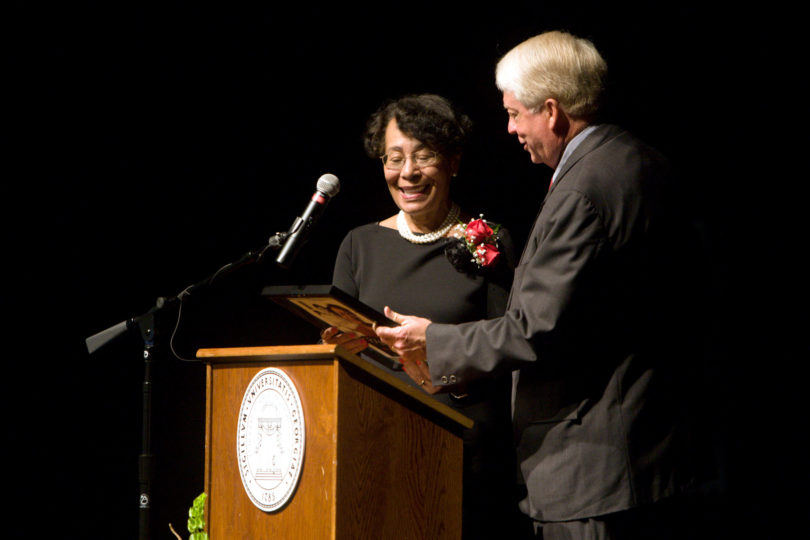 President Michael F. Adams presents Mary Frances Early with a copy of the proclamation honoring the 50th anniversary of her graduation from UGA.

There was very little fanfare at the Fine Arts Auditorium in August 1962 when Mary Frances Early became the first African American to earn a degree at the university.

“Though it was understated and no one spoke to me at the time, it was big,” said Early, at an Aug. 15 ceremony marking the 50th anniversary of the occasion. “I don’t mean for me. It was a time when UGA changed forever. UGA would never be the same as before.”

The moment was at last properly marked this month when the university hosted a celebration of Early’s graduation in the same auditorium where she turned her graduation tassel 50 years ago. Among those in attendance was Louise Hollowell, the widow of civil rights attorney Donald Hollowell, who served as lead counsel in the landmark legal case that led to the desegregation of UGA.

Early came to the university as a music education graduate student in 1961. At the time she applied, she was already taking graduate-level classes at the University of Michigan.

She enrolled at UGA after Hamilton Holmes and Charlayne Hunter became the first African Americans to register for classes at UGA. The two civil rights trailblazers faced difficulties in their academic pursuits from both state officials and fellow students.

Early said she switched schools to provide moral support for Holmes and Hunter. Her enrollment was inspired by the civil rights student movement and the public demonstrations that were drawing national attention.

“I wanted so much to participate in sit-ins and picketing with them, but I was a music teacher,” she said. “I did not want to jeopardize my job.

“I chose the thing that I could do,” she added. “I chose to come here.”

In doing so, Early also faced racially charged intimidation tactics during the application process and once she arrived on campus. Despite all that, Early earned her master’s degree in music education and went on to a notable career in teaching. In 1967, she received a specialist degree from UGA, also in music education.

At the ceremony, UGA President Michael F. Adams said the graduation observance was a good occasion to think about the university’s history.

“It is appropriate that we as an institution pause to think about those successes and certainly some of the shortcomings of the past 50 years,” he said.

One of the shortcomings, he noted, was that Early’s accomplishment as the first African-American to graduate was largely overlooked for nearly 40 years.

When the university finally did reach out to Early, Adams said, “in her typical grace and character, she embraced us back.”

Early has since become active with the university. An annual lecture series, a professorship and a music education scholarship have been named in her honor.

At the ceremony, Early was a quiet presence until she took to podium at the end of the program.

“I sort of feel like I’ve died and gone to heaven,” she said, after having her praises sung by students, faculty and university alumni. But she deflected the notion that her graduation and the anniversary celebration of it were some grand personal achievement.

“This occasion is not just for me, but it’s for all of those African-American students who have come, who have applied and studied, who have received degrees,” she said. “It’s for those who are studying now for a degree and for those yet to come. That graduation is about all of us.”