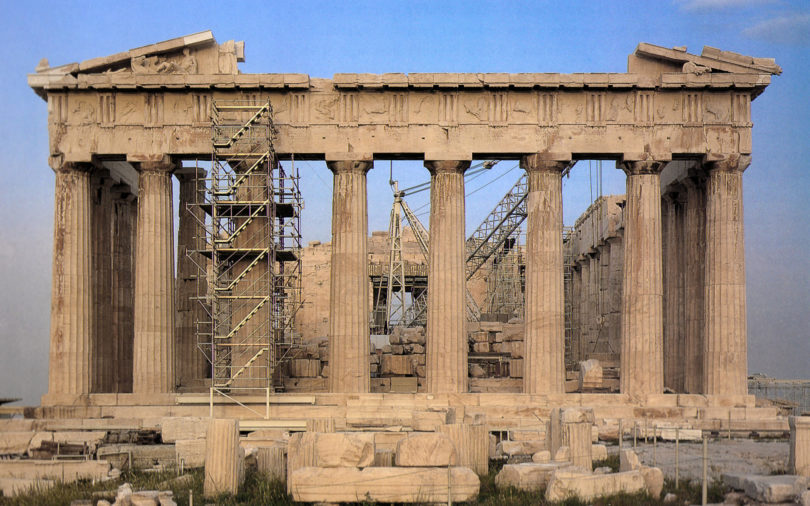 The Parthenon was built for the goddess Athena on the Acropolis of Athens between 447 and 432 B.C. (Courtesy of the Acropolis Restoration Service)

Athens, Ga. – The University of Georgia will host a two-day international symposium, “Rethinking the Parthenon: Color, Materiality and Aesthetics” Oct. 17-18.

The international symposium will bring scholars to UGA to present recent research on the Parthenon, a temple built for the goddess Athena on the Acropolis of Athens between 447 and 432 B.C. The conference is free and open to the public; registration is required.

Sponsored by the Jane and Harry Willson Center for Humanities and Arts, the Lamar Dodd School of Art, the department of classics, the Polychromy Network and anonymous donors, the symposium is hosted by the Georgia Museum of Art in conjunction with the exhibition, “An Archaeologist’s Eye: The Parthenon Metope Drawings of Katherine A. Schwab.”

The symposium will focus on three interrelated aspects of the Parthenon: its color, its materiality and its aesthetics. New interdisciplinary research in London and on the Acropolis in Athens has uncovered remains of ancient painting on the sculptures and architecture of the Parthenon. These discoveries add new insights to old discussions of the building’s decoration. The diversity of the Parthenon’s construction materials, including white marble, bronze, ivory, gold and pigments are of critical importance, the complex symbolism and material aesthetics of the religious use of these materials.

Robin Osborne, a professor of ancient history at Cambridge University, will deliver the keynote speech, “The Parthenon as a Work of Art,” Oct. 17 at 5:30 p.m. in the M. Smith Griffith Auditorium at the Georgia Museum of Art following a 5 p.m. reception.

Oct. 18 will feature lectures from 9:30 a.m. until 5 p.m. from nine scholars who will discuss new insights on the building’s colorful decoration, the diversity of the Parthenon’s construction materials and shifting theories on its fundamental aesthetics.

“This symposium promises to be an important event not only for specialists in ancient Greek art and culture but for anyone interested in new ways of seeing and rethinking the past,” said Naomi Norman, head of the classics department. She is co-organizing the symposium with Mark Abbe, an assistant professor of ancient art in the school of art.

“The symposium will present the most recent research and discoveries on the color and building of the Parthenon, astonishing findings that require new ways of looking at this perhaps all-too-familiar icon of western identity,” Abbe said. “The international symposium on our campus offers a unique opportunity and promises to enrich both our understanding and appreciation of the Parthenon and its historical and cultural role in the development of classical Greek aesthetics.”

For more information and to register, see http://www.rethinkingtheparthenon.com.