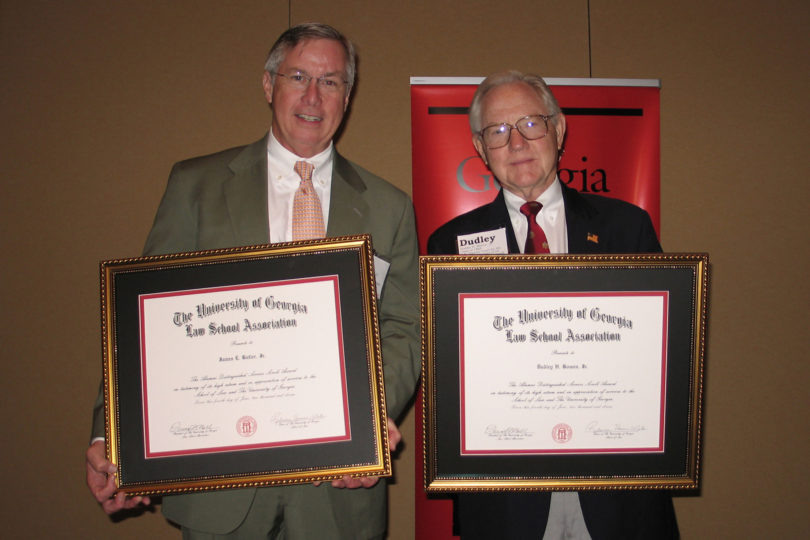 Athens, Ga. – The University of Georgia School of Law’s alumni association recently honored longtime U.S. District Court Judge Dudley H. Bowen Jr. and Columbus attorney James E. Butler Jr. with its Distinguished Service Scroll Award for their dedication and service to the legal profession and the law school. Given annually, this award is the highest honor bestowed by the Law School Association.

Bowen’s award was presented to him by friend and colleague Chief Judge Lisa Godbey Wood of the U.S. District Court for the Southern District of Georgia, who also is a Georgia Law alumna. In her remarks, Wood attributed Bowen’s success to his ability to determine what really matters and thanked him for his work in strengthening judicial independence.

“The way Judge Bowen carries himself and conducts himself in court and [how he] lives his life has made him the undisputed leader of the bar in Augusta, Ga., and has brought prestige to the federal judiciary and to lawyers in general,” she said. “… Where I come from and where I have been, people stand [in respect] for Judge Bowen.”

Upon receiving the award, the 1965 Georgia Law graduate said if he has done anything right, it was because he was surrounded by great people.

“I’ve been very fortunate to have 47 years in a profession that’s populated by the finest people in the world-Georgia lawyers,” Bowen said. “… I have the most wonderful colleagues … and when you are around people who have such a sense of duty and such a sense of professional excellence, it is hard to not have some of that rub off on you.”

Bowen, who still hears cases as a senior judge, has served on the bench of the U.S. District Court for the Southern District of Georgia for almost 35 years.

Prior to being appointed to the U.S. District Court, where he was chief judge from 1997 to 2004, Bowen was a bankruptcy judge for the Southern District of Georgia, worked as a general practitioner in Augusta, and served as an infantry officer and legal officer in the U.S. Army, where he was awarded a Commendation Medal.

Bowen also has served as a member of Georgia Law’s Board of Visitors, as director and treasurer of the Southeastern Bankruptcy Law Institute and as director of the Federal Judges Association.

Presenting Butler’s award was Georgia Law alumnus George W. Fryhofer III, who has served as a partner with Butler for 18 years in the law firm of Butler, Wooten & Fryhofer.

“What distinguishes Jim from any other lawyer I’ve ever seen or known is that he is superb at all of it,” Fryhofer said. “He is a tenacious trial lawyer, a brilliant persuasive writer and a deadly effective advocate, whether in a brief or in person. In truth, Jim is a lawyer’s lawyer, and I am lucky and proud to be his partner.”

After receiving the award, Butler reflected on his close ties with Georgia Law and thanked the school for helping in his success.
“The law school has meant more to me than just giving me an education,” Butler said. “… Over the years, the people at [Georgia Law] have supported me and our law firm constantly … and I really think [this] has played a key role in the success I have enjoyed in my career.”

Butler, who graduated from Georgia Law in 1977, has litigated cases in 27 states, tried more than 170 civil cases to verdict, appeared before more than 100 trial judges and has been counsel in dozens of reported appellate decisions. He has set the record verdict in Georgia four times during his career.

On campus, his service included establishing the James E. Butler Scholarship, which covers the cost of tuition for a law student in each class who is interested in pursuing a public interest law career. In addition, he is a two-time former chair of the law school’s Board of Visitors.