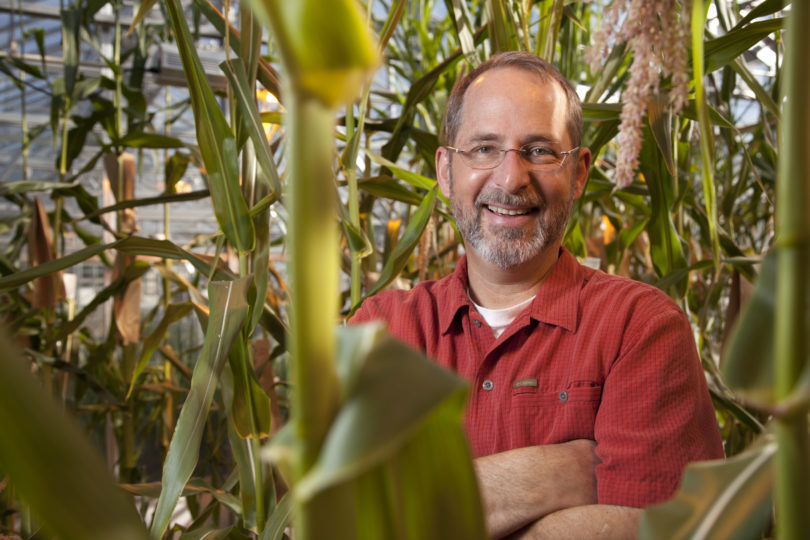 Kelly Dawe is a Distinguished Research Professor in UGA’s Franklin College of Arts and Sciences.

When the human genome was first sequenced in 2001, the project focused on a single individual. Since that time, several new genomes have been assembled and additional genetic data have been generated for thousands of individuals, producing a more complete picture of human genetic makeup, with broad implications for human health, from biomedical science to anthropology. Now, researchers plan to begin a similar process with corn.

Though corn, or maize, is the most widely planted and most genetically diverse crop in the world, practically all genomic analysis of corn relies heavily on a single inbred line. Modern breeding efforts to improve productivity increasingly require deeper genetic variety for more marginal environments and uses, requiring a more complete understanding of maize genomic diversity.

Researchers at the University of Georgia, Iowa State University and Cold Spring Harbor Laboratory in New York will work together to sequence, assemble and annotate 26 different lines chosen to represent the diversity of corn. The National Science Foundation-funded project will combine leading edge DNA sequencing technology with a technique called optical mapping to produce high-quality genome assemblies with characterization and release of the 26 lines in two years.

To go from a single reference to a broad perspective on the entire genetic repertoire of genes and gene expression patterns will be a major step forward in how we approach genome analysis in crops,” said Kelly Dawe, Distinguished Research Professor in UGA’s Franklin College of Arts and Sciences department of genetics and principal investigator on the grant. “It’s something that has not happened for any crop at this scale.

The research team will create what is referred to as the pangenome of corn, a representation of the species-level diversity of genes. By sequencing many lines, the research will identify new combinations of genes that are duplicated or rearranged, appearing in some lines multiple times and in others only once or not at all. Extra copies often show novel expression or confer unique traits that would remain unknown if only one line was sequenced.

“The sequenced lines will include varieties from both tropical and temperate regions, and their sequences should help us understand how corn has adapted to these different environments,” said Matt Hufford, a co-principal investigator on the project and assistant professor at Iowa State University. “Understanding the ways corn adapts can facilitate development of lines for novel conditions.”

“This is one way evolution works—changes in gene expression patterns may affect the health of the organism, so duplicate copies arise, with mutations and slightly different functions, different timing of expressions and different responses to conditions,” Dawe said.

Genome assembly involves extracting DNA and cutting it into smaller fragments, which are sequenced and reassembled to represent the actual genome using powerful computers and algorithms. The initial reassembly consists of hundreds or thousands of unordered sequence fragments. Optical mapping, a technique for constructing a long, ordered framework map, allows researchers to assemble a more accurate and contiguous representation of the genome.

“The technology gives us the ability to organize the pieces exactly where they are supposed to go, allowing us to rapidly confirm the placement and speed up the entire assembly process,” Dawe said.

The speed of the project, along with a single team of scientists working on the set of 26 lines to produce the pangenome, is among its primary strengths. Rather than occur piecemeal, one line sequenced at a time, the results will produce a vast new resource of high-quality genetic information, going from one line to 26.

The assemblies, along with information about the genes and their expression patterns will be cataloged and made available to the public through the Gramene.org data resource by co-principal investigator Doreen Ware at Cold Spring Harbor Laboratory.

“Without a large single project, we would have had a scattered set of assemblies, put together by different groups at different times using different technologies,” Dawe said.

“Using the same method, at the same time, performed by the same people, you afford others the ability to do accurate comparisons—it’s a real experiment.”