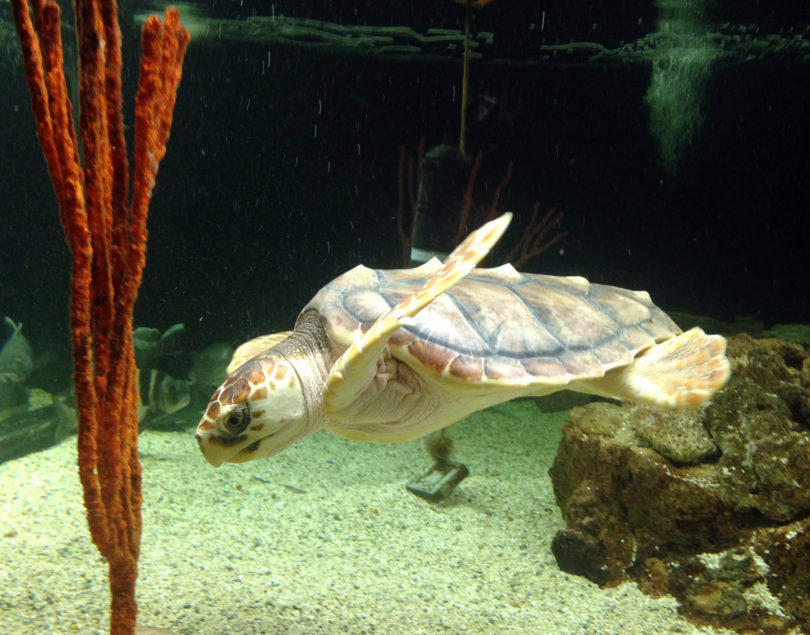 Ossabaw hatched on Ossabaw Island in August 2011. The turtle will be released Sept. 8

Savannah, Ga. – The University of Georgia Marine Extension Service, a unit of the Office of Public Service and Outreach, will release a three-year-old loggerhead sea turtle named Ossabaw from the shores of Wassaw Island National Wildlife Refuge on Monday, Sept 8.

Ossabaw hatched on Ossabaw Island in August 2011. The turtle was discovered still in the nest and likely would not have survived if the Georgia Sea Turtle Cooperative network hadn’t intervened. Mark Dodd, wildlife biologist and sea turtle program coordinator for the Georgia Department of Natural Resources, gave the hatchling to the UGA Aquarium, where it has thrived under the care of the Marine Extension Service’s staff, interns and volunteers, and has served as an ambassador for sea turtle education.

The UGA Aquarium collaborates with the U.S. Fish and Wildlife Service and the Caretta Research Project to accept new hatchling stragglers. The hatchlings live at the facility for three to four years before being released or transferred to a larger home at the Georgia Aquarium in Atlanta. Approximately 70,000 people have met Ossabaw at the UGA Aquarium and learned about loggerheads on the Georgia coast.

“It’s an amazing experience to watch them grow and develop,” said Lisa Olenderski, assistant curator at the UGA Aquarium. “Letting Ossabaw go is a little bittersweet. It’s sad to say goodbye, but we’re giving this sea turtle the chance to live a full life.”

Ossabaw, whose gender won’t be known until adulthood, started as a palm-size hatchling and now weighs 40 pounds. Ossabaw’s shell, or carapace, is about 22 inches long. In the turtle’s first days on display in a 1,600-gallon tank, Ossabaw showed a feisty side by ripping up rocks and chewing on décor. As a result, the tank had to undergo modifications to ensure Ossabaw’s well being, and the filtration system had to be changed, Dumont said.

“During the last several months, I’ve often compared Ossabaw to a rambunctious teenager who likes to make a mess in their bedroom,” he said.

Five sea turtle species nest along the Georgia coast. While loggerheads are the most common, they are listed as threatened by the U.S. Fish and Wildlife Service and the Georgia Department of Natural Resources. After about 35 years of conservation efforts at the federal and state level, the DNR reports nesting numbers on the Georgia coast have been increasing dramatically over the last several years.

Ossabaw’s release has been approved by DNR and will be supervised by U.S. Fish and Wildlife. Kris Williams of the Caretta Research Project will tag Ossabaw with coded number tags prior to being released. The tags will indicate Ossabaw’s identity if encountered again by people in the future.

Note to media: Media wishing to cover the event should make arrangements in advance by contacting Devin Dumont, curator of the UGA Aquarium on Skidaway Island, at 912-598-2337 or dumont@uga.edu.