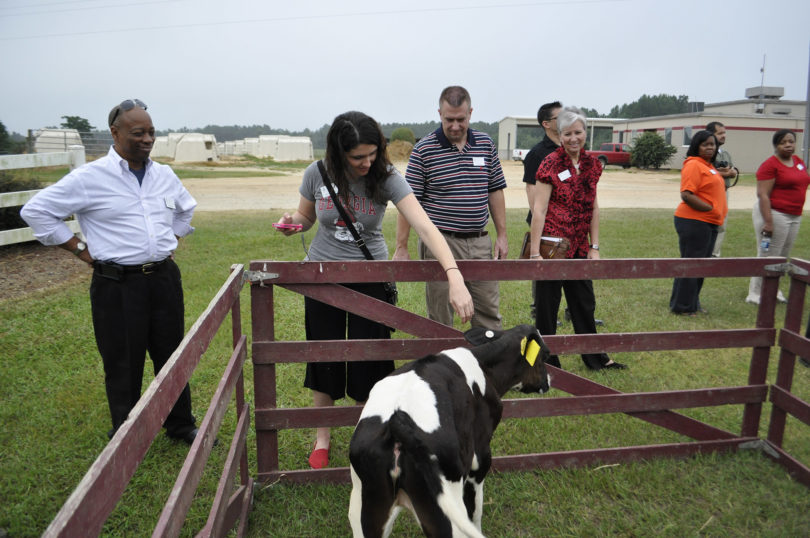 Athens, Ga. – Almost 40 tenured or tenure-track academic faculty and public service faculty will travel the state next week as part of the University of Georgia Public Service and Outreach New Faculty Tour, designed to help newcomers to the university better understand the geography, demographics, diversity, economy, history and culture of Georgia.

The tour will leave from the Georgia Center for Continuing Education Aug. 1 following welcome remarks from UGA President Jere W. Morehead. The first stop will be at Jaemor Farms near Gainesville, where faculty members will see an example of the growing agritourism industry and hear from Georgia Commissioner of Agriculture Gary Black about the significance of agriculture to the state’s economy.

From there the tour will visit Amicalola Falls in the north Georgia mountains; the state Capitol in Atlanta; the National Center for Civil and Human Rights in Atlanta; Raleigh Studios and the town of Senoia; Kia Motors Manufacturing in West Point; the Little White House in Warm Springs; the Carnegie Library in Americus; the UGA campus in Tifton; the CSX Rice (rail) Yard in Waycross; UGA Marine Extension and Georgia Sea Grant on Skidaway Island in Savannah; historic Savannah; the Georgia Ports Authority in Garden City; and Sandersville, one of UGA’s Archway Partnership communities.

The New Faculty Tour was launched in 1977 after the Georgia business community indicated it wanted to see more understanding and collaboration between Georgia industry and higher education. More than 1,400 UGA faculty members have made the tour, which has been held all but seven years since it first began. Those years-1991, 2003-2004, and 2009-2012-tours were canceled because of budget constraints.

“This whirlwind tour helps our new faculty members see firsthand the diversity in Georgia’s economy, its culture and people and better prepares them for the classroom,” said Jennifer Frum, UGA vice president for public service and outreach. “Faculty members who have taken the tour often have discovered ways in which their teaching and research can help Georgia communities address some of the challenges they face.”