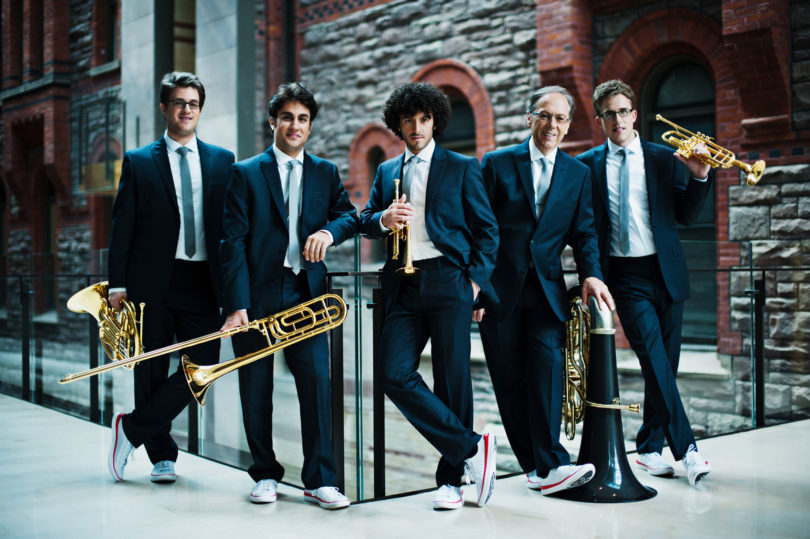 Athens, Ga. – The University of Georgia Performing Arts Center will present the Canadian Brass, the world’s foremost brass quintet, on Feb. 21 at 8 p.m. in Hodgson Concert Hall. According to the Washington Post, “These are the men who put brass music on the map.”

Formed in 1970, the Canadian Brass has introduced millions of fans around the world to brass music. The ensemble’s eclectic repertoire features brass standards as well as a wide-ranging library of original arrangements, including classical works, holiday favorites, ragtime, Dixieland and jazz.

Boasting a discography of more than 90 albums, the Canadian Brass has sold over two million albums. The group continues to top the Billboard charts, most recently with the 2010 recording of patriotic songs and marches Stars & Stripes: Canadian Brass Salute America, which spent eight weeks in the Top 25 on the Billboard Classical Chart.

Through 40 years of touring, the Canadian Brass has earned an international fan base from Australia to Russia to the Middle East. The group was the first brass ensemble from the West to perform in the People’s Republic of China, in addition to being the first brass group to play at Carnegie Hall.

The Canadian Brass has entertained millions of television viewers with appearances on The Tonight Show, The Today Show, Entertainment Tonight, Evening at Pops, Sesame Street and numerous PBS specials. The Canadian Brass also was featured on the soundtrack to the 1988 film The Couch Trip, starring Dan Aykroyd and Walter Matthau.

Onofre and Ligaya Paguio are the performance underwriters.

Note to editors: An image of the Canadian Brass is available for download at http://multimedia.uga.edu/media/images/Canadian_Brass_1.jpg.