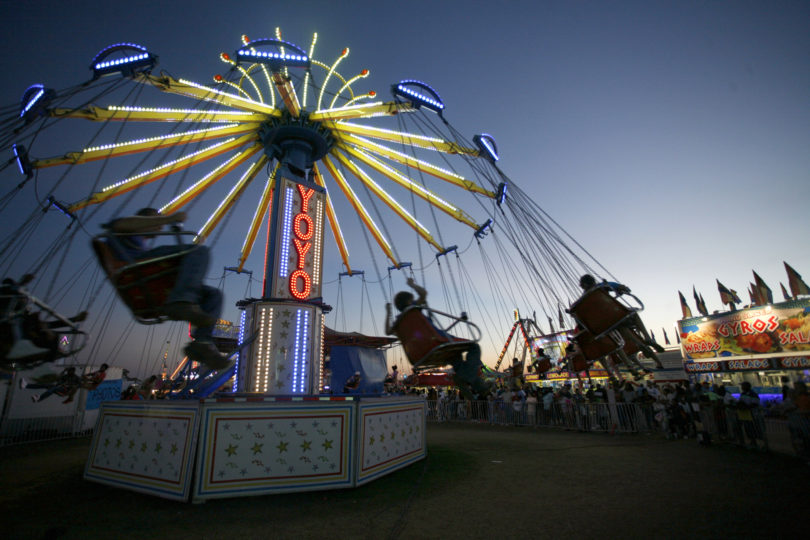 Fair attendees on the Yoyo ride at the Georgia National Fair in Perry on Oct. 11.  Photo by Ian Palmer

Perry, Ga. – The Georgia National Fairgrounds in Perry became a classroom for a group of University of Georgia photojournalism students, whose work will create a visual archive of the 25-year-old event.

Students in Mark E. Johnson’s advanced photojournalism class in the Grady College of Journalism and Mass Communication spent Oct. 11, at the fair, taking photos of the fairgoers, competitions and entertainment.

“By showing the community what is happening and documenting an event that touches on state agriculture, entertainment and industry, we are providing a service to the community,” said Johnson, senior lecturer of photojournalism. “And those who weren’t there can understand it and those that were can remember it.

“What we want to do is help the Georgia National Fair build up their visual archive as they celebrate their 25th anniversary,” Johnson said. “There’s a rich history of photographs of fairs, we want to contribute to that.”

Students researched in advance how other photographers have covered state and world fairs so they could get an idea of what they would see and how they could cover it differently.

During the 12-hour day, students took tens of thousands of photographs, focusing on the candid image so that future generations can look back at the timeless moments captured.

And while this event was a learning experience, one of Johnson’s main priorities is helping students understand that photography is a community service.

“At its core, we believe journalism is a type of community service. Through workshops like this we get the students to see the impact they can have on a community,” Johnson said.

Students also had the opportunity to work with professionals on improving their photos. Throughout the day they spoke to five different editors who shot alongside them and provided immediate feedback.

“You can see improvement in the students as the day goes on,” Woody Marshall, director of photography at the Macon Telegraph said. “An editor can tell someone how to pan a picture, but it’s easier to show them.”

Following the event, students provided the Georgia National Fair with a set of edited images to bolster their archive. The Macon Telegraph published an online gallery of the student’s photographs on Oct. 12. Marshall will follow up with students by assessing their work and how it reflects what he has seen in his years covering the fair.

Students received donations from the department of journalism and photojournalism alumni and partnered with the Georgia National Fair, the Macon Telegraph and the Perry Area Convention and Visitors Bureau on the project. They also received a grant from the UGA Office of Service-Learning, a unit of the offices of the vice president for public service and outreach and the vice president for instruction.