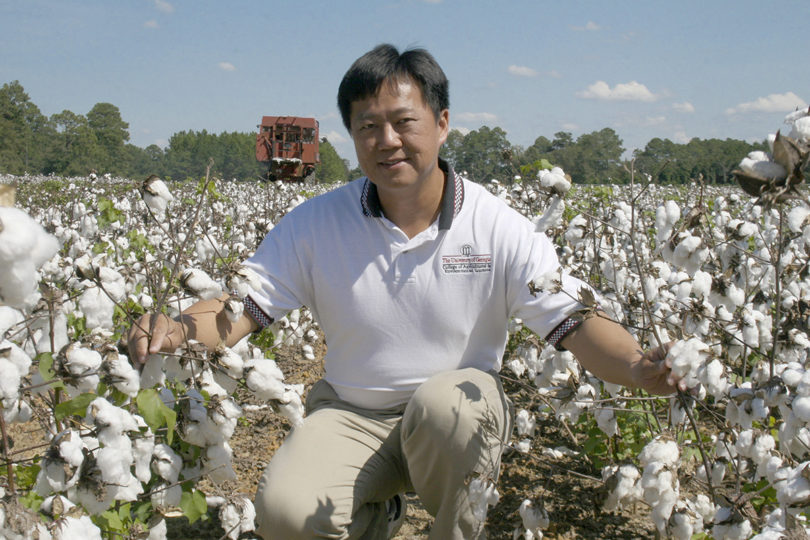 A career in cotton breeding wasn’t the first career path Peng-Wah Chee envisioned as a child growing up in Malaysia, but it’s turned out to be the right one for the UGA scientist.

Chee always was interested in science and agriculture, but his true passion lies in plant breeding and genetics, the area of study he pursued at North Dakota State University, where he earned his doctoral degree in 1998.

A member of the faculty in the College of Agricultural and Environmental Sciences on the UGA Tifton campus for 15 years, Chee said the biggest challenge in cotton breeding is simultaneously improving lint yield and fiber quality.

“In the last 15 years, we have added genomics to our breeding toolbox to help us develop a better cotton variety. The genomics tool we have available now will have a huge impact moving forward. Fifteen years ago, we basically knew nothing about these genes in the cotton genome, but now we do,” Chee said.

In 2012, Chee was involved in an international consortium led by CAES scientist Andrew Paterson. The focus of the consortium was to sequence the cotton genome, which allowed UGA researchers to pinpoint genes for characteristics such as resistance to certain diseases, yield and quality. With this knowledge, Chee now manipulates the cotton genome and designs more efficient and proficient cotton plants.

Chee also has made significant progress in understanding the genetics of fiber quality.

“Cotton is an industrial crop, meaning that it’s grown as a commodity or raw material for industrial goods, rather than as food for consumption. Because the textile industry is highly mechanized, stringent requirements have been imposed on raw fiber to satisfy the manufacturing process,” Chee said. “While lint yield is the most important criteria for cotton producers, fiber quality also is very important because each 480-pound bale of cotton being sold in the market has to meet certain minimum quality standards, and if these standards are not met, it can result in significant price discounts.”

Further, Chee has advanced understanding of the inheritance of resistance and developed tools for incorporating nematode-resistant genes into modern cultivars.

“Our lab has developed DNA markers for the resistance genes that will allow breeders to make selections in breeding populations without having to traditionally screen for individual plants to identify those that are resistant,” Chee said.

Unlike 20 years ago when U.S. cotton was grown and used here, today’s cotton is produced here, but is most often exported.

“To stay competitive with cotton produced in Australia, Brazil, India or other cotton-producing countries, we need to provide growers with cotton cultivars that have better quality than what is now available,” he said. “We have commercial cultivars with acceptable fiber quality, but none of them are exceptional.”

He also works to improve cotton’s resistance to parasitic nematodes, microscopic worms that damage the plant’s root system and prevent the plant from getting appropriate amounts of water and nutrients.

U.S. farmers need improved cotton cultivars to stay competitive with cotton-producing countries overseas and with synthetic fiber manufacturers. According to the U.S. Department of Agriculture, the U.S. ranks third in cotton production behind China and India, and produces more than $25 billion in cotton products and services annually. Georgia has the second largest cotton acreage in the country. According to the UGA Center for Agribusiness and Economic Development, cotton is a $1.2 billion industry and accounts for 42 percent of Georgia’s row-crop production.