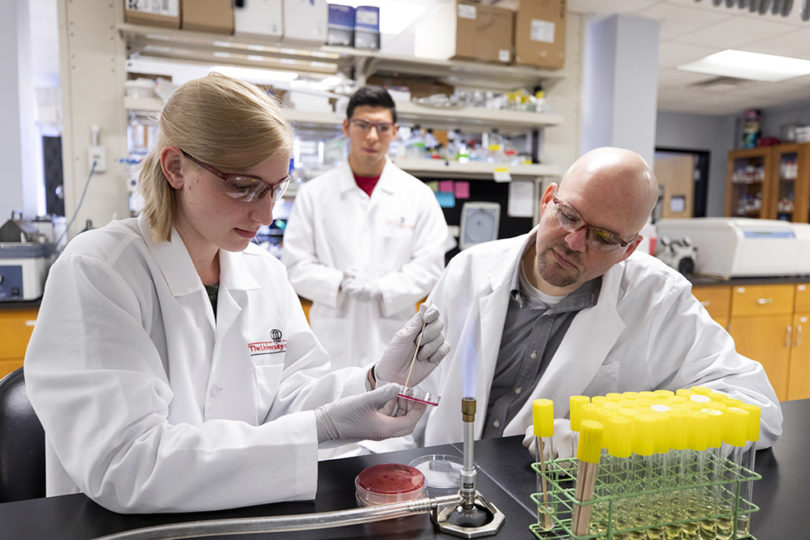 The University of Georgia continued a multi-year expansion of grant-funded research programs in fiscal year 2019, increasing its economic impact on the state. Research and development expenditures reached a record high of $477.5 million—a robust increase of 5.4 percent over the previous year. Over the past five years, the university’s R&D expenditures have jumped by more than 34 percent. 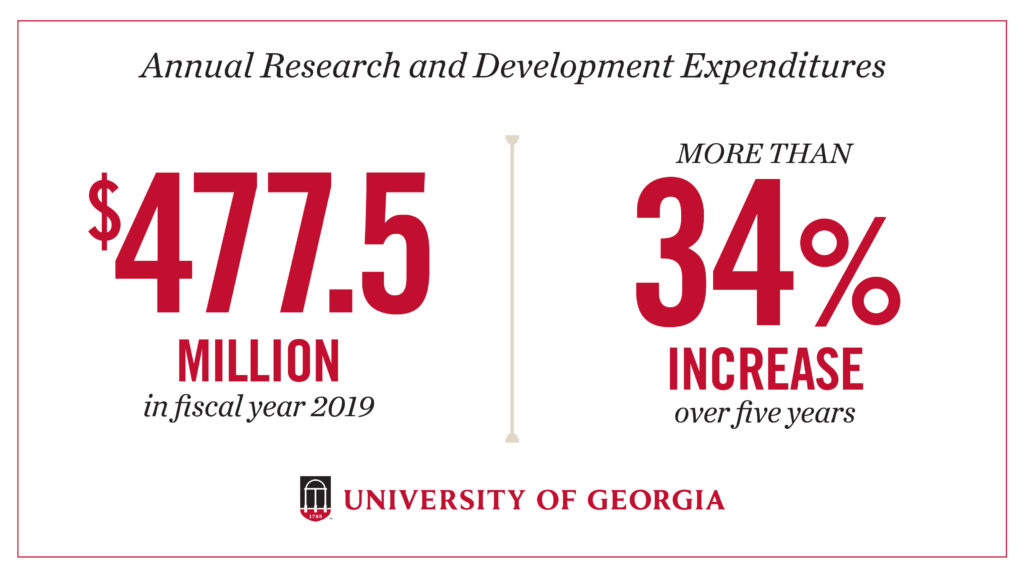 “As UGA grows its research enterprise, we are expanding our positive impact on the world while strengthening the economy of our home state,” said President Jere W. Morehead. “Gains in agricultural productivity; improvements to health care; the creation of new, marketable products—these are just a few of the many benefits stemming from UGA’s research and development that are driving our increased economic impact on Georgia, which is now estimated at $6.5 billion per year.”

The growth in research expenditures is due to the success of UGA faculty in winning grants and contracts. Notable recent examples include Georgia Research Alliance Eminent Scholar Ted Ross in the College of Veterinary Medicine, who last fall received an award of up to $130 million from the National Institutes of Health to develop a universal flu vaccine; Distinguished Research Professor Jessie Kissinger in the Franklin College of Arts and Sciences, who won two awards in the past year totaling up to $16.2 million to develop health informatics databases; and associate professor David Okech in the School of Social Work, who since 2018 has been awarded nearly $20 million from the U.S. Department of State to combat human trafficking.

The success of UGA faculty in competing for grants extends across the university. UGA’s Willson Center, for example, has received more than $600,000 since 2018 from the Andrew W. Mellon Foundation, denoting record levels of grant funding in the humanities.

UGA currently ranks No. 57 among U.S. universities in the National Science Foundation’s survey of overall R&D expenditures. The ranking, which lags a year behind, is based on UGA’s FY2018 R&D expenditures of $453.2 million.

“Increases in external research funding at the University of Georgia signal our growing role in addressing urgent challenges to health, security and community vitality,” said S. Jack Hu, the university’s senior vice president for academic affairs and provost. “I appreciate the dedication of our faculty and staff to applying their expertise to benefit society. As an institution, we are committed to expanding the impact of our research even further.”

UGA’s Innovation District initiative was created last year in part to expand upon the university’s interest and success in translating research activity into commercial products and applications. UGA currently ranks first among U.S. universities for the number of new products brought to market annually, and more than 775 products based on UGA research have been introduced to the market to date.

Over the past four years, invention disclosures from UGA investigators have risen 60 percent and licensing revenue has grown 70 percent. For more than a decade, UGA has ranked among the top 10 U.S. universities for the number of technology license agreements signed by industry and among the top 20 public universities for licensing revenue. In some cases, bringing UGA discoveries to market is best done by starting new companies, and this number is trending upward as well. The number of startups born out of UGA research has jumped 150 percent since 2015.

“UGA’s growth as a research university is due to the successes of our faculty and their research colleagues in generating and translating new knowledge, as well as to the strategic investments made by the university and our friends and partners across the state,” said David Lee, vice president for research. “With exciting initiatives like the Innovation District and capital expansions like the $65 million Interdisciplinary I-STEM Research Building currently under construction, I look forward to notable expansion in the years to come.”