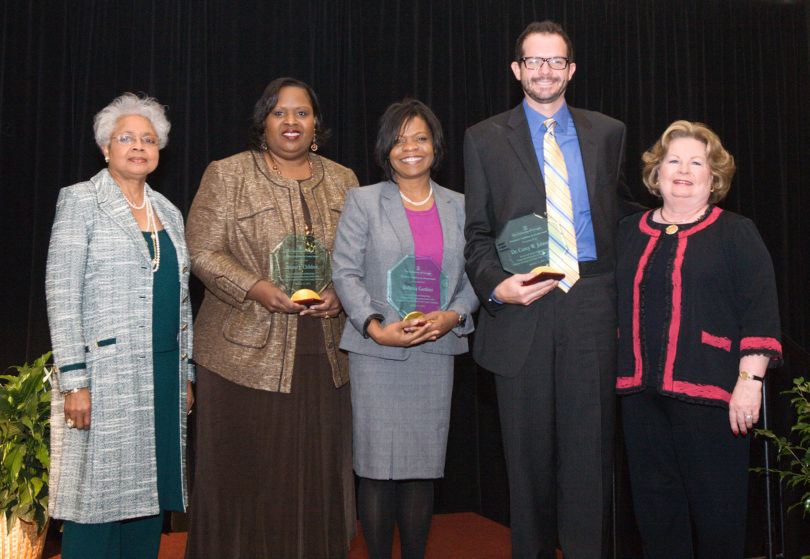 Athens, Ga. – The University of Georgia presented a faculty member, a doctoral student and a UGA retiree with the 2012 President’s Fulfilling the Dream Awards on Jan. 13 as part of the annual Martin Luther King Jr. Freedom Breakfast sponsored by UGA, the Athens-Clarke County Unified Government and the Clarke County School District.

Those awarded were Corey Johnson, an associate professor in the UGA College of Education; Roberta Gardner, a doctoral student and graduate teaching assistant in the department of language and literacy education in the College of Education; and Attawa J. Childres, a retiree who worked at UGA for 30 years. They were honored because of their work in the Athens-Clarke County community to make King’s dream of equality and justice a reality.

Billye Aaron, an advocate for higher education for African-American citizens and the wife of baseball legend Hank Aaron, was the keynote speaker for the event.

In determining recipients, the awards committee considered each applicant’s significant contributions to the advancement of social justice, human rights and/or race relations; promotion of King’s example of volunteerism and civic engagement to address critical community issues; use of his philosophy to reduce tensions, resolve conflict and foster goodwill; and efforts to use King’s teachings to build bridges of understanding and unity.

Johnson oversees the recreation and leisure studies program as a graduate coordinator in the department of counseling and human development. He also is an affiliate faculty member with the qualitative research program and the Institute for Women’s Studies. He teaches courses in leisure history and philosophy, social and contemporary issues in leisure services, research methods, event management and experiential education.

Gardner’s research as a doctoral student centers on cross cultural and racial literacy, specifically as it relates to creating bridges between the literate lives of teachers, students and families. She also is a teacher consultant with the UGA Red Clay Writing Project.

Childres is a life-long Athens resident who is dedicated to giving to her community. She spent a decade serving as an Athens-Clarke County community peer proposal reviewer, and since 1985, she has been assistant director of the Athens Area Teen Pageant, a yearlong recruitment, training and mentoring program designed for young girls from Athens’ African-American communities. She also is the owner of Classic Designs, a desktop publishing business.