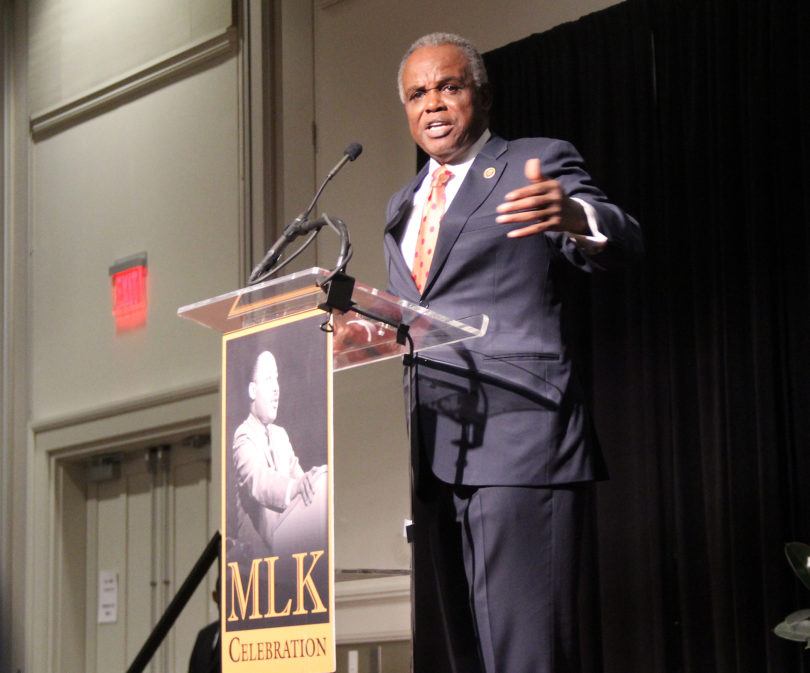 Mark Dawkins, associate dean for academic programs and an associate professor of accounting in the Terry College of Business; Ernest Hardaway, assistant superintendent of human resources for the Clarke County School District; and Dervin Cunningham, a fourth-year biological science major, all received the 2014 President’s Fulfilling the Dream Awards for their work in the Athens-Clarke County community to make King’s dream of equality and justice a reality.

Dawkins teaches undergraduate and graduate financial accounting classes at UGA. He oversees eight of Terry College’s nine undergraduate degree programs, as well as Terry College’s five master’s programs. He served as the Terry College’s first director of diversity relations from 2004-2008 and continues to support Terry’s diversity efforts. He served as president of UGA’s Black Faculty and Staff Organization for five years (2007-2012) and continues to serve on the group’s executive committee. He has an open door policy and often meets with students over lunch to discuss their progress at UGA and career options after graduation. He and his wife, Janyce, host students, faculty and staff at their house several times each year.

Hardaway has been with the school district for 40 years and has worked as a middle school science teacher, assistant principal, director of the parent information center, director of plant services, deputy superintendent, interim superintendent and executive director of student support services. He is a member of the Classic City Golf Association, which is a group of local African-American golfers that holds an annual fundraiser for youth in the community. The group helps support students in need with transportation and supplies to attend college. He is a Clarke County School District liaison to the NAACP education committee. He has participated in the school’s dropout roundup, where he visits the homes of dropouts on the Martin Luther King Jr. holiday.

Cunningham aspires to become a medical doctor and is interested in preventive and holistic care. A first generation college student, Cunningham is the son of Jamaican immigrants. He grew up in Albany. He has volunteered with the local Boys and Girls Club, the Clarke Middle School band, the Troy Burgess Mentoring Program and UGA Miracle’s Dance Marathon fundraising program. He is a member of the Roosevelt Institute, the Blue Key Honor Society and the Gridiron Secret Society. He is the co-founder of Project R.A.I.S.E., which aims to increase the retention of African-Americans and Latinos in science. Cunningham has been part of the Peach State Louis Stokes Alliance for Minority Participation, which uses recruitment and retention initiatives to increase the number of minority students who complete undergraduate degrees in science, technology, engineering and mathematics fields.

U.S. Rep. David Scott was the keynote speaker for event.

The Martin Luther King Jr. Freedom Breakfast, the President’s Fulfilling the Dream Awards and the Impact Award are spearheaded by the UGA Office of Institutional Diversity. For more information about the office, see http://diversity.uga.edu.