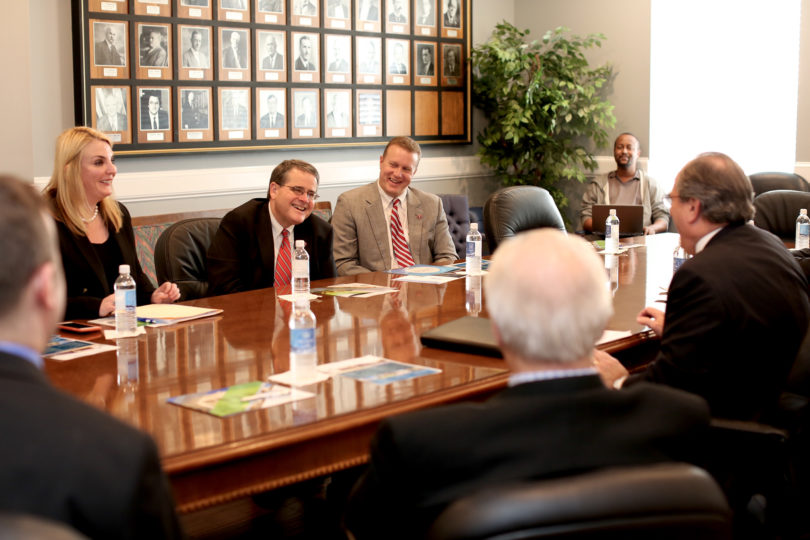 A meeting with Macon-Bibb County Mayor Robert Reichert Jan. 4 was an opportunity for UGA President Jere W. Morehead to learn more about the assistance the university provided Macon-Bibb before, during and after its government consolidation.

“As a land- and sea-grant university, part of our mission is to connect the resources of the University of Georgia to communities throughout the state,” Morehead said. “Through our outreach programs, we help revitalize rural downtowns, develop community leadership pipelines, train local elected officials and help governments, like Macon-Bibb County’s, operate more efficiently and effectively. These efforts lead to greater economic vitality for the state as a whole.”

Macon and Bibb County officials launched the formal process to consolidate their two governments in 2011, contracting with UGA’s Carl Vinson Institute of Government to work with a transition task force to help merge services and policies, set an initial budget and establish a strategic plan. The consolidated government launched Jan. 1, 2014. In addition, the Vinson Institute provides ongoing training to elected officials and professional staff.

Reichert told Morehead Jan. 4 that the consolidation has been a success for the county in many ways:
• Government spending has been cut by 20 percent, while services to citizens have become more streamlined and efficient, as well as more equitable.
• Industries and businesses are expressing renewed and stronger interest in locating and expanding in Macon-Bibb County.
• Elected officials are speaking with one voice instead of competing, creating a single government strategic plan.
• Partner agencies and organizations can more easily align with government now that there is a singular focus.
• Macon-Bibb County has won state and national awards for its programs, plans, departments and people.
• The community has a renewed sense of optimism toward government.

“Macon-Bibb is very thankful for the assistance of the Carl Vinson Institute of Government the past five years as we’ve built a new government,” Reichert said. “Their support, facilitation and expertise have proven invaluable in creating the government our community asked for, and we’re delighted to share our—and their—success story with President Morehead.”

In addition to assisting with consolidation, the Vinson Institute launched its Georgia Certified Economic Developer Program in Macon in March. The certificate program offers a series of courses to economic development professionals that provide practical, skills-based training, customized for Georgia communities.

The Institute of Government will continue its work with Macon-Bibb County in 2017 by facilitating a strategic planning retreat for the commission and senior staff. This retreat will help update Macon-Bibb’s award-winning strategic plan and set project priorities for the upcoming Special Purpose Local Option Sales Tax.

In addition to the Vinson Institute, other units of UGA public service and outreach have provided expertise to help strengthen the economic base of Macon-Bibb County and the surrounding region.