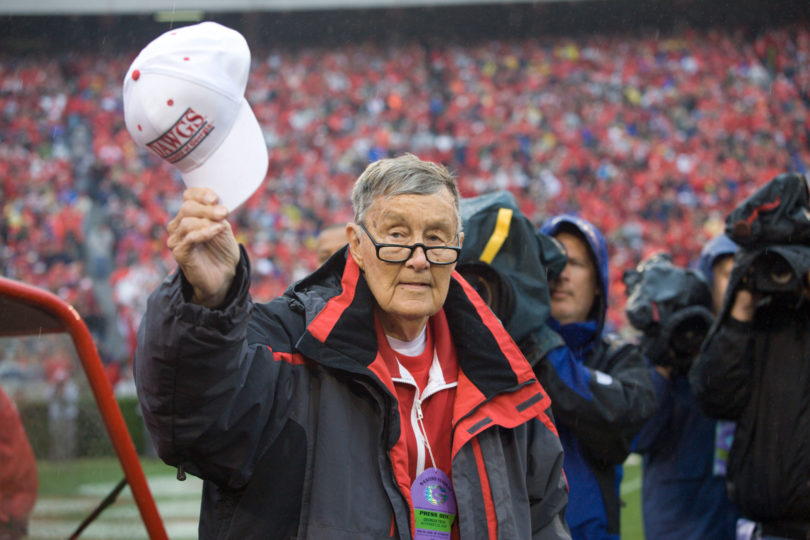 Athens, Ga. – Larry Munson, legendary voice of the Georgia Bulldogs for 42 years, died at his Athens home Sunday night of complications from pneumonia according to his son, Michael.

Today, University of Georgia President Michael F. Adams said, “Larry Munson exemplified the excellence that we believe is the symbol of all the University of Georgia does today. He was loved by thousands of alumni and friends, and was completely devoted to this university and all its athletic teams. He will be greatly missed by all of us. Mary and I extend our deepest sympathy to all the Munson family.”

Funeral arrangements had not been determined.

Munson wrapped up a lifetime of sports broadcasting in the fall of 2008, most of which was spent with the Georgia Bulldogs from 1966 to 2008. His dramatic delivery, along with an unabashed partisanship for the Bulldogs, endeared him to generations of UGA fans.

The Georgia job, which Munson landed in 1966, was the latest and longest lasting in a career that has covered over 60 years. He has been duly honored by several organizations for his outstanding contributions to broadcasting.

Born Sept. 28, 1922, in Minneapolis, Munson is an alumnus of Moorehead State Teachers College in Moorehead, Minn. After World War II, he used his military discharge pay to enroll in broadcasters school back home in Minneapolis. He followed 10 weeks of training by landing an assignment to work at a small radio station in Devil’s Lake, N.D.

This job started a series of short-term jobs for Munson behind the microphone, the last of which took him to Cheyenne, Wyoming. He had gotten the job by recording an audition tape of a football game between Ohio State and Minnesota, replete with canned crowd noise and special effects.

During his time in Cheyenne, Munson befriended another young broadcaster who later gained national fame: Curt Gowdy, who was calling University of Wyoming football and basketball games at the time. When Gowdy left Cheyenne for a Double A baseball job in Oklahoma City, he recommended that Munson replace him. It was the break that Munson sought.

In 1949, when Gowdy joined Mel Allen on the New York Yankees radio crew, he again recommended Munson for the job inOklahoma City. Munson eventually spent three years broadcasting baseball there before making his next move.

He left Oklahoma City for Nashville, Tenn., in 1952, taking a job calling games for the Nashville Vols, a minor-league affiliate of several teams, including the New York Giants, Cincinnati and Minnesota. It was a career move that led him into other broadcasting directions. He served a stint as a Nashville disc jockey and also started what was believed to have been the first-ever TV show on fishing. Munson continued to host the fishing show long after he left Nashville for Georgia in the mid-1960s.

While in Nashville, Munson also made his second venture into collegiate athletics. He called Vanderbilt University football and basketball games over the powerful airwaves of AM station WSM.

But in 1966 Munson got his big break into major-league baseball when he landed a job calling Atlanta Braves baseball in their inaugural season. As the Braves’ first spring training began, he read a newspaper story about the departure of Georgia football announcer Ed Thilenius. He then made an inquiry to UGA athletics director Joel Eaves, whom he had known during his days at Vanderbilt. Eaves offered him the Georgia football job during that first phone call.

During his career as the Bulldogs¹ play-by-play man, Munson has held a variety of auxiliary jobs. He called games for the Georgia basketball program from 1987-96 and for the Atlanta Falconsfrom 1989-92. He has also hosted various sports talk shows on radio and TV.

In 1983, Munson was recognized by the Georgia General Assembly for his role in the Georgia championship football program. Fourteen years later the same legislative body, led by Governor Zell Miller, honored him with a proclamation celebrating his 50 years in broadcasting.

Munson was also the 2003 recipient of the Chris Schenkel Award, given annually by the National Football Foundation and College Hall of Fame. The award recognizes broadcasters with long and distinguished careers in broadcasting college football, as well as their contributions to community service. He was also named winner of the 2008 Furman Bisher Award for Sports Media Excellence presented by the Atlanta Sports Council.

On Nov. 17, 2007, Munson was named a UGA “Honorary Football Letterman” and presented with a letterman’s plaque and jacket at the Georgia-Kentucky game.