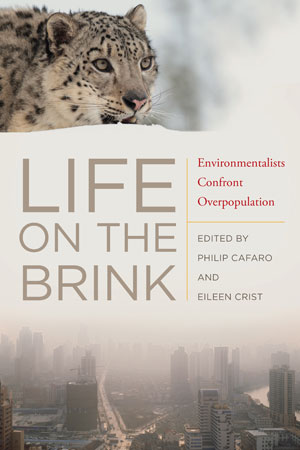 Life on the Brink: Environmentalists Confront Overpopulation, a new title by the UGA Press, aims to reignite a robust discussion of population issues among environmentalists, environmental studies scholars, policymakers and the general public.

The book is edited by Philip Cafaro, a professor of philosophy at Colorado State University, and Eileen Crist, an associate professor at Virginia Tech.

Some of the leading voices in the American environmental movement restate the case that population growth is a major force behind many of our most serious ecological problems, including global climate change, habitat loss and species extinctions, air and water pollution, and food and water scarcity. Contributors argue that ending population growth worldwide and in the U.S. is a moral imperative that deserves renewed commitment.

Creating genuinely sustainable societies requires major change to economic systems. Life on the Brink is an invitation to join the discussion about building a better future.