(The University of Georgia’s Innovation Gateway was featured on WSB-TV’s newscast on Jan. 10)

Building on its continued growth in research and innovation, the University of Georgia ranked first among 193 U.S. institutions for the number of commercial products reaching the market in 2017, according to a survey released by AUTM, a nonprofit organization that tracks technology transfer among universities, colleges and other research institutions.

In 2017, 52 new products based on UGA research reached the market, outpacing the second-place institution (University of Michigan), which had 37. UGA also ranked fourth among universities for the number of new intellectual property licenses to industry, its 11th consecutive year in the top 10. 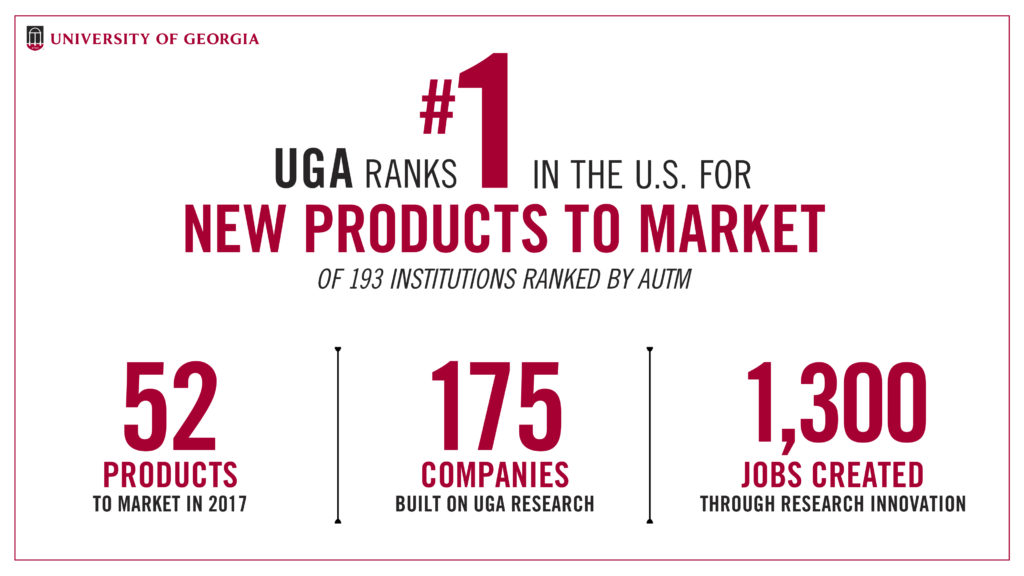 “The success we are experiencing results from strategic decisions to support and encourage a wide-ranging culture of research and innovation that promotes economic development and helps elevate the University of Georgia to the top tier of research universities in the United States,” said President Jere W. Morehead. “We are not only expanding the research activity on campus and our ability to attract sponsored research dollars but also expanding our partnerships with industry to make research-based products available to the world.”

The university pours much of the income it derives from licensing new technologies to industry back into the research enterprise through initiatives such as the Cultivar Development Research Program. Since 1997, this program has provided nearly $20 million in internal grant funding, resulting in the generation of more than 300 novel plant cultivars. This year the program was a finalist in the national University Economic Development Association’s Awards of Excellence, which recognize outstanding and innovative programs in economic development.

This commercialization activity benefits from the expanding research enterprise at UGA. Over the past five years, the university has achieved a 29 percent increase in overall research and development expenditures. As a result, UGA has risen from 64th to 53rd in the National Science Foundation’s latest R&D rankings of universities, with $455 million in expenditures in fiscal year 2017.

“I believe we’re only just starting to realize UGA’s potential to catalyze the most creative and entrepreneurial ambitions of our amazing faculty and students,” said David Lee, vice president for research. “It takes a complex ecosystem to support the multiple pathways to successful innovation, entrepreneurship and commercialization, whether through the licensing of new inventions to industry, helping faculty and students to start their own companies, or other activities. Ensuring these opportunities are robust will help to keep UGA intellectually vibrant in the 21st century and will contribute to our state’s economic growth.”

Fueled partly by the success of Innovation Gateway and UGA’s student entrepreneurship program—which has grown from just 33 students in 2016 to 420 students in 2018—UGA is developing an innovation district on its campus in Athens. The district will serve as a catalyst for the university’s entrepreneurial activity, connecting faculty, students and industry partners to create economic value out of UGA’s intellectual activity and make a positive economic impact in Georgia and beyond. To date, more than 175 startup companies have been created out of UGA research, resulting in more than 1,300 jobs and an estimated annual economic impact of more than $128 million.