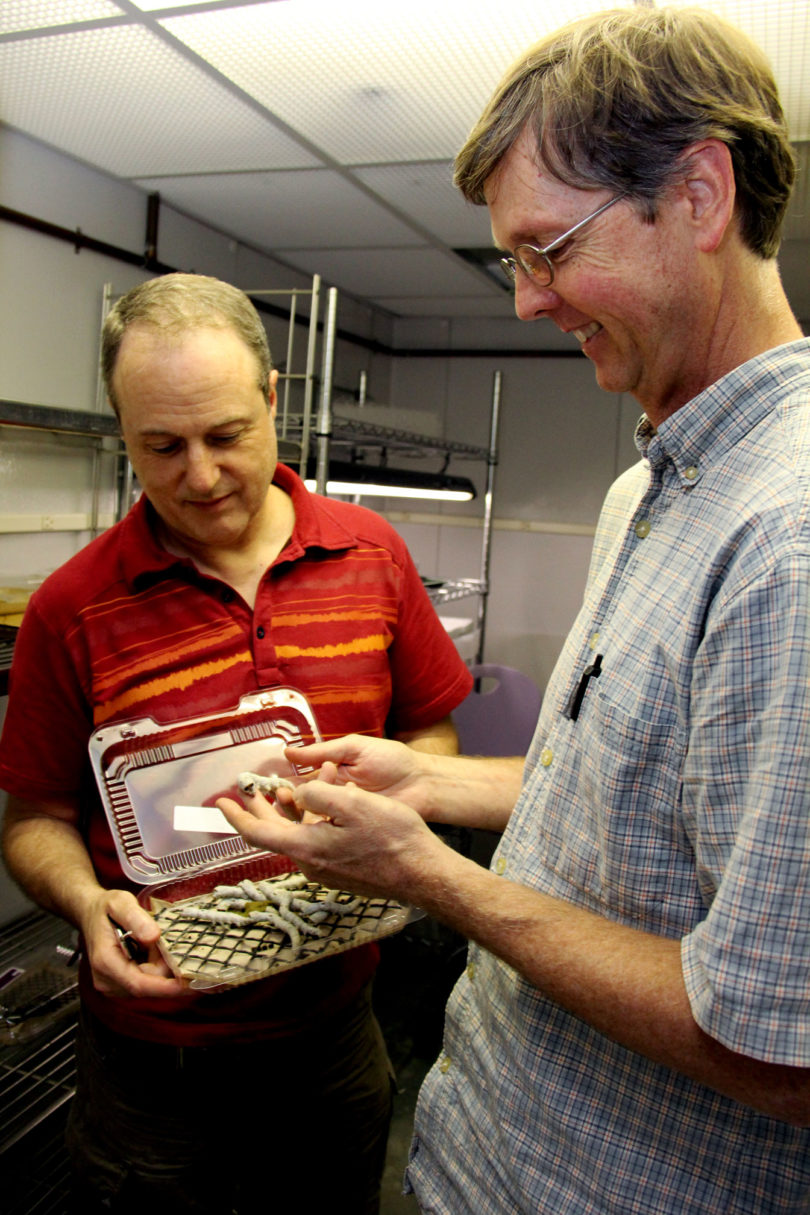 Athens, Ga. – In humans, a polymer called melanin determines skin, eye and hair color—the darker the skin, the more melanin in a person’s body. For insects, melanin is a major aspect of their immune defense systems—their blood darkens in response to pathogens.

For scientists who study insects, having a correct model of how an insect forms melanin is important for not only their research on insect structures but also on how to control them. In a new study, published May 17 in the Journal of Biological Chemistry, University of Georgia entomologists find that the model they and other scientists have been using is wrong.

“For 50 years or so, people have been studying melanization in insects, and a model has been built as a way of understanding how it functions,” said Kevin Clark, an associate research scientist of entomology in the College of Agricultural and Environmental Sciences. “They got a lot of things right, but some fundamental aspects have been ignored.”

Traditional models assume that activation of a single enzyme, called phenol oxidase, is sufficient to cause melanization. Results from the study coauthored by Clark and Michael Strand, a Regents and Distinguished Research Professor of Entomology, finds several essential steps are ignored in the current model.

Like a set of dominos, each action in the insect immune system is triggered by another reaction. Technically called the phenol oxidase cascade, this system of enzymes regulates the melanization of blood in insects. Melanization occurs when an insect is infected and melanin surrounds the infecting pathogen, generating free radical byproducts that work to kill the infection. In both humans and insects, the essential amino acid tyrosine is used to synthesize melanin.

“It is a fundamental part of the immune system,” Strand said. “A misinterpretation of how this enzyme cascade is activated is a crucial deficiency in the literature. If this paper has any impact, it would be that it is changing the view of what is functionally required for this to operate.”

The research confirms that, like humans, phenol oxidase uses tyrosine to make melanin but requires a scaffold of other components. However, the literature had grown to support other molecules besides tyrosine as the starting substrates.

“People have largely ignored tyrosine because it has always been a terrible substrate for the purified form of the enzyme,” Strand said. “There are other substrates that work very well, but those substrates are nonsensical for being the start of the reaction because they are unstable. And they just don’t exist in a bugs’ body, but for decades experiments were taking place using these substrates because they work and the starting substrate (tyrosine) that should work never works very well.”

Having the right components in the model is essential in order to manipulate or exploit the insect system. Programs currently taking place in other countries are looking at how to replace insect populations in the field with those modified to have fewer undesired traits. Specifically, researchers hope to modify insects to make them incapable of passing on human and animal diseases. For example, a mosquito that lacks the ability to transmit malaria could be a possibility in the future.

“One of the inherent problems with disease vectors, such as mosquitos, is that their immune systems do not effectively recognize and attack pathogens before they are transmitted to humans,” Clark said. “Therefore, numerous labs are attempting to genetically manipulate mosquitos to produce a more effective immune response that would destroy the pathogens.”

Potential targets for this manipulation are proteins within the pathway that activate melanization. A proper understanding of how melanization works is essential to the success in choosing the proper targets to enhance this immune response, Clark explained.

Clark and Strand used a silk moth to study the mechanisms at work when insects activate the melanization process. Using a large insect model, researchers were able to study how genes code for interactions with one another. Tyrosine was the only substrate for phenol oxidase they found in silk moth blood.

“We are looking at the interaction of products, which is much more about biochemistry rather than genetics,” Strand said. “With this information, we can go back to the smaller insects and apply the lessons learned. It is not a case of knowing genes; it is knowing how the products of those genes interact.”

The researchers are now looking at the mechanism that links melanization and clotting in insect populations.

“Our research suggests they are very much connected to each other, in ways that are still unclear,” Clark said. “The whole process of melanization is much more complex than we realized. All the steps that lead up to the activation of the enzyme itself are by themselves complex, but now there is a whole other series of steps that occur after that we have not been paying attention to, and that is what we want to learn about now.”