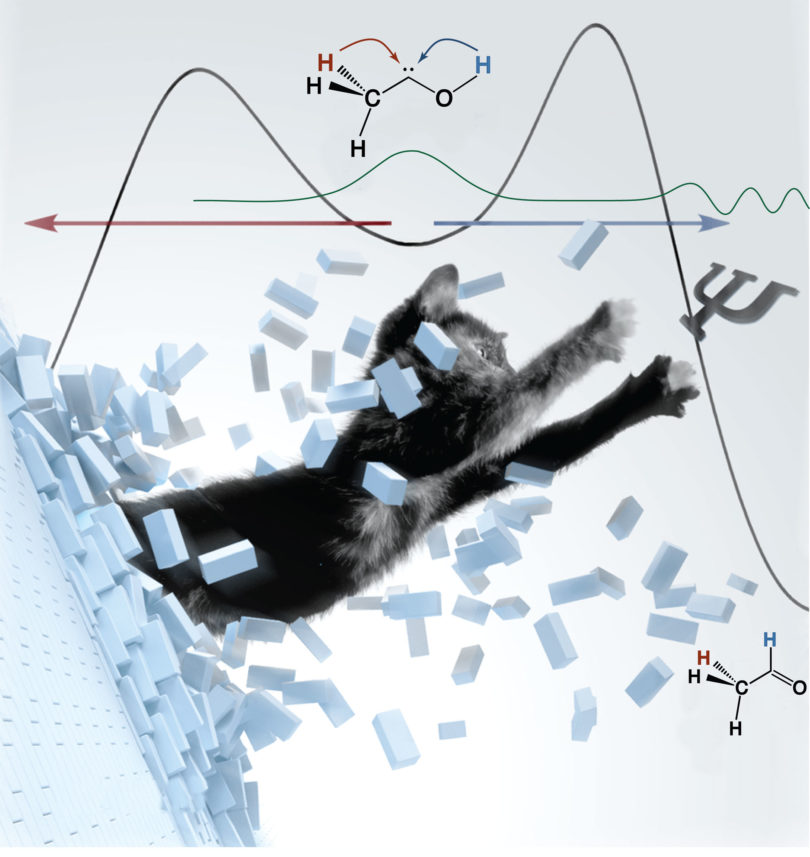 Athens, Ga. – New research just published in the journal Science by a team of chemists at the University of Georgia and colleagues in Germany shows for the first time that a mechanism called tunneling control may drive chemical reactions in directions unexpected from traditional theories.

The finding has the potential to change how scientists understand and devise reactions in everything from materials science to biochemistry.

The discovery was a complete surprise and came following the first successful isolation of a long-elusive molecule called methylhydroxycarbene by the research team. While the team was pleased that it had “trapped” the prized compound in solid argon through an extremely low-temperature experiment, they were surprised when it vanished within a few hours. That prompted UGA theoretical chemistry professor Wesley Allen to conduct large scale, state-of-the-art computations to solve the mystery.

“What we found was that the change was being controlled by a process called quantum mechanical tunneling,” said Allen, “and we found that tunneling can supersede the traditional chemical reactivity processes of kinetic and thermodynamic control. We weren’t expecting this at all.”

What had happened? Clearly, a chemical reaction had taken place, but only inert argon atoms surrounded the compound, and essentially no thermal energy was available to create new molecular arrangements. Moreover, said Allen, “the observed product of the reaction, acetaldehyde, is the least likely outcome among conceivable possibilities.”

Other authors of the paper include Professor Peter Schreiner and his group members Hans Peter Reisenauer, David Ley and Dennis Gerbig of the Justus-Liebig University in Giessen, Germany. Graduate student Chia-Hua Wu at UGA undertook the theoretical work with Allen.

Quantum tunneling isn’t new. It was first recognized as a physical process decades ago in early studies of radioactivity. In classical mechanics, molecular motions can be understood in terms of particles roaming on a potential energy surface. Energy barriers, visualized as mountain passes on the surface, separate one chemical compound from another.

For a chemical reaction to occur, a molecular system must have enough energy to “get over the top of the hill,” or it will come back down and fail to react. In quantum mechanics, particles can get to the other side of the barrier by tunneling through it, a process that seemingly requires imaginary velocities. In chemistry, tunneling is generally understood to provide secondary correction factors for the rates of chemical reactions but not to provide the predominant driving force.

“We knew that the rate of a reaction can be significantly affected by quantum mechanical tunneling,” said Allen. “It becomes especially important at low temperatures and for reactions involving light atoms. What we discovered here is that tunneling can dominate a reaction mechanism sufficiently to redirect the outcome away from traditional kinetic control. Tunneling can cause a reaction that does not have the lowest activation barriers to occur exclusively.”

Allen suggests a vivid analogy between the behavior of methylhydroxycarbene and Schrödinger’s iconic cat.

“The cat cannot jump out of its box of deadly confinement because the walls are too high, so it conjures a Houdini-like escape by bursting through the thinnest wall,” he said.

The fact that new ideas about tunneling came from the isolation of methylhydroxycarbene was the kind of serendipity that runs through the history of science. Schreiner and his team had snagged the elusive compound, and that was reason enough to celebrate, Allen said. But the surprising observation that it vanished within a few hours raised new questions that led to even more interesting scientific discoveries.

“The initiative to doggedly follow up on a ‘lucky observation’ was the key to success,” said Allen. “Thus, a combination of persistent experimentation and exacting theoretical analysis on methylhydroxycarbene and its reactivity led to the concept I dubbed tunneling control, which may be characterized as `a type of non-classical kinetic control wherein the decisive factor is not the lowest activation barrier’.”

While the process was unearthed for the specific case of methylhydroxycarbene at extremely low temperatures, Allen said that tunneling control “can be a general phenomenon, especially if hydrogen transfer is involved, and such processes need not be restricted to cryogenic temperatures.”

Allen’s research was funded by the U.S. Department of Energy.

For more information about UGA’s Franklin College of Arts and Science department of chemistry, see http://www.chem.uga.edu/.