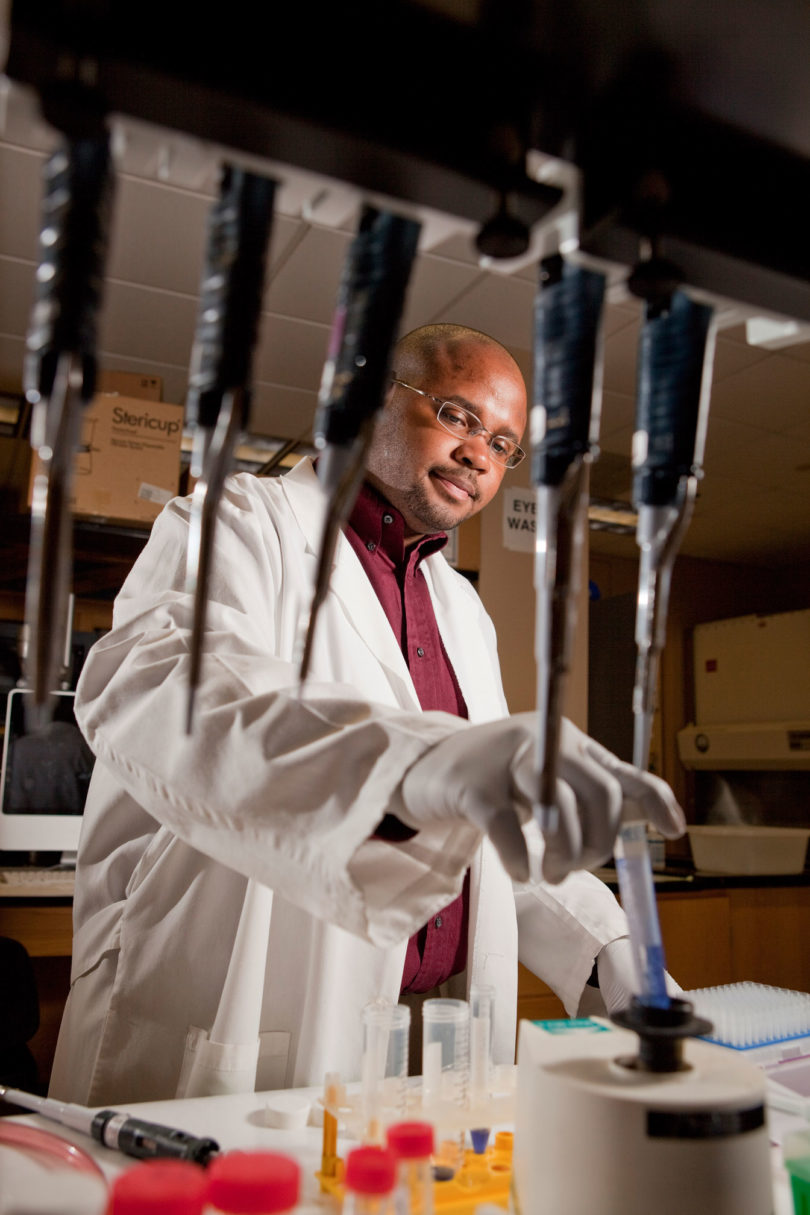 Franklin West is testing ways to use neural cells from pigs to help stroke and Parkinson's victims.

Athens, Ga. – Franklin West, a University of Georgia assistant professor of animal and dairy science in the College of Agricultural and Environmental Sciences, has been named one of the nation’s top scholars under 40 by Diverse: Issues in Higher Education magazine.

West, who is on the steering committee for the UGA Regenerative Bioscience Center, works closely with center director Steve Stice, a Georgia Research Alliance Eminent Scholar. They recently discovered that pluripotent stem cells can be used in pigs without causing tumors. His research is now focusing on how pig stem cells can develop into cells of the central nervous system to ultimately help patients who have suffered from stroke or traumatic brain injury.

To date, there is only one FDA approved treatment for stroke and none for traumatic brain injury. Using a pig stem cell therapy model, West and collaborator Dr. Simon Platt, a UGA College of Veterinary Medicine neurosurgeon, are working to unlock the secrets of how stem cells can effectively and safely treat human patients.

“Frank is a rising star, and this award is well deserved,” Stice said. “At an early stage in his career, he has already demonstrated strengths in intellect, teaching, research and collegiality.”

West received a bachelor of science degree in biology from Morehouse College and a doctorate in stem cell biology from UGA. Prior to joining UGA in 2009, he was a consultant with Aruna Biomedical, an Athens-based biotechnology company.

West was a MARC (Minority Access to Research Careers) U-Star Research Fellow and a David and Lucille Packard Research Fellow at Morehouse College. He has been published in several national and international scientific peer-reviewed journals for cellular biology.

West, along with 11 other scholars under the age of 40, was featured on Jan. 5 in the special Emerging Scholars edition of Diverse: Issues in Higher Education as the magazine kicked off 2012 by recognizing rising stars in the academy. Each scholar was selected based on research, educational background, publishing record, teaching record, competitiveness of field of study and uniqueness of field of study.

“Dr. West is a dynamic scientist working in one of the most exciting and promising areas of biology,” said J. Scott Angle, dean and director of the College of Agricultural and Environmental Sciences. “I can’t wait to see what he does in his career, and I know we are all going to be better off because of his efforts. Few scientists have gotten off to such a good start to their careers.”