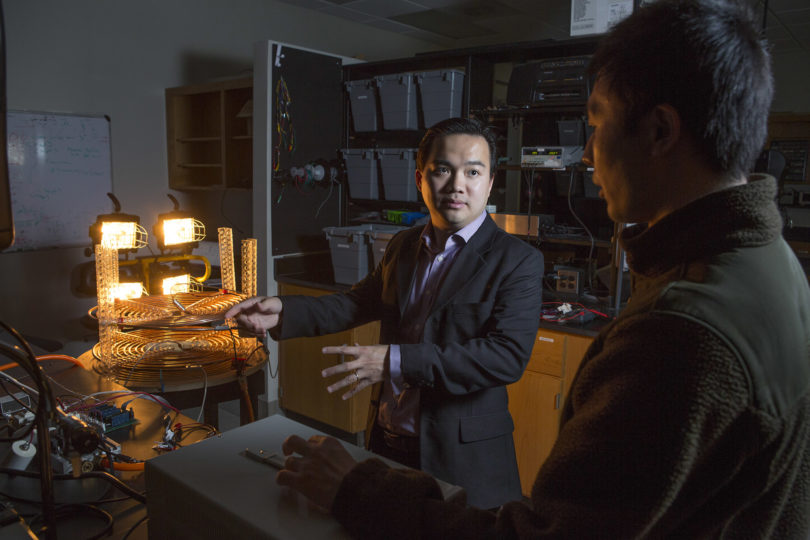 It’s easy to trace the beginnings of Zion Tse’s career as a biomedical engineer. Tse’s father, an electronics technician in Hong Kong, often would bring his work home and allow young Zion to disassemble and reassemble fans, air conditioning systems and other devices.

“I even stripped down part of my dad’s car at one point. I think now they call that experiential learning,” Tse said jokingly.

This hands-on approach to learning still resonates in Tse’s teaching and research at UGA, where he’s an assistant professor in the College of Engineering and a member of the university’s multidisciplinary Regenerative Bioscience Center.

“Hands-on experience is essential for students studying interdisciplinary fields such as biomedical engineering because it involves the mechanical, electrical, physical, biological and chemical functions of organisms,” Tse said.

Tse’s Medical Robotics Laboratory in the Driftmier Engineering Center is nothing if not hands-on. At one end of the lab, a graduate research assistant is outfitting a quadricopter drone with ultrasound sensing technology so it can map the inside of large power plants. At the other end, Tse’s team has erected a bright blue metal scaffold and two large coils of copper tubing to study wireless charging of electric vehicles. In between, Tse and his student researchers are creating an enhanced imaging system for heart catheterization procedures.

“When I first started my research at UGA I focused entirely on medical robotics but as time went by, I realized there was a need for research in other areas to help meet the needs of the state,” Tse said.

Tse joined the fledgling UGA College of Engineering in 2012 following a post-doctoral research fellowship at Harvard Medical School and its teaching affiliate, Brigham and Women’s Hospital in Boston.

Tse said his proudest accomplishment since joining UGA is an ongoing collaboration with researchers and physicians at Emory University Hospital.

“In the last three years we have been involved in some promising research on a new treatment for amyotrophic lateral sclerosis or Lou Gehrig’s disease,” he said. “We’re designing a robotic system that allows the injection of stem cells into the ventral horns of a patient’s spinal cord with a high degree of precision.”

Previous research in small animal models has shown stem cell therapy may halt the degeneration and death of motor neurons associated with ALS. But the current procedure to deliver stem cells involves invasive surgery, including the removal of part of the vertebra covering the spinal canal. Tse said a robotic positioner created by the team, SpinoBot, is designed to deliver stem cells with a needle under MRI guidance.

Tse also is collaborating with the National Institutes of Health in Bethesda, Maryland, on the development of a robotic system to treat prostate cancer.

“Medical robotics is a field that’s very translational,” Tse said. “What you have designed today can be used relatively quickly in patients and you can see the results quickly.”

Tse, who teaches courses in engineering physiology, electronics and mechatronics systems engineering, believes his research is a powerful teaching tool.

“As a researcher, I can be in touch with state-of-the-art knowledge, and I can apply that knowledge to my classroom teaching,” he said. “I can show students how robotics is being used in medicine today. The students get excited. They can learn from not only their textbooks but also from the real-life examples of cutting-edge diagnostic and surgical techniques that I introduce in the classroom.”