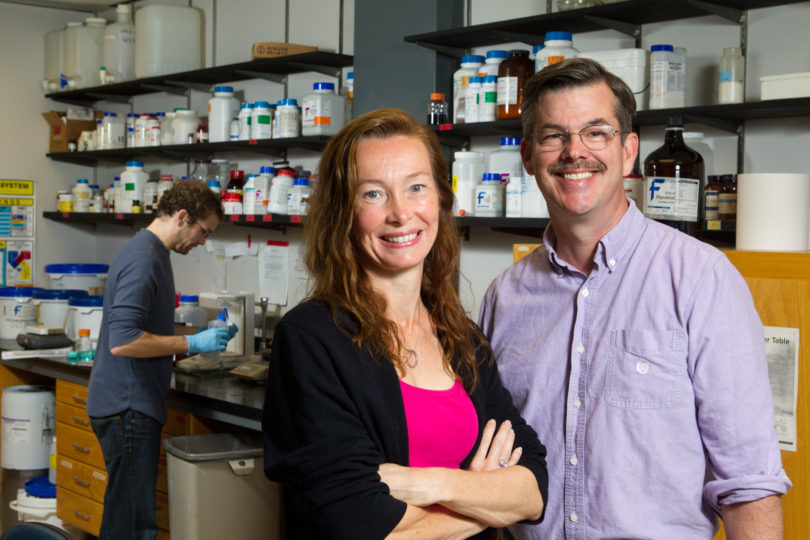 Athens, Ga. – Bacteria and archaea are among the smallest forms of life on the planet, but don’t let their size fool you. These simple creatures have persevered for billions of years, thanks in part to a recently discovered immune-like defense system that protects them from marauding infectious agents like viruses and plasmids.

University of Georgia researchers Michael and Rebecca Terns were some of the first to describe how the bacterial immune system works in a 2009 paper published in Cell. Now, thanks in part to two grants from the National Institutes of Health totaling more than $2.4 million, the Terns lab hopes to find ways of manipulating this bacterial immunity that could have far-reaching implications for a variety of biotechnological and biomedical industries.

“Bacteria, from the pathogens that you hear about on the news to the microbes that normally live in and on our bodies, play a whole range of diverse and important roles in human lives,” said Rebecca Terns, senior research scientist in Biochemistry and Molecular Biology in UGA’s Franklin College of Arts and Sciences. “What we’re studying is a defense system that protects bacteria from viruses.”

The fact that bacteria are vulnerable to viruses is a double-edged sword, because bacteria are both powerful enemies and essential allies. On one hand, pathogenic bacteria cause serious and debilitating diseases in humans. On the other hand, many bacteria serve protective functions, or are used in industries to clean wastewater, make food, produce medicine and make plastics.

Once they have a better understanding of the various mechanisms involved in bacterial immunity, the Terns lab hopes to develop methods to protect helpful bacteria and destroy those that make people sick.

When a bacterium encounters an invader like a virus, it recognizes the viral DNA, chops it up into pieces and incorporates a segment of the viral DNA into its own genome. As the bacteria experiences more threats from viruses, it accumulates a memory bank of past infections in a special part of its genetic code commonly known as CRISPRs, short for clustered regularly interspaced short palindromic repeats.

After this initial step, the bacteria then create special CRISPR-associated proteins that ultimately recognize and destroy the virus if it tries to invade again.

“If we take a bacterium and challenge it with a virus in the lab, overnight most of the bacteria will be killed, but there will be a few survivors that have found a piece of the virus and incorporated it into their own genome,” Michael Terns said. “And the resulting immunity is heritable, because when these survivors reproduce, all new cells exposed to the same virus will survive.”

The Terns lab is working to understand precisely how this process takes place in the bacterium Streptococcus thermophilus, which is commonly used by the dairy industry to make yogurt and cheese, and the archaeon Pyrococcus furiosus, used to make industrially important enzymes and chemicals and to increase heat tolerance in plants.

While this research holds great promise for industry, discoveries made in the Terns lab also illuminate previously unknown basic microbiological processes, opening the doors for new fields of exploration and new levels of understanding.

“Eventually, you are going to find the pathways that the people in our group are delineating in textbooks,” said Rebecca Terns. “It’s a rare opportunity in biology to be in the position to contribute to something this fundamental.”