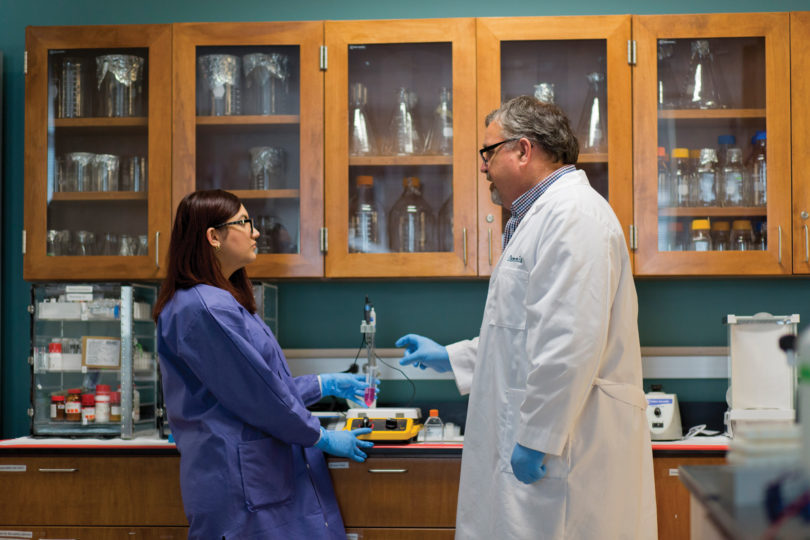 Center for Tropical and Emerging Global Diseases Director Dennis Kyle's lab currently focuses on malaria, one of the world's most prolific parasitic diseases, and the diseases caused by free-living amoebae. (Photo by Andrew Davis Tucker/UGA)

A UGA center takes on a public health problem that includes more than a dozen diseases of poverty.

Lymphatic filariasis. Schistosomiasis. Cryptosporidiosis. They’re some of the world’s most widespread parasitic diseases, but many people have never heard of them.

Those who live in Western nations are lucky—these diseases don’t really have to be on their radar. But for more than 2 billion people across the globe, the risk of contracting a disfiguring or potentially deadly parasitic disease is constant.

UGA’s Center for Tropical and Emerging Global Diseases (CTEGD) is aiming to change that. 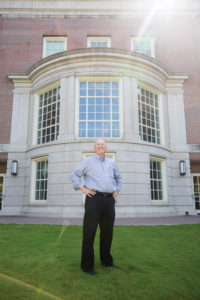 Rick Tarleton, founder of the Center for Tropical and Emerging Diseases, stands in front of the Coverdell Center where much of the center is housed. (Photo by Peter Frey/UGA)

Founded 20 years ago by Regents Professor of Cellular Biology Rick Tarleton, CTEGD consolidates UGA’s extensive, campus-wide tropical disease knowledge and drug discovery expertise into an interdisciplinary research unit that focuses on finding solutions for parasitic diseases. The center has garnered more than $135 million in research funding, and its 25 faculty, spanning eight departments across four colleges and schools, focus on more than a dozen diseases commonly associated with poverty.

“These diseases cause poverty. Poverty breeds unrest. Unrest breeds political difficulties,” says Daniel Colley, professor of microbiology and the center’s former director. “If you can provide people with good health, you can take away a tremendous amount of angst in people’s lives.”

But governments often don’t have the ability or the resources to fix the problem. And, while several pharmaceutical companies donate existing drugs for some neglected diseases, there’s little incentive for pharmaceutical companies to develop new treatments for many of them, says Kojo Mensa-Wilmot, head of the Department of Cellular Biology and CTEGD member. 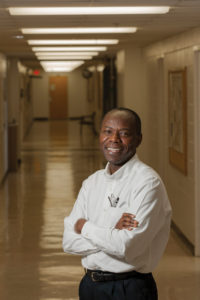 “If a large pharmaceutical company goes to its shareholders and tells them it’s going to invest $300 million to find a drug to treat a disease for people who have it but cannot pay for medication, no board member will vote for that project, and I cannot blame them,” he says. “That’s why we need people in academic institutions who are going to spend their time to try and help prevent or mitigate these very important global diseases.”

With infectious disease expert and cellular biologist Dennis Kyle now at the helm, the center’s diverse group of scientists, which includes entomologists, food safety researchers, geneticists, and more, are united in their commitment to vanquishing global diseases of poverty while training the next generation of scientists.

“It is a point of pride for UGA that we have this world-class assembly of scientists working on parasitic and neglected tropical diseases,” says David Lee, vice president for research. “Their work is so impressive and impactful because it is multidimensional, encompassing numerous disciplines from molecular and cellular biology to immunology and vaccinology, and extending from laboratory-based investigations to field work in Africa, South America, and elsewhere.”

For Kyle, Georgia Research Alliance Eminent Scholar in Antiparasitic Drug Discovery, the scope of the problem really hit home when he moved to Thailand in the early 1990s.

“I saw people suffering and dying of malaria,” Kyle says. “Most don’t realize how many people are affected by parasitic diseases like malaria, and the effort to try to eliminate those diseases is just not what it should be.”

People infected with malaria present with symptoms similar to many viral illnesses: fever, chills, and headaches. The difference is that, left untreated, malaria intensifies after the first 24 hours, ultimately leading to respiratory distress and multi-organ failure. There are more than 200 million clinical cases of malaria every year, with almost half a million people dying from the disease. Of those, three out of four are children.

“It sounds like a great decrease from the 2 to 3 million people who died annually from malaria in past decades, but it still means that basically one child under the age of 5 is dying every minute,” Kyle says. “We still have lot of people who are suffering, and we have to come up with better drugs to fight the disease.”

In partnership with the Bill & Melinda Gates Foundation and Medicines for Malaria Venture, Kyle developed a drug-testing device in his lab and is using it to test thousands of potential treatments in the hopes of finding the next wonder drug. But it’s an uphill battle, as the disease quickly grows resistant to the drugs intended to vanquish it.

“The malaria parasite has adapted to infect us, yet we have to fight it off somehow,” Kyle says. “Resistance is a big problem, and that’s one of the reasons we study it. We’ve identified new ways the parasite avoids the current drugs on the market, and we’re building on that knowledge to create better drug candidates going forward.” 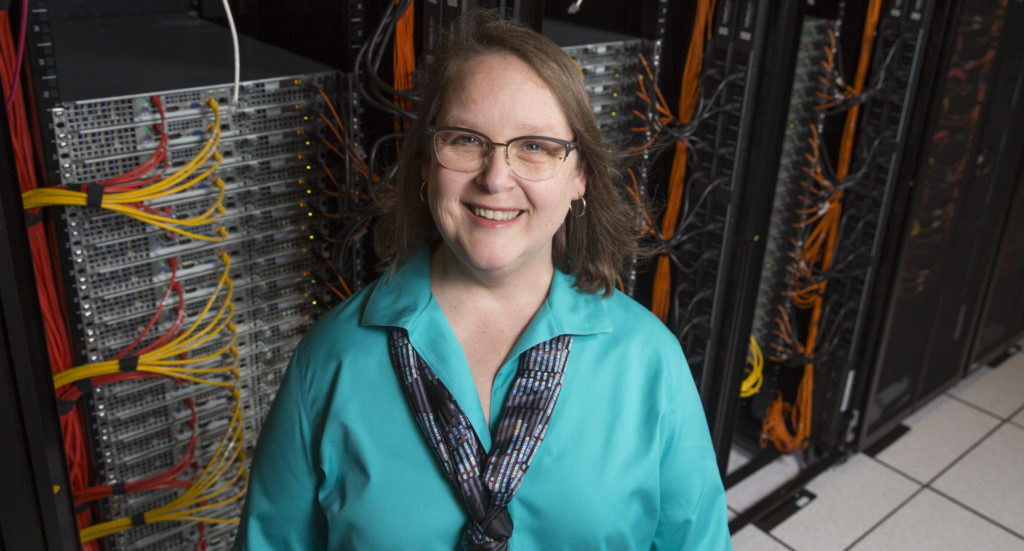 What’s going on at the University of Georgia? That’s the question Distinguished Research Professor of Genetics Jessica Kissinger hears at parasitic disease conferences across the nation.

“CTEGD put Georgia on the map for tropical disease research,” says Kissinger, who was one of the first faculty to be recruited by the center. “Researchers and graduate students want to come to Georgia because we have CTEGD.”

Kissinger is a principal investigator on a National Institutes of Health-funded project known as EuPathDB, short for Bioinformatics Resource Center for Eukaryotic Pathogens. The online resource consolidates genomic information from thousands of datasets on more than 280 disease-causing organisms, enabling researchers to look up others’ lab results to test hypotheses rather than having to do basic, preliminary experiments themselves. This saves both time and resources. The database, which attracts about 50,000 users per month from countries across the globe, has revolutionized how research on parasites is conducted.

“It’s taken for granted if you want to plan a trip that there are lots of online databases you can use, and within seconds, you can find flights from competing companies, what seats are free, and hotel and rental car information,” says Kissinger, director of UGA’s Institute of Bioinformatics. “They’ve made your life easier by linking together diverse things. Our EuPathDB database is basically the Expedia or Trivago for research on an important class of human pathogens.”

It wasn’t Briana Flaherty’s PhD ’15 first trip abroad when she went with Colley’s research group to Kenya. It wasn’t even her first trip to a developing nation. But it was the first time she spoke with people who had experienced firsthand the effects of living in areas where the threat of infection with any number of parasitic diseases was constant.

Tropical diseases are so prevalent in Kenya that it’s almost like the common cold.” — Briana Flaherty

A doctoral candidate in CTEGD member David Peterson’s malaria lab at the time, Flaherty worked with Colley’s team to explore the effects of worm-transmitted parasites on immune responses to standard vaccinations.

“Tropical diseases are so prevalent in Kenya that it’s almost like the common cold,” says Flaherty, now a postdoctoral fellow at the Centers for Disease Control and Prevention. “Everyone has had one, and everyone knows someone whose life has been taken by one. It’s why the work of CTEGD is so important.”

Colley’s work in Kenya is part of a larger global collaboration he founded almost 10 years ago called SCORE, short for Schistosomiasis Consortium for Operational Research and Evaluation. Funded by a grant from the Gates Foundation, SCORE’s mission is to control and eventually eliminate schistosomiasis, a disease caused by worms that leads to anemia and stunted growth and affects at least 240 million people. Another 700 million people are at risk of contracting the parasite, making schistosomiasis one of the major parasitic diseases in the world.

It’s not particularly deadly, at least not when compared to malaria, but the adult worms live inside people’s veins, laying eggs that ultimately embed and can cause severe damage to surrounding tissues.

“Schistosomiasis contributes to anemia, wasting, and stunting in childhood,” Colley says. “Tropical diseases like schistosomiasis keep children from going to school to learn. They keep people from getting good jobs.

“These are important diseases that are vastly understudied. CTEGD is turning that around.”

(This article originally appeared in the Spring 2018 issue of Georgia Magazine.)