A group of University of Georgia researchers led by geneticist Douglas Menke has become the first in the world to successfully produce a genetically modified reptile—specifically, four albino lizards—using the CRISPR-Cas9 gene-editing tool. The team’s results, which appeared online March 31, have been submitted for peer review.

“Reptiles are very understudied in terms of their reproductive biology and embryonic development,” said Menke, associate professor in the department of genetics. “There are no good methods to manipulate embryos like we can easily do with mammals, fish or amphibians. To our knowledge, no other lab in the world has produced a genetically altered reptile.”

Gene manipulation using CRISPR typically involves injecting gene-editing solutions into an animal’s newly fertilized egg or single-cell embryo, causing a mutation in the DNA that is reproduced in all subsequent cells. However female reptiles can store sperm in their oviducts for long periods, making it difficult to pinpoint the exact moment of fertilization. Also, the physiology of their fertilized eggs, which have pliable shells with no air space inside, presents challenges for manipulating embryos without damaging them.

Working with the species Anolis sagrei, commonly called the brown anole, Menke’s team overcame these challenges by microinjecting CRISPR proteins into multiple immature eggs, or oocytes, still located in the lizards’ ovaries. Targeting the tyrosinase gene, they successfully injected 146 oocytes from 21 lizards, then waited for the oocytes to be fertilized naturally. Within a few weeks, they realized their goal: four offspring displaying the telltale trait of albinism, which results when tyrosinase is inactivated.

“When I saw our first albino hatchling, it was truly awe inspiring,” said D.V.M./Ph.D. student Ashley Rasys, who was first author on the study. “I’m most excited about the possibility of expanding this approach into many other reptilian model systems, effectively opening the doorway for future functional studies.” 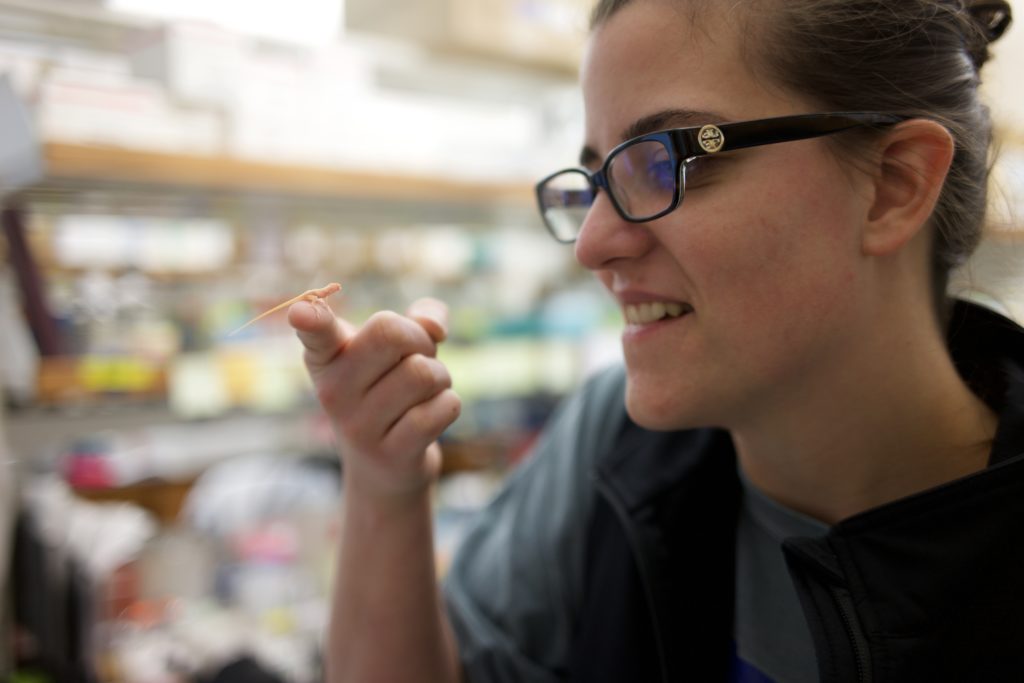 Ashley Rasys holds one of the lizards on her fingertip.

Menke, who typically studies mice, said he chose brown anoles because they essentially represent a reptilian counterpart to Darwin’s famous Galapagos finches—the lizards are spread throughout the islands of the Caribbean, with distinctive traits arising among each island’s relatively isolated population. Leg size, for example, is highly variable among different species of anoles, with ground-dwelling species possessing big and strong legs adapted to running and leaping, while their tree-dwelling cousins have smaller legs that are more agile for limb-hopping. The lizards for this study were all collected from the wild in an area near Orlando, Florida.

The ability to study the genes of brown anoles could also have implications for human genetics work. The tyrosinase gene is required for certain aspects of eye development shared between humans and anoles, but absent in the eyes of mice and other organisms commonly used for biomedical research. Researchers looking to explore ways to manipulate this gene for human ocular health did not have a suitable animal model—until now.

As an added bonus, Menke’s team noted that the mutant anoles not only displayed the manipulated tyrosinase in the gene copies inherited from their mother, but from the father as well. This means that the CRISPR reagent likely remained active in the mother’s oocytes much longer than anticipated and mutated the paternal genes post-fertilization.

“That was a surprise,” Menke said. “It enabled us to see the functional requirements of the gene without having to breed mutated animals to produce offspring who inherit the mutated gene from both parents. It’s a big time-saver.”

“This work could have far-reaching impact not only for the study of reptile genetics but also for the advancement of genomic medicine and application in humans,” said David Lee, UGA vice president for research. “I applaud Dr. Menke and his colleagues on this very significant achievement.”

Additional co-authors on the study include James Lauderdale, associate professor in the department of cellular biology; research staff members Sungdae Park and Rebecca Ball; and graduate student Aaron Alcala. The research was primarily supported by grants from the National Science Foundation’s Enabling Discovery through GEnomic Tools (EDGE) program and from the Society for Developmental Biology.