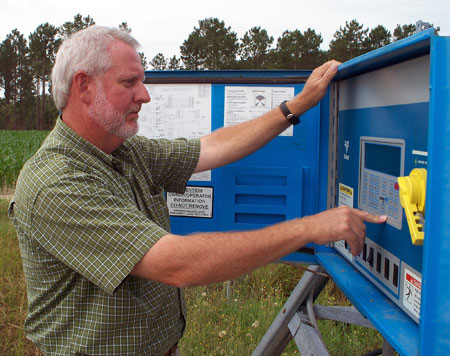 Athens, Ga. – A technology developed on the University of Georgia campus in Tifton that helps farmers improve yields and conserve water just got easier for farmers to use, says a UGA irrigation specialist.

Crops need water from rain or irrigation to grow properly. In Georgia the center pivot is commonly used for irrigation. The system of nozzles and pipes moves over fields in a 360-degree pattern. In southwest Georgia, the hub of irrigation use in the state, more than 6,000 center pivots are used to water crops such as peanuts, cotton and corn.

But farmers don’t have much control over how much water the irrigation nozzles spray as they pass over fields. Even small fields can vary widely in topography and soil types, with some places wetter or drier than other places in the same field.

Variable-rate irrigation takes all of this into consideration, says Calvin Perry, an agricultural engineer with the UGA College of Agricultural and Environmental Sciences who helped develop VRI. Researchers with the UGA National Environmentally Sound Production Agriculture Laboratory in Tifton introduced VRI to farmers in 2001. It became commercially available in 2004.

The concept is simple: Apply water when and where crops need it. Don’t apply it where they don’t. VRI technology uses computer maps, global positioning systems, soil sensors and software to control where and how much water the nozzles on a center pivot spray on crops.

This year, UGA worked with the VRI vendor to make the system easier for farmers to use. Instead of having to create computer maps of fields, the new VRI has a simple push-button feature. A farmer can start the center pivot over a field. When it gets to a location he doesn’t want to apply water, such as a wooded or wet area or a pond, the farmer pushes a button to train the system not to water that area. Once the system passes this area, he pushes the button again to resume watering only the crop. This can be done in as many as eight locations in the same field.

“A lot of growers want to irrigate more precisely but don’t have the time or comfort level with higher-tech gadgets,” Perry said. “We thought it’d be good to back up and simplify it a bit, eliminating some of the more time-consuming technology steps.”

UGA scientists have tested the water efficiency of VRI on farms in Georgia. It can reduce the water use in a field by as much as 15 percent annually without sacrificing crop yield.

A partnership with The Nature Conservancy, UGA and the Flint River Soil and Water Conservation District is working to bring down the cost for Flint River farmers in southwest Georgia by supplementing their contributions with a variety of grants and federal funding sources, including the USDA Natural Resources Conservation Service.

The hope is that future economies of scale will put the VRI system within reach of other farmers, Perry said.