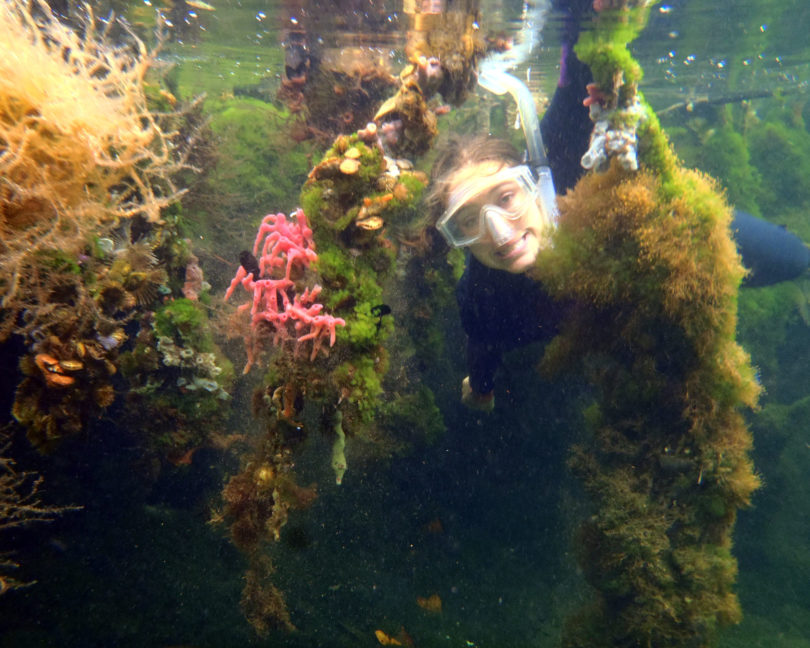 Athens, Ga. – Virginia Schutte, a doctoral student in the University of Georgia Odum School of Ecology, is a finalist in a video contest sponsored by the National Science Foundation. Her video, which takes viewers underwater to explore the root systems of tropical mangrove forests, is one of 14 to progress to the contest’s final round and is also in competition for the People’s Choice award.

Schutte’s research focuses on the underwater root systems of red mangrove forests in the Caribbean. Widespread throughout the tropics, mangrove forests provide important habitat for many terrestrial and marine animals, but they are being lost at nearly the same rate as rain forests and coral reefs, she said. Schutte’s exploration of the little-known workings of this underwater ecosystem could inform future mangrove protection, reforestation and management efforts.

“If a picture’s worth a thousand words, Virginia’s video is worth a million,” said Odum School Dean John Gittleman. “Undoubtedly, great video is a relatively new form of communicating and understanding science. For an observational science like ecology, new forms of communication are incredibly important. Virginia’s work is one of the best of this new approach-you’re seeing the future of ecology.”

The Creating the Future Video Contest was established to celebrate the 60th anniversary of the NSF’s Graduate Research Fellowship Program. The highly competitive program-fewer than 10 percent of applicants receive funding, according to the NSF’s website-was established in 1952 to encourage and promote the best scientific research taking place at U.S. educational institutions. Six Odum School students are NSF Graduate Research Fellows.

For the contest, students with current NSF Graduate Research Fellowships were invited to submit 90-second videos describing their research in fresh, clear and visually compelling ways. A panel of judges made up of scientists, engineers, educators and other NSF professionals scored the entries and selected the finalists. The final judging round will decide the first, second and third place winners, who will receive cash prizes of $2,000, $1,500 and $1,000 respectively. The winners will be announced Nov. 15.

The finalists also are eligible for the people’s choice award of $1,000, to be decided by online votes. Voting is open through Oct. 31 at midnight at https://grf2012.skild.com/skild2/grf2012/viewEntryVoting.action.