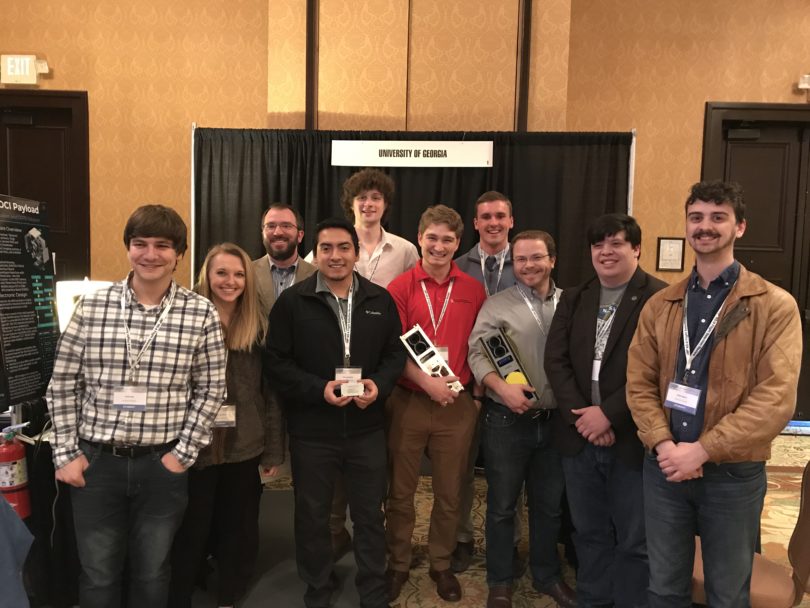 A University of Georgia research laboratory led by a group of undergraduate students is one of only two university research programs chosen by the United States Air Force to build and launch satellites into space.

The UGA Small Satellite Research Laboratory, which is supported by faculty from the Franklin College of Arts and Sciences and the College of Engineering, includes more than 45 members working to build two CubeSats for low Earth orbit.

CubeSats are a specialized class of miniaturized satellite that can be deployed more cheaply than larger spacecraft while still providing invaluable research data.

UGA’s winning satellite design is known as MOCI, short for Multi-view Onboard Computational Imager. This spacecraft is equipped with a camera that will capture images of Earth’s surface, which may be used to create 3-D models of structures on the Earth.

This mission is of great interest to the Air Force and the satellite community as a whole because of its on-board processing capabilities. This technology will allow for the current mission, as well as future missions, to process large amounts of data on board the spacecraft before sending a finished product back to Earth.

The competition is part of the U.S. Air Force’s Research Laboratory University Nanosatellite Program, or UNP.

The Flight Selection Review is the culmination of two years of work that multiple universities have been participating in over Phase A (design and development) of each university’s proposed spacecraft. Only the most promising designs and teams are selected to proceed to Phase B for integration and testing of the university’s spacecraft. UGA was one of the only two selected for the maturity of its design, the relevance of its mission to national needs, and the promise of its technology.

This is without a doubt one of the coolest projects happening on the UGA campus.” — Alan Dorsey, dean of the Franklin College of Arts and Sciences

“This review puts the University of Georgia on the map in regards to space systems and we are pushing for an even larger goal of getting a UGA made satellite to space,” said David Cotten, assistant research scientist and adviser on the project. “Not only did the students impress everyone with their communication abilities and their personalities but also with their skills and knowledge of the field. As a mentor, there is no greater feeling than seeing your students try their best all year and impress everyone with their results.”

The University of Colorado Boulder program was also selected. UC Boulder has numerous other satellites, has previously won a UNP competition, and the majority of its team is comprised of graduate students. While UGA is the first team to be selected on their first UNP iteration, its team consists entirely of undergraduate students except for one graduate student team member.

The UGA team is expected to have the satellite built and delivered to the Air Force Research Laboratory in two years.

“This is without a doubt one of the coolest projects happening on the UGA campus,” said Alan Dorsey, dean of the Franklin College of Arts and Sciences. “A student-led effort to design and build a satellite that will go into orbit is an extraordinary testament to the passion and commitment of our students. Their level of scientific creativity and intellectual engagement demonstrates a real zeal for the mission to go to space that reflects very highly on our college and the university.”