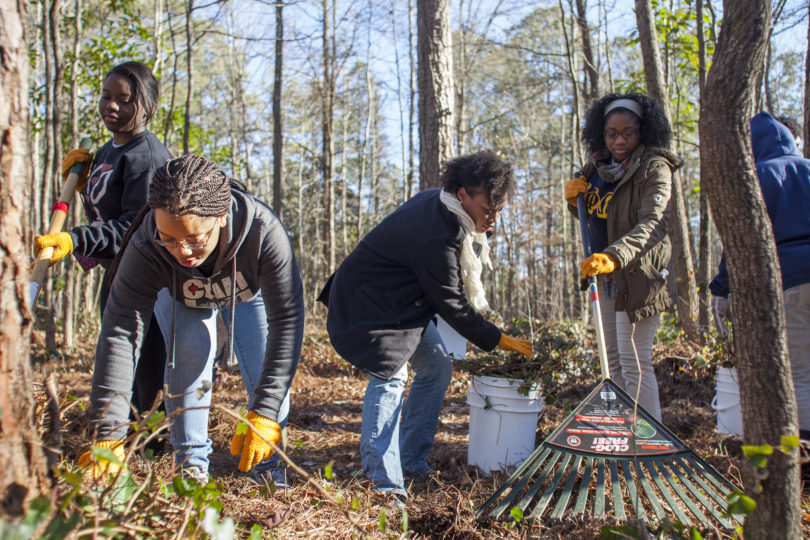 On the final morning of a three-day weekend, the urge might be to sleep in and relax.

Instead, hundreds of service-minded UGA students pulled themselves out of bed, bundled up in work clothes and ventured out into a winter day to volunteer for one of the 37 Martin Luther King Jr. Day of Service projects offered in Athens Jan. 20 through Hands-On Northeast Georgia.

Kebora Weir, a junior animal science major from Atlanta, along with other members of the Alpha Phi Omega co-ed service fraternity weathered a cold, windy morning outside to help clear gravesites at the Brooklyn Cemetery, a century-old African-American cemetery located behind Clarke Middle School. Parts of the old cemetery are in disarray with forest encroaching on tombstones and gravesites.

UGA student volunteers, as well as faculty, staff and Athens residents, helped clear the brush around graves-picking up limps, pulling up vines and making tombstones easier to see and identify. Others helped fill in holes where the earth over some graves is sinking.

“It’s a mixture of emotion because we’re working in a cemetery,” Weir said.

The Alpha Phi Omega group was working in an area containing the graves of several World War II veterans.

As the group worked through the morning, tombstones that were once surrounded by leaves, ivy and fallen limbs were easier to see and read.

The Alpha Phi Omega fraternity was one of many student organizations that participated in the MLK Day of Service. UGA’s Center for Leadership and the Office of Service-Learning coordinate volunteer efforts for students, faculty and staff with Hands-On Northeast Georgia for the MLK Service Day.

Dawn Aiello, director of community programs for Athens-based Community Connection, estimated that more than 1,000 volunteers participated in the day of service.

Linda Davis, chair of Friends for Brooklyn Cemetery, the organization that preserves the cemetery, said the Martin Luther King Jr. Day of Service draws the largest number of volunteers to clean up the cemetery.

By the time they finish, there is a noticeable difference in the old cemetery.

“That’s the beauty of MLK Day,” said Davis, whose grandparents are buried in Brooklyn Cemetery. “I love walking through here in February.”