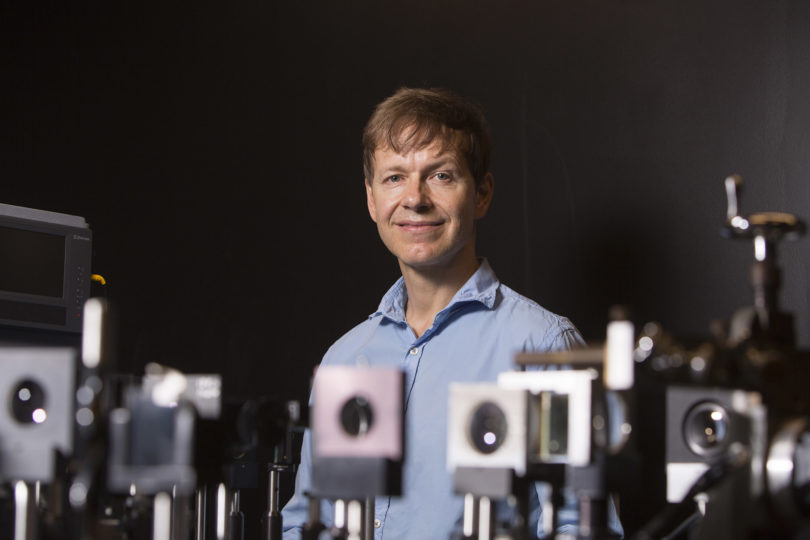 Billy Hammond is a UGA professor of brain and behavioral sciences and director of the Vision Sciences Laboratory.

A new study from a UGA researcher supports the notion that eating more vegetables may help maintain a person’s vision.

“People say that the eyes are the window to the soul,” said Billy Hammond, a UGA professor of brain and behavioral sciences and director of the Vision Sciences Laboratory. “I don’t know about that, but they are certainly a window to a person’s health.”

Human eyes naturally contain yellow pigment in the macula, a spot near the center of the retina responsible for high-resolution vision. Those with more yellow in their macula may have an advantage when it comes to filtering out haze, which are atmospheric particles that obscure one’s vision. According to the study, eyes with increased yellow in their macula could absorb more light and maintain better vision in haze than others.

Macular pigment in the eye depends on a person’s diet. The macular pigments, known as lutein and zeaxanthin, most commonly are found in leafy, green vegetables.

Hammond conducted the study, which was published in the September issue of Optometry and Vision Science. He explored how yellow light in increased macular pigment helps filter out shortwave light called blue haze, which is damaging to retinal tissue.

To test the visibility hypothesis, Hammond combined the subjects’ contrast sensitivity function-or their ability to identify objects that may not be outlined clearly in a static image-with simulated blue haze and short wave-deficient light. Using xenon light and a glass filter, Hammond replicated atmospheric haze. He then asked subjects to maintain focus on a target. He found that subjects with increased macular pigment were able to absorb more light before losing track of the target.

“We’ve found that the yellow filters out the effects of blue haze,” Hammond said. “The pigment affects how far people can see outdoors and how they can adapt to their environment.”

A faculty member in the Franklin College of Arts and Sciences’ psychology department, Hammond runs UGA’s Vision Sciences Laboratory, which researches all aspects of the human visual system. In the laboratory, Hammond works with graduate and undergraduate students to explore visual processing as it applies to the brain.

Hammond and his students primarily focus on how dietary and exercise habits affect vision. Lifestyle has the potential to influence degenerative disease and the functions of the central nervous system. He hopes that the laboratory’s research will influence how people view the relationship between health and vision.

“From an evolutionary standpoint, we lead profoundly unnatural lives,” he said. “If we work toward incorporating a balanced diet and exercise in our daily routines, we will see long-term effects on our visual and neurological health.”

Additional authors on the study include Laura M. Fletcher, a graduate student in the behavioral and brain sciences program, and Michael Engles, a postdoctoral researcher in the UGA Vision Sciences Laboratory.