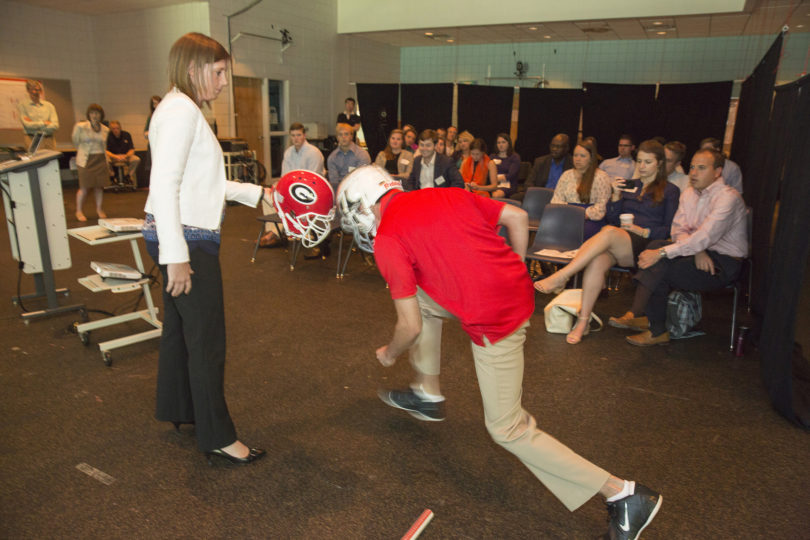 An analysis of game videos by Julianne Schmidt

In football, player-on-player hits will likely cause more severe head impacts than other impacts, according to a new study by a UGA researcher.

The study, published in the most recent issue of the journal Pediatrics, analyzed nearly 7,000 head impacts during 13 games in a high school football team’s season and post-season. Julianne Schmidt, an assistant professor in the UGA College of Education and author of the article, said the analysis of game videos found players sustained more serious head impacts when hitting another player than players who hit their heads on another object, such as the ground.

Schmidt said that this supports recent guidelines that encourage players to “take their heads out of the game,” or avoid leading with their heads when hitting another player.

Another aspect of the research could lead to additional guidelines or rule changes related to the traditional football “three-point stance,” or the crouched position players use at the start of each play.

Schmidt said the distance players ran before impact, as well as their starting stance, also affected the severity of their head impact. Players who ran more than 10 yards before impact had much more severe head injuries than those who traveled just a few feet, which is similar to earlier findings in studies of college football players. These studies resulted in a change to the kickoff line, moving it from the 30- to the 35-yard-line to reduce the distance players ran.

But players who started running in the traditional three-point stance, and ran a long distance before impact, were even more likely to sustain a more severe head impact.

“When you combine a three-point stance with running a long distance, it results in the most severe head impacts,” said Schmidt, who studies concussions in the college’s kinesiology department. “So that points toward a need for rule changes that emphasize the combination of the two if we’re going to reduce head impact severity.”

It’s common for football players to sustain several head impacts per game, Schmidt said, although a relationship between head impact and concussion risk is not well understood. Still, preventing head impacts and reducing head impact severity is thought to make the game safer.

Because the study focused on high school players, who have a tendency to change positions throughout their time on a team, she suggested coaches and administrators emphasize good tackling techniques by teaching proper head and body positioning. Rule changes related to positions that combine starting in the three-point stance and running long distances should also be considered, according to Schmidt.

“High school football players who start in a three-point stance do not typically run a long distance before collision, but some position types, like tight ends and defensive ends, might be more likely to combine the two,” she said.