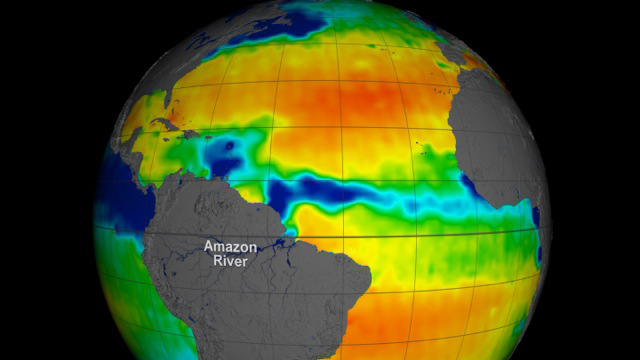 This image shows surface salinity in 2011 as measured by the NASA Aquarius satellite. The orange colors indicate higher salinity and blue colors lower salinity. The blue extension coming off of Brazil toward Africa is the plume. (Credit: NASA)

Athens, Ga. – The Amazon River, the largest in the world in terms of discharge of water, transfers a plume of nutrients and organisms into the ocean that creates a hotspot of microbial activity affecting many global processes, including the storage of atmospheric carbon.

In a new study, scientists at the University of Georgia have revealed in greater detail the microbial activity in the Amazon River Plume as part of a broad project to understand the global carbon budget and its possible impacts in a changing ocean.

The study, “Microspatial gene expression patterns in the Amazon River Plume,” was published July 14 in the online edition of the Proceedings of the National Academy of Sciences.

“By collecting data from genes and gene transcripts in the water samples, taking billions of sequences of DNA and RNA from organisms at various places in the plume, we were able to construct the most detailed look that’s ever been put together of the microbial processes in a drop of seawater,” said Mary Ann Moran, Distinguished Research Professor of Marine Sciences at UGA.

UGA researchers from the Franklin College of Arts and Sciences departments of marine sciences and microbiology took samples from the plume 300 miles off shore from the Amazon River mouth, then isolated the genes of organisms using the nutrients, nitrogen, phosphorus and carbon being carried into the ocean by the river plume.

Discharge from the plume, more than 200,000 cubic meters of fresh water per second, delivers nitrogen and phosphorus to microscopic phytoplankton that live in the upper sunlit layers of the ocean. Via photosynthesis, phytoplankton capture carbon dioxide that dissolves into the ocean from the atmosphere, a mechanism that captures a larger proportion of CO2 than is consumed by the world’s rainforests.

Until now, quantitative data about the microbial activity underlying this mechanism has been elusive.

Data in the paper will used be as part of a larger model of the Amazon and will be available to researchers around the world.

“The scientific community as a whole can draw new conclusions or study different aspects from the data sets,” said Brandon Satinsky, a doctoral student in microbiology at UGA and lead author on the study. “It’s such a large amount of water and material, and the location of the plume moves over the course of the year, from the Caribbean virtually over to Africa.”

“It’s first time we’ve had this kind of data, at this level of detail, and so now we can share with teams of modelers to help them make better predictions about the future of the system,” Moran said.

The project is part of two major UGA research initiatives: ROCA, the River Continuum of the Amazon; and ANACONDAS, Amazon iNfluence on the Atlantic: CarbOn export from Nitrogen fixation by DiAtom Symbioses, both of which are led by associate professor of marine sciences Patricia Yager. The initiatives are supported by the Gordon and Betty Moore Foundation through grant GBMF2293 and the National Science Foundation.

For more on UGA research in the Amazon, see http://amazoncontinuum.org/.