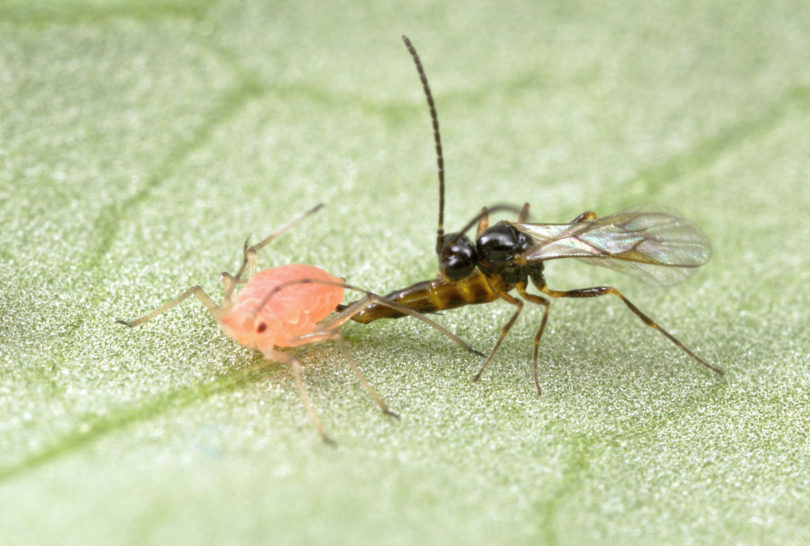 A parasatoid wasp lays an egg in a pea aphid. Photo by Alex Wild.

Athens, Ga. – Nature is a system of checks and balances, as is the case between aphids and wasps. Aphids feed on plants; wasps lay eggs inside aphids, killing them and increasing plant production. Some aphids harbor bacterial symbionts, or smaller organisms that live in close association with a host, that provide protection by killing the internally developing wasps. Wasps are able to decipher which aphids are infected and use superparasitism to override the poison.

A team of researchers led by University of Georgia entomologist Kerry Oliver discovered the latest in the series of natural controls regulating the insect world.

UGA researchers, in collaboration with scientists at the University of Arizona and Akita Prefectural University in Japan, looked at behavioral adaptations that the parasitoid wasp, Aphidius ervi, uses to counteract the symbiont defense of the pea aphid, Acyrthosiphon pisum. Researchers found that when an aphid host was infected with a protective bacterial symbiont, the wasps laid two eggs instead of one in each aphid to increase survival rates of their offspring. Results of the study were published Feb. 24 in BioMed Central’s open access journal BMC Biology.

“This is incredibly fascinating natural history,” Oliver said. “The advent of molecular technology allows us to study these really complex species interactions. We are gaining a much greater appreciation for microbial organisms and their roles in mediating interactions between larger multicellular creatures, such as insects.”

Pea aphids are agricultural pests that feed on peas and alfalfa. They do their damage by extracting sap from the terminal leaves of their hosts, causing plant deformation, wilting and death. Aphids are thought to have been accidentally introduced to North America from Europe sometime in the 1870s. The parasitoid wasp, A. ervi, was subsequently introduced to help control this aphid.

A female wasp normally lays a single egg inside an aphid. The egg hatches and the resulting larva develops for about one week before killing the aphid. If the aphid is infected with the bacterial symbiont, Hamiltonella defensa, however, the larva doesn’t develop normally.

“Most insect species are infected with bacterial symbionts. They provide diverse benefits to their insect hosts, including nutrition for those feeding on poor quality diets and defense for those attacked by natural enemies,” Oliver said. “These symbionts are passed on through generations-just like genes-from mother to offspring.”

Pea aphids are capable of clonal reproduction, and Oliver used this feature to create experimental lines that share the aphid genotype but are different with respect to symbiont infection.

“There is increasing awareness that many insects are infected with protective symbionts, but little is known about the strategies being used by natural enemies to counter these symbiont-based defenses,” he said. “We find A. ervi can discriminate between infected and uninfected aphids and selectively superparasitize infected aphids, while laying single eggs in uninfected hosts, indicating A. ervi has likely evolved successful strategies to counter symbiont-based defenses employed by pea aphids.”

To figure out which aphids are infected with the bacteria and which are not, Oliver said the wasps may be sniffing for an aphid alarm pheromone.

“They have a pheromone alarm telling all of their sister clonemates to run away when they are attacked,” he said. “But it’s possible that the aphids with bacterial protection don’t send out this message at the same level because their risk of death is reduced and there is a risk associated with dropping from the plant. The wasps, however, may have co-opted this signal for their own benefit.”