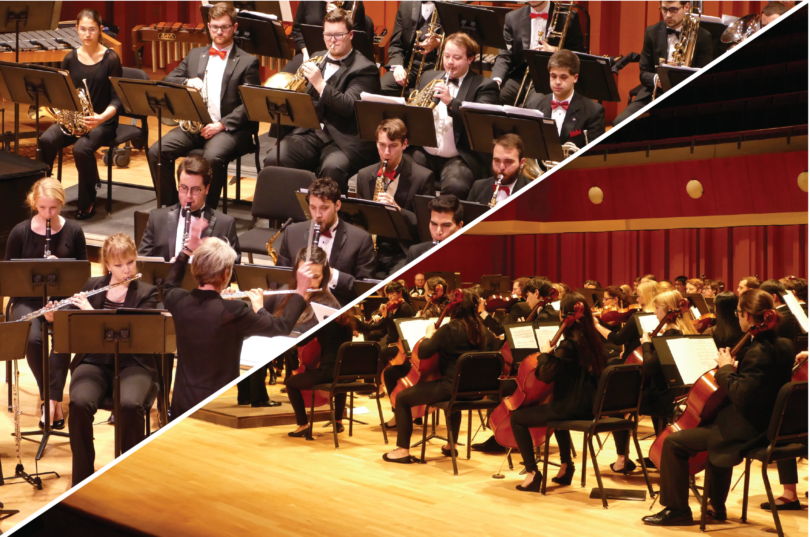 The University of Georgia Symphony Orchestra and the Hodgson Wind Ensemble join forces for a combined concert on Sept. 27 at 7:30 p.m. in Hodgson Concert Hall.

When two of the Hugh Hodgson School of Music’s premier large ensembles join forces, it is sure to be an evening to remember. The Hodgson Wind Ensemble and the UGA Symphony Orchestra will take the Hodgson Concert Hall stage Sept. 27 at 7:30 p.m.

“This is only the second time in my 25 years that the orchestra and the wind ensemble have been on the same concert,” said Mark Cedel, director and conductor of the UGASO. “We look forward to sharing our music and our audiences.”

The Hodgson Wind Ensemble will begin the evening with a welcome fanfare in the lobby of the Performing Arts Center. Under the baton of Director of Bands Cynthia Johnston Turner, the HWE will open with a piece called “Curtain Raiser” by Peter Boyer. The major piece of the first half is Michael Colgrass’ “Winds of Nagual: A Musical Fable on the Writing of Carlos Castaneda.” Colgrass won the Pulitzer Prize in composition in 1977. “Winds of Nagual” is highly programmatic, meaning the audience will hear all of the adventures (and misadventures) of Carlos as he experiments with the story of Don Juan. They will conclude the first half with Sousa’s “Esprit de Corps” to celebrate the collaboration with the UGA Symphony Orchestra. The audience also will be introduced to two new graduate conductors during the first part of the concert.

After intermission, the UGASO will perform Tchaikovsky’s Sixth Symphony, his “Pathetique,” which is a work with soaring melodies, lively and brilliant sections, and moments of great tragedy.

“It really takes the listener through quite an experience,” Cedel said. It is historically known that Tchaikovsky believed this symphony to be “the best thing he ever composed.”

Both Johnston Turner and Cedel said that they are looking forward to sharing their music and their audiences. Tickets for the concert are $12 for adults and $6 for students and children. They can be purchased online at pac.uga.edu, by calling 706-542-4400 or at the PAC box office. Those unable to attend can watch the concert live on the Hodgson School’s website at music.uga.edu/live-streaming.