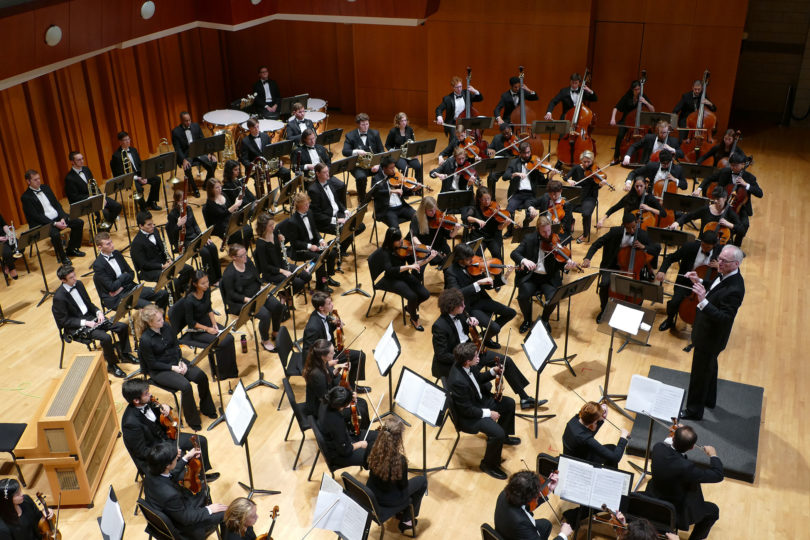 The UGA Symphony Orchestra performs its penultimate concert of the year March 30.

The UGA Symphony Orchestra performs its penultimate concert of the year March 30 at 8 p.m. in Hodgson Concert Hall.

Under the batons of Mark Cedel, director of the orchestra, and Claudine Gamache, D.M.A. conducting student, the UGASO will perform works from Brahms, Karl Goldmark and Stravinsky.

The program opens with Goldmark’s “Im Fruhling,” which translates to “In the Spring,” something of an appropriate selection, considering the date of the concert.

Goldmark’s most popular overture, “In the Spring,” is less about telling a story than it is about conveying a feeling likely well known to Goldmark and other Austrian natives who endure harsh mountain winters: the joy of the dawning of spring.

Stravinsky’s ballet “Le baiser de la fee,” or “The Fairy’s Kiss,” the Divertimento of which is the second work on the program, came together through no small amount of serendipity in 1927.

Ida Rubenstein commissioned a work from Stravinsky and expressed a desire to have something composed that was inspired by Tchaikovky’s music.

The four-movement Divertimento was arranged by Stravinsky and Samuel Dushkin in 1934, six years after the premiere of the ballet, and revised in 1949.

The final piece of the program, Brahms’ Symphony No. 4, also owes a debt to music from its past. Using styles and techniques originating long before the symphony’s 1885 completion, Brahms made his final symphony reflect the music he admired from his past, while still including several modern twists on convention.

The Brahms symphony will be conducted by Gamache, as part of her final D.M.A. recital.

Tickets to the concert are $12 each or $6 with a UGA student ID and can be purchased at pac.uga.edu or the PAC box office. Those unable to attend can watch the concert live on the Hodgson School’s website at music.uga.edu/streaming.