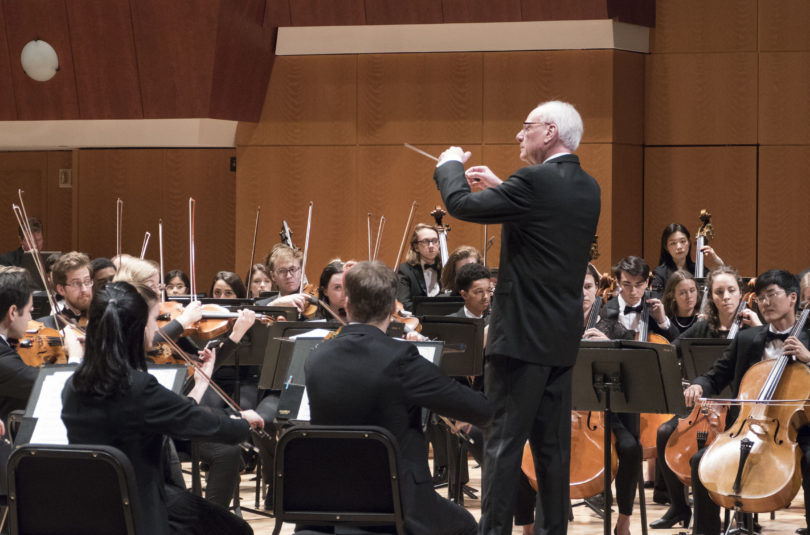 The UGA Symphony Orchestra’s next performance will be at 7:30 p.m. on Feb. 28 in Hodgson Hall.

Join the Hugh Hodgson School of Music UGA Symphony Orchestra for a Friday night concert of two of music’s most celebrated symphonists, Ludwig von Beethoven and Gustav Mahler in Hodgson Hall on Feb. 28.

The orchestra will be taking on both Beethoven’s and Mahler’s first symphonies; “Symphony No. 1 in C major, Op. 21” by Beethoven and “Symphony No.1 in D Major, Titan” by Mahler.

“Beethoven’s first carries on the tradition of his predecessors before he goes on his own way. Mahler, on the other hand, revolutionized the form from the very beginning, creating his own, very unique sound,” said Mark Cedel, director of orchestral activities.

The last time the UGASO performed Beethoven’s first was November 1995 for the dedication and opening concert of Hodgson Concert Hall. The symphony premiered in Vienna in 1800, which marked a change in music of the time, as Beethoven began adding his own unique style on the classical styles. The innovations in this work are evident from the harmonic suspense of the opening, to the energetic theme of the first and a contrasting lyrical second theme, which features the woodwinds more prominently. The UGASO will be performing works of Beethoven in many upcoming performances to celebrate 250 years of Beethoven.

Mahler’s “Titan” symphony follows the arc of the hero’s journey, which ultimately ends in victory as the symphony ends with an epic chorale theme.

“Composing is like building blocks, where new buildings are created again and again, using the same blocks. Indeed, these blocks have been there, ready to be used, since childhood, the only time that is designed for gathering,” the composer said. The Mahler symphony will be the final recital requirement for Jean Gómez, the orchestra’s assistant conductor and DMA candidate.