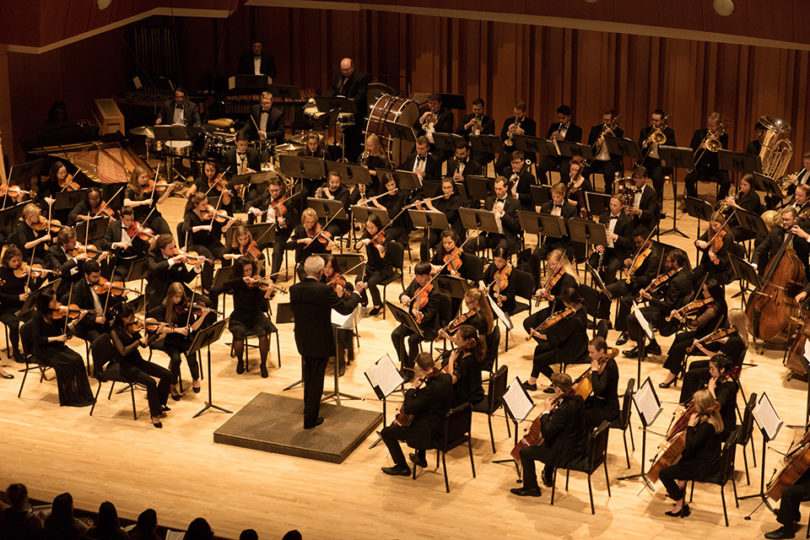 The Hugh Hodgson School of Music’s next Ensemble Series performance will feature the University of Georgia Symphony Orchestra.

The Hugh Hodgson School of Music’s Ensemble Series continues on Sept. 26 at 7:30 p.m. with a concert by the University of Georgia Symphony Orchestra in Hodgson Hall.

The first part of the concert features favorite works of two American composers.  To open the concert, Jaclyn Hartenberger, associate director of bands, will be the guest conductor for Samuel Barber’s hauntingly beautiful Adagio for Strings.

Next, assistant conductor Jean Gómez will lead the orchestra in a performance of Aaron Copland’s Appalachian Spring Suite. Dancer and choreographer Martha Graham commissioned the piece, which premiered as a ballet in 1944. It was originally composed for 13 instruments because of the limited seating available to musicians at the Library of Congress. In 1945, Copland made a suite for a full orchestra, preserving the essential features of the original music. “Suite from Appalachian Spring, Ballet for Martha” has eight sections that have descriptions by the composer, such as, “Introduction of the characters, one by one, in a suffused light…a sentiment both elated and religious gives the keynote…extremes of joy and fear and wonder…muted strings intone a hushed prayer-like chorale passage.”

After the intermission, audiences will hear a piece by Antonín Dvorák.

“He was one of the great nationalistic composers of the Romantic period, and his Symphony No. 7 is a shining example,” said Cedel.

The Czech composer employs rhythms and folk aspects of Moravia and his native Bohemia. He had the support of Johannes Brahms, who helped him to publish his music, which launched his international reputation. Upon his first visit to London in 1884, his music already was very well known. The London Philharmonic Society elected him as honorary member and commissioned a series of concerts in London. In response, Dvorák composed his Symphony No. 7, which premiered on April 22, 1885, at St. James’s Hall in London.

Tickets for the performance are $12 for adults and $3 for students and children and are available through the Performing Arts Center. They can be purchased online at pac.uga.edu, by calling 706-542-4400 or in person at the box office. The Ensemble Series includes concerts by the Hodgson School’s premiere large ensembles, with all proceeds from ticket sales directly benefiting its students.

For those unable to attend, live streaming will be available at music.uga.edu/live-streaming.