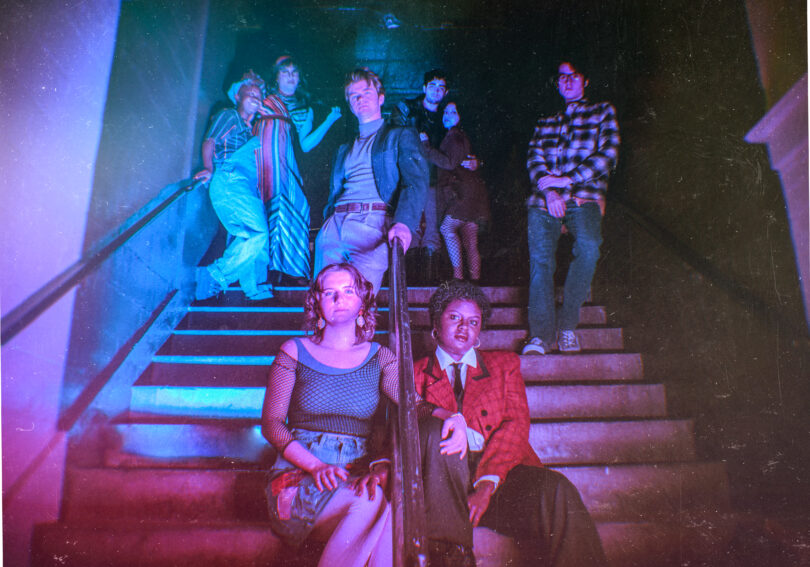 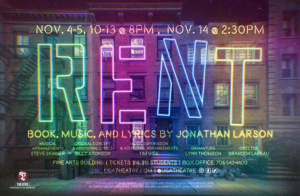 This production is part of the University of Georgia’s Spotlight on the Arts festival.

Larson’s Pulitzer Prize-winning musical comes to the Fine Arts stage for the first time. “Rent” follows a group of poor artists during an unforgettable year as they struggle with their careers, relationships and the pervading reality of the HIV/AIDS epidemic and its impact on their community.

Throughout its history, the defiantly diverse “Rent” has depicted the perseverance of the artistic spirit against seemingly insurmountable challenges—representing both a specific moment in time as well as a universal message of love that remains as relevant as ever.

“With this year being the 25th anniversary of ‘Rent,’ the timing is perfect for approaching the play for new audiences,” said LaReau, a third-year Ph.D. student in the department of theatre and film studies. “Having the freedom to play and explore has given us opportunities for incorporating media in a way that it’s never been used in ‘Rent’ before. And that gives me the opportunity to try new things onstage that make this production thrilling and exciting for both hardcore ‘RENTheads’ and new fans alike.”

Caroline Caden, a fourth-year theatre major, plays the infamous Maureen, a queer performance artist who she finds refreshingly relatable to her own life experience. “It’s really nice to be able to play a character that shares multiple identities with you,” said Caden. “Being able to channel my queerness on stage is an opportunity unlike any other.”

George Contini, a professor in the theatre and film studies department who is currently teaching a course in the history of musical theatre in America, notes that “there is a direct creative line from the rebellious ritual of ‘Hair’ in the ’60s, the empowered celebration of sexuality and gender of ‘Rent’ in the 90’s, and the exploration of race and power in ‘Hamilton’ in the early 21st century. All three of these great musicals represented times when alternative voices and stories were displayed as being vital to the American narrative.”