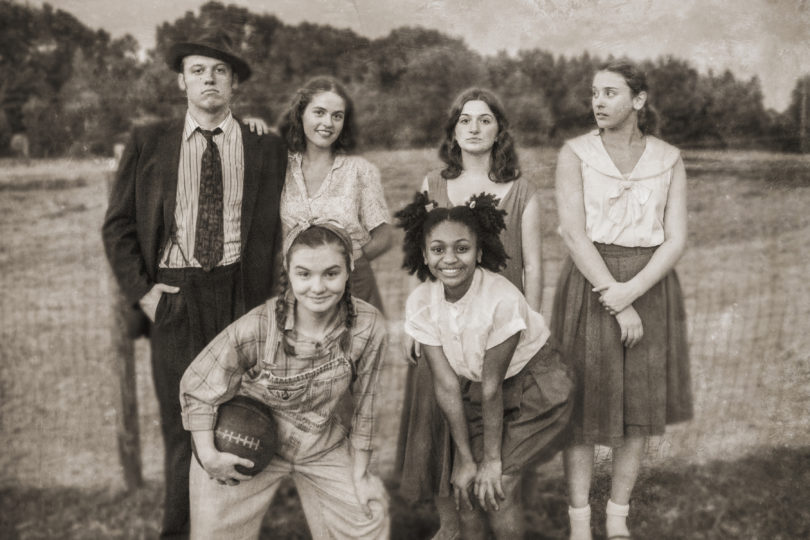 UGA Theatre begins its season with a production of Meg Miroshnik’s The Tall Girls.

Set in the fictional Midwestern town of Poor Prairie, The Tall Girls tells the story of a Depression-era girls’ basketball team cobbled together by a mysterious man with a murky past. The girls of Poor Prairie have their sights set beyond the scorched horizon of their meager little town, and basketball serves as a welcome relief to the harsh realities of their Dust Bowl existence. The girls struggle to escape the perception that their love of basketball is little more than a novelty.

Pieri, who graduated from UGA with her MFA in acting in May 2018, brings a personal connection to the production.

“When I read The Tall Girls, I was reminded of my time as a center, grabbing a rebound off the backboard and immediately taking a defensive stance,” said Pieri, who also grew up in a setting not too far removed from the events that inspired the playwright’s work. “Miroshnik’s grandfather actually coached an undefeated girls’ basketball team in the 1930s 10 minutes from where I grew up.”

In a production centered around basketball, Pieri felt it was crucial for the actresses to display their athletic prowess during the audition process.

“I wanted the girls to have a sense of confidence when they handle the ball, which serves two functions,” Pieri said. “The first is that it conveys realism while you’re watching the show, and the second is the audience doesn’t have to worry that an errant basketball is going to fly into the crowd at any point.”

Scenic and lighting designer Melanie Stevens similarly grew up with a love for basketball. She took inspiration for her designs from the contrast between the girls’ harsh realities and their ambitious aspirations.

“These girls feel liberated when they’re playing basketball and all of the troubles associated with their everyday lives seem to fade away,” she said. “I wanted to juxtapose that sense of levity against the stark circumstances in which they live.”

The Tall Girls premiered in 2014 at the Alliance Theatre in Atlanta and David Saltz, head of the theatre and film studies department in the Franklin College of Arts and Sciences, is excited to bring Miroshnik’s show back to Georgia.

“Many of our alumni are making a splash in the Atlanta theatre scene, so it’s exhilarating to see our current students putting on a show that was born on Atlanta stages,” he said.