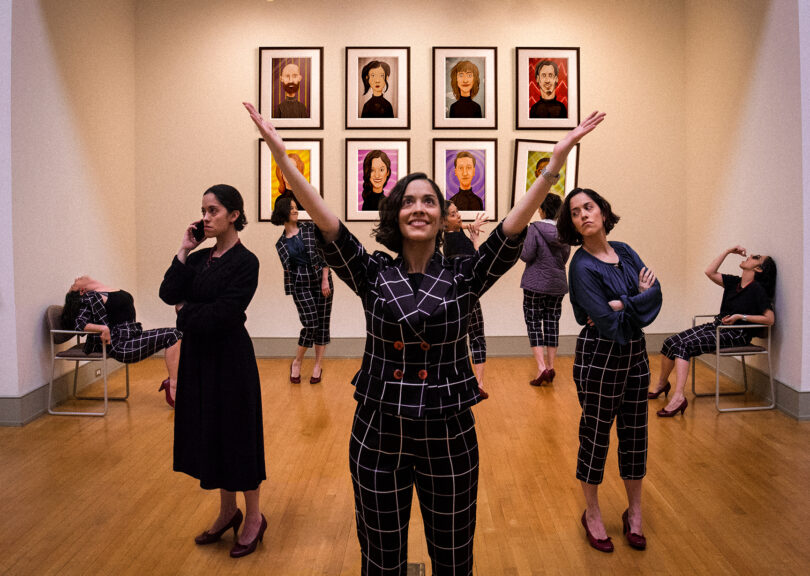 Crozier’s sharp caricature of cutthroat office politics follows a young job applicant as they vie for a position at an art museum, facing a gauntlet of eccentric potential co-workers along the way. UGA Theatre’s production has an unusual twist right at the outset, allowing audiences to choose which actor will take on which role that night as they walk into the theatre.

“The audience picks what roles the actors play, therefore the audience becomes culpable in the issues that arise from their decisions,” said Kundert. “The play approaches this with a sense of humor so it is easier for audiences to learn and grow from it.”

Another unique aspect of “Eat the Runt” involves the collaboration between UGA Theatre and the Lamar Dodd School of Art.

“The set is being dressed with the help of MFA curator Jason Rafferty, currently conducting an art call from the graduate and upper-level undergraduate art students,” said Jordyn Seever, scenic and costume designer. “The art pieces will be set up to allow the audience to tour the set prior to beginning of the show, complete with the artist statements.”

COVID-19 continues to be a concern for UGA Theatre productions and maintaining a safe performance space for all involved is high priority. Similar precautions to the ones taken during the season’s first two productions will be followed to ensure the safety of both the cast and the audience. The Cellar Theatre, typically a 100-seat black box venue, will have its first row partitioned off in an attempt to provide further separation between the actors and audience.

“It feels tremendous yet cautiously hesitant to be performing again,” said MFA actor Julian Borris on how the cast feels to be working in the theatre again. “We are all raw and vulnerable right now and I’m looking forward to pursuing that vulnerability.” For undergrad cast member Evan King, the unpredictability of Crozier’s comedy will provide “a brief escape from reality. Theatre is the perfect medium for that.”