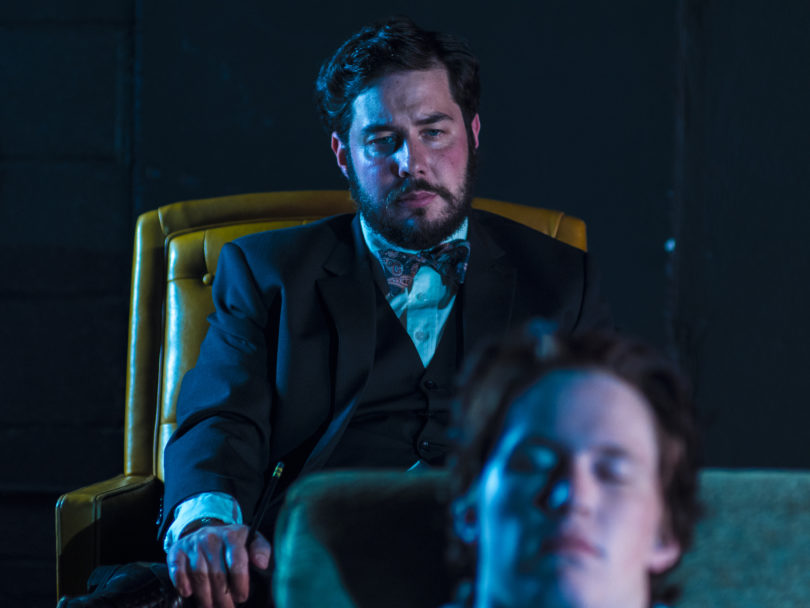 UGA Theatre’s production of Equus is part the annual Spotlight on the Arts festival.

Tickets are $16 or $12 for UGA students. Tickets can be purchased online at www.ugatheatre.com/equus, via phone at 706-542-4400 or in person at the Performing Arts Center or Tate Center box offices.

Equus tells the story of Alan Strang, a 17-year-old boy charged with violently blinding six horses in a seemingly unprovoked fit of rage. Strang is submitted to an extended psychiatric evaluation at the hands of Martin Dysart in an effort to discover why a well-adjusted young man would commit such an abhorrent act of violence. Through their sessions, Dysart grows increasingly envious of the passion that drove Strang to his horrific act and develops deep misgivings about the cost of his soul-deadening “cure.”

Equus was based in part on a news story encountered by Shaffer that involved a boy blinding multiple horses near Suffolk in England. Shaffer used this real-life incident as a springboard to explore what director Ray Paolino refers to as the “ritualistic roots” of theater. Equus holds a unique sentimentality for Paolino, who saw the play on Broadway in 1974 as a young man.

“Shaffer created a world of limitless possibilities on stage. Equus poses ancient, yet essential, questions that we all face: What is our purpose? Can we ever know another person? Is there a god?” said Paolino. “I believe these questions are the reason this show has remained relevant for so long.”

With an ethereal narrative that juxtaposes reality with memory, the action of the play is somewhat dream-like—a quality that informs UGA Theatre’s production in all of its various design elements.

For costume designer Kelsey Albright, the show’s journey through the minds of its characters lends itself to an expressionistic design.

“Equus pulls the audience out of the real world and into Dysart’s troubled mind and reflects his interpretation of events, which are more like heightened memories than reliable accounts of the play’s narrative,” said Albright.

Sound designer John Gibbs sees the dichotomy of repression and passion as equally vital to Equus, especially with respect to the role religion plays in the show.

“Whereas codified religions (in this case, the traditional Church of England) represent a repressive presence, a more primitive spirituality, filled with pain and suffering but alive to intense feeling, is trying to burst through,” said Gibbs.

UGA Theatre’s production of Equus is a featured event of the University of Georgia’s Spotlight on the Arts, a festival highlighting the work of students and faculty involved in the arts at UGA.

“Equus is the perfect vehicle to showcase the department of theatre and film studies during the Spotlight event,” said David Saltz,  head of the theatre and film studies department. “It’s a towering work of unbridled theatricality that is psychologically astute, philosophically penetrating and physically demanding. It’s one of the most ambitious plays of the modern era, and I think our production lives up to that ambition in direction, acting and design without question.”