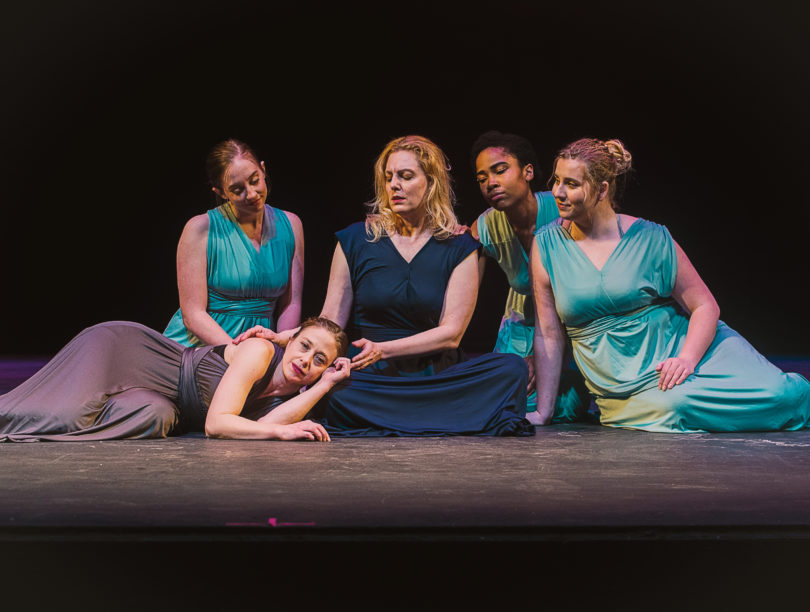 Editor’s note: Because of the suspension of in-class instruction and to keep our community safe from COVID-19, this event has been canceled.

UGA Theatre presents The Penelopiad by Margaret Atwood, directed by guest artist Eliana Marianes, March 17-21 at 8 p.m. and March 21-22 at 2:30 p.m. in the Cellar Theatre of the Fine Arts Building at 225 Baldwin Street.

Tickets are $12 and $7 for UGA students and can be purchased online at ugatheatre.com/penelopiad, via phone at 706-542-4400 or in person at the Performing Arts Center.

Atwood (The Handmaid’s Tale) provides a contemporary take on Homer’s The Odyssey, focusing on the faithful Penelope and her struggles to maintain the kingdom of Ithaca, raise her son and thwart innumerable suitors in her husband’s absence. Upon his return to Ithaca, Odysseus lays waste to not only the suitors but 12 maids tasked with helping Penelope delay the suitors’ advances. Atwood’s retelling examines complicity in the face of injustice and demonstrates how changing perspectives can radically transform a story’s meaning.

“My directorial work has focused in large part on uncovering the central question of this play,” said Marianes. “One of the biggest challenges I faced stems from the fact that there are technically two protagonists in the play (Penelope and the chorus of Maids), who often seem to ask opposing questions.”

“In addition to the sheer volume of material, one is presented with the problem of internalizing the kinds of grandiloquent adventures Homer wrote about,” Mikeska said of her process. “I love the chance to tell this story from the point of view of a character who has, up until The Penelopiad, been considered a tangential participant.”

“I’m incredibly excited to tackle such an epic figure,” said Robyn Accetta, second-year MFA acting student, who plays Odysseus. “The opportunity to implement my movement and vocal work into embodying such a large mythic presence is daunting and thrilling at the same time.”

Marianes views the play as an “epic for millennials,” full of song and movement. Wyatt Brooks, a first-year theatre and computer science double major, is the show’s music director.

“To incorporate the anguish and pain as well as the joy and innocence throughout the score in ways that connected to the emotion of the piece was both my biggest struggle and my greatest accomplishment,” Brooks said. “I couldn’t be prouder of this cast and T. Lynn for giving me such gorgeous music to project upon.”

Marianes believes it is up to artists to create the myths that shape our lives.

“In re-examining The Odyssey through Penelope’s female lens, and in exploring the previously untold narrative of the Maids, together we are creating a new mythology for our modern world; a mythology of inclusion, empowerment and change,” she said.