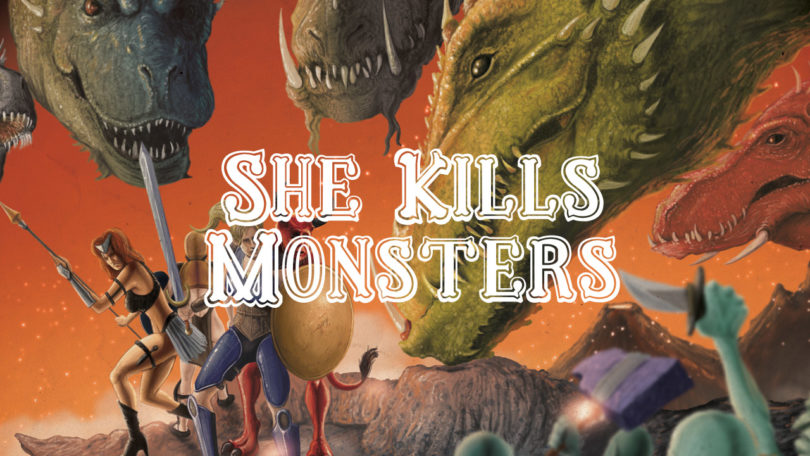 Tickets are $16 or $12 for UGA students and can be purchased online at ugatheatre.com/monsters, via phone at 706-542-4400 or in person at the Performing Arts Center or Tate Center box offices.

While five-headed dragons, demons and orcs populate the fantasy world of She Kills Monsters, the core of the story centers on high school teacher Agnes and her quest to find a meaningful connection with her recently-deceased sister, Tilly. After a car accident claims the lives of her family, Agnes dives headlong into her younger sister’s Dungeons & Dragons campaign with the help of Tilly’s nerdy friend Chuck. Along the way, Agnes must contend with demon queens, dark elves and vampire cheerleaders while battling her own real-life monster, grief.

With the nostalgic resurgence of “geek” culture in successful shows such as The Big Bang Theory and Stranger Things, the fantasy tabletop role-playing game Dungeons & Dragons has become more widely known to the general public after decades of sustained popularity amongst its die-hard fans. There is even a Dungeons & Dragons club at UGA that invites newcomers to learn the game, teaching amateur players the essentials of being an effective “dungeon master” who leads campaigns. The communal nature of the game and its emphasis on creativity appealed to lighting designer Travis Blansit, himself an avid player.

“D&D gives you permission to see or be whatever your imagination allows,” he said. “The possibilities are endless.”

According to Marotta, the disparities between reality and fantasy are key to depicting the world of Nguyen’s play.

“Agnes’ world is full of loss and a kind of scary uncertainty about what comes next,” Marotta said. “Tilly has invented an entire fantasy world within her Dungeons & Dragons campaign as a way of escaping her isolation—learning to enjoy the uncertainty in a way that provides her limitless expression.”

Through the use of puppetry, video projection, 3D-printed props, traditional costuming and makeup, the design team for She Kills Monsters is intent on bringing Tilly’s fantasy world to life on the stage.