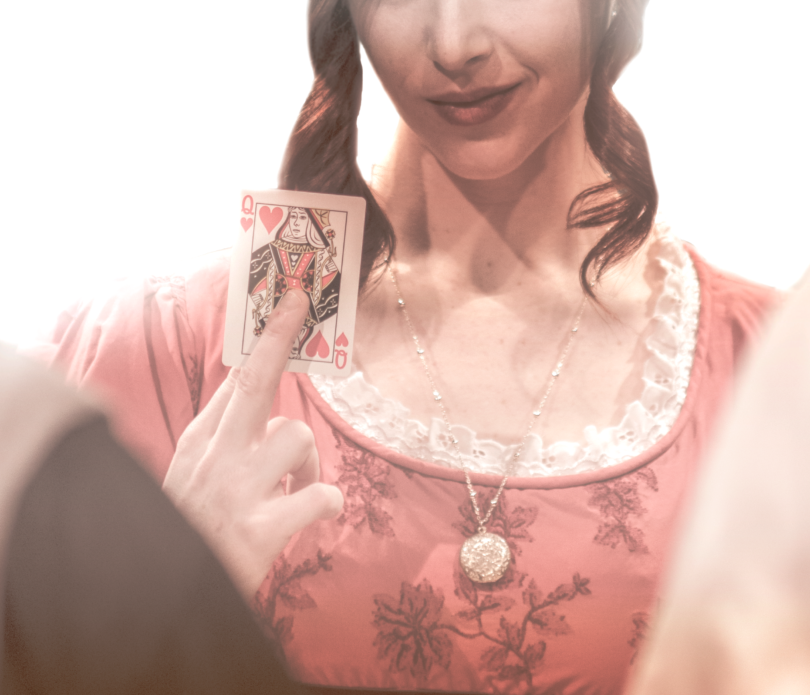 UGA Theatre presents Vanity Fair, Kate Hamill’s adaptation of the 1848 William Makepeace Thackeray novel. The play is directed by David Saltz and set in present-day Britain. Tickets are available for Feb. 25-29 and March 1.

Tickets are $16 and $12 for UGA students and can be purchased online at ugatheatre.com/vanityfair, via phone at 706-542-4400 or in person at the Performing Arts Center.

In Vanity Fair, two women—one born into privilege, another from the streets—attempt to navigate a society that punishes them for every misstep. Clever Becky Sharp is not afraid to break the rules; soft-hearted Amelia Sedley is too scared to bend them. Both strive for what they want, but neither can thrive without the other.

Thackarey’s novel, a bestseller in the 19th century, has been adapted often for stage and screen, most recently as an Amazon Prime mini-series.

“Kate Hamill’s adaptation is far and away my favorite,” said Saltz, professor and head of the theatre and film studies department in the Franklin College of Arts and Sciences. “It provides a fascinating glimpse of 19th century culture and mores that at the same time feels completely fresh, edgy and contemporary.”

Hamill is renowned for her vibrant adaptations of 19th century novels featuring strong female characters, such as Sense and Sensibility and Little Women. For three years running, the playwright has been among the top 10 most widely produced playwrights in the U.S. Her adaptation of Vanity Fair premiered in 2017 with Hamill herself playing Becky.

Hamill embraces the theatricality of Thackeray’s novel, placing the story in the hands of a theatre troupe for a “play within a play.” Saltz and his design team stage the play as a street performance in present-day Britain that takes place in front the façade of a Regency-era building, something that appealed to second-year MFA scenic designer Samantha Kuchta.

“Combining the historic character of the Regency period with the more current elements of a traveling troupe of actors, my aim was to visually mirror the strength and movement portrayed most heavily in the characters of Becky and Amelia,” Kutcha said.

“Taking note of silhouette, we have created costumes that speak to a period rather than portraying it with 100% accuracy because we are playing in a space that is not all one moment in time,” said Rachael Karas, a first-year MFA costume designer. “For Vanity Fair, the creative team wanted to play in a fluid time space as our actors tell this incredibly relatable story.”

“The power of theater is the transformation from the mundane to the extraordinary, and the players in Vanity Fair are leading their audience through that transformation,” Brown said. “By shifting the ambiance from busy England streets to the imaginary world the acting troupe is creating through their storytelling, the lighting will enhance the experience and help shape the world they are inhabiting.”