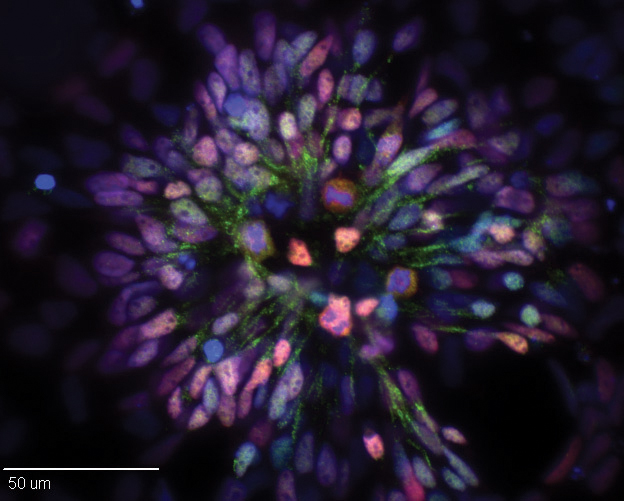 The results, published in Stem Cells and Development and based on the same process that neural stem cells use to develop in humans, allows the team to better understand degenerative neural diseases such as Alzheimer’s disease, Parkinson’s and ALS.

“For the first time, we really do have an animal blueprint, which mimics that of a human, and could potentially allow us to watch neuro diseases as they develop,” said Steven Stice, RBC director and the project’s principal investigator.

Stice, a Georgia Research Alliance Eminent Scholar and D.W. Brooks Distinguished Professor in the College of Agricultural and Environmental Sciences, has published extensively on the use of human neural progenitors, for which he holds an issued patent and more than 25 publications, specific to this cell type.

In previous studies, the initial cell groups stopped and started with pig embryonic stem cells, which are harder to source and sometimes differentiate into unwanted cell types, including neurons, liver and even muscle cells.

“The current publication lays out characteristics that the stem cells must have in order for them to differentiate toward a neural fate,” Stice said. “Certain markers on these cells suggest that they will have a greater propensity to develop into neural cells.”

Researchers initially thought that the adult brain, through the use of stem cell therapy, was largely untouchable and unable to make new neurons and regenerate.

“The problem is once you take that (induced pluripotent stem) cell and place it in the brain, it will turn into every cell type possible, and then cause a tumor to form,” said Franklin West, an assistant professor of animal and dairy science in the college and one of the investigators on the project. “So instead, you take that cell and turn it into a neural stem cell first-then the only thing it will ever form are neural stem cell type.”

What the team did was not a simple process. First, they extracted cells from a pig’s skin and reprogrammed them to become induced pluripotent stem cells. Then, with the aid of protein marked technology used for cell identity and characterization, the cells were trained to become neurons.

The beauty behind this technology is the team can now generate millions—literally bucket loads—of cultured neurons. Advancing this technology from bench to clinical investigation has become a reality.

“In the past, the problem was not having a good way of testing these cells to see how they would function or work,” Stice said. “Now, because we were able to mimic the same development path in pigs as in humans, it’s no longer a concern.”

Stice pointed out that past articles published in Nature Biotechnology lay claim to the fact that the U.S. Food and Drug Administration strongly encourages the overall design of regenerative toxicology studies should mimic the proposed clinical trial design as closely as possible.

“After all, the ultimate goal is, of course, to develop treatments for human patients and to conduct further safety and efficacy studies,” Stice said.

With this new technology, Stice plans to continue seeking grants from the National Institute of Neurological Diseases and Disorders and private funding for ALS and Alzheimer’s.