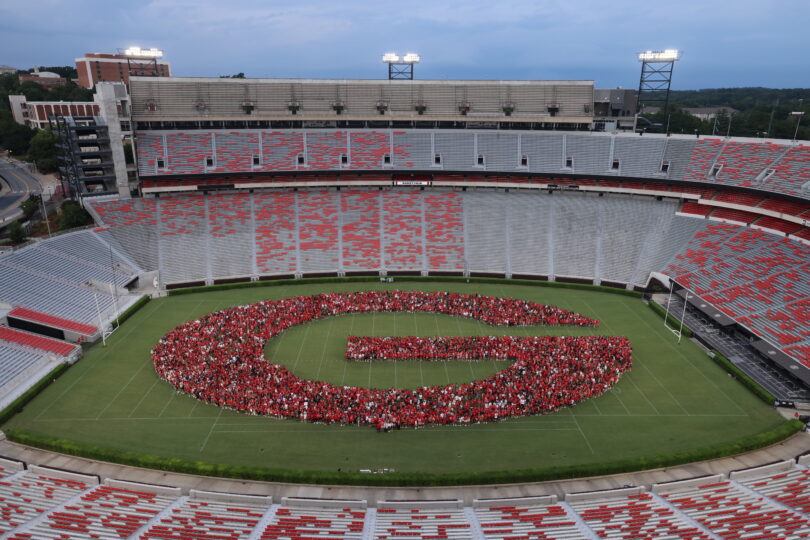 Incoming students in the Class of 2026 formed the “power G” under the Sanford Stadium lights and between the hedges for Tuesday’s Freshman Welcome. (Peter Frey/UGA)

The University of Georgia’s class of 2026 is its biggest and one of its most academically qualified yet. More than 6,200 new first-year students start classes at UGA Aug. 17, selected from a record number of nearly 40,000 applications.

The students have impressive academic achievements, high school GPAs and test scores. They also excel outside the classroom, with extracurricular participation and service to their communities.

The rigor of students’ high school coursework relative to what is available at their school remains a key factor in admissions decisions at UGA. The first-year students arrive with an average of nine Advanced Placement, International Baccalaureate or dual-enrollment courses. The class has an average high school GPA of 4.12, the sixth consecutive year that the average weighted high school GPA of the entering students exceeds 4.0. The class of 2026 also posts an average ACT score of 32, tying last year’s record, and an average SAT score of 1384. 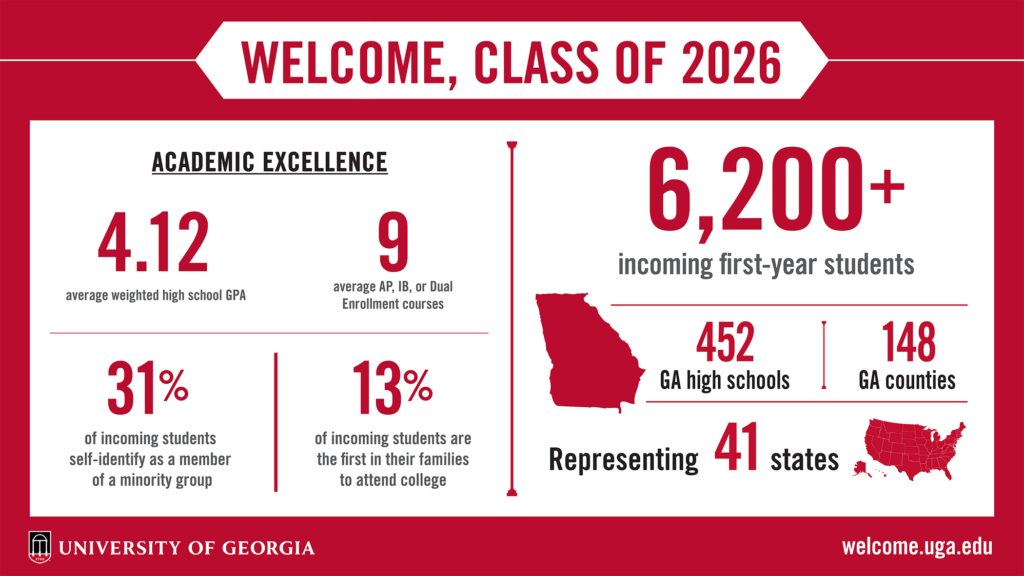 “The University of Georgia is thrilled to welcome such an extraordinary class,” said President Jere W. Morehead. “As UGA continues to set new standards in undergraduate education, we are attracting the very best students, who want to engage with our academic community and begin making a difference from their first semester on campus.”

Although final demographic data won’t be available until after the semester begins, preliminary data show that 31% of incoming students self-identify as a member of a minority group. Thirteen percent of first-year students are the first in their families to attend college, up from 8% last year. The incoming class includes students from 452 Georgia high schools, 148 Georgia counties, 41 states and 18 countries.

“It is amazing to see a class that is so intelligent, creative, resilient and tremendously diverse,” said Barkley Barton II, director of undergraduate admissions. “The entire class of 2026 is poised to become leaders and entrepreneurs and to have a positive impact on the UGA community and the global society.” 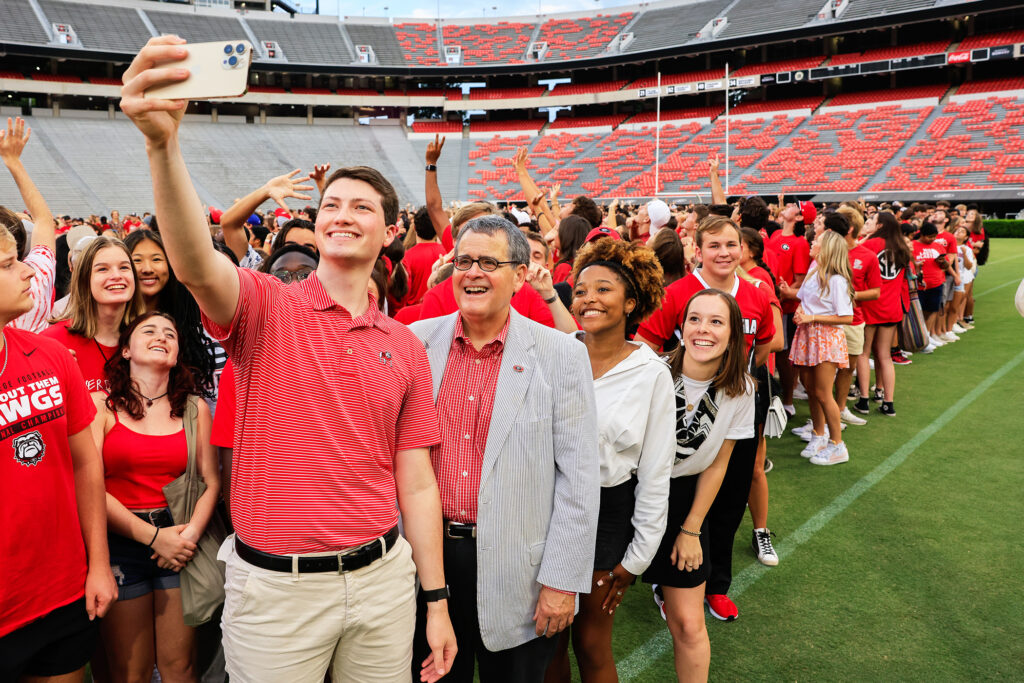 President Jere W. Morehead takes a selfie with students as they formed the “power G” during Freshman Welcome in Sanford Stadium. (Chamberlain Smith/UGA)

Around 1,700 transfer students also are beginning their studies at UGA this week, supported by resources such as the Transfer Student Experience Success Pathway. About one-third of UGA’s graduates enter the university as transfer students.

At the graduate level, approximately 2,500 students representing 45 states and 72 countries are beginning their studies at UGA. They are joined by nearly 500 incoming professional students in law, veterinary medicine and pharmacy. In addition, the Augusta University/UGA Medical Partnership recently welcomed 60 first-year medical students.

UGA is launching an Active Learning Initiative, a $6 million project to foster a culture of active learning on campus, in which students are active participants in the classroom and learn by constructing knowledge rather than merely absorbing it. This investment will transform classrooms into more flexible learning spaces, train faculty in active learning practices, and support students as active learners. UGA is already renovating classrooms across campus to make learning more active—15,729 students took classes in updated classrooms in fall 2021.

UGA recently established a School of Computing to keep pace with increased student demand for computer science and related courses. The school, which is jointly administered by the Franklin College of Arts and Sciences and the College of Engineering, also will oversee courses in cybersecurity and privacy. The school will collaborate with UGA’s Institute for Artificial Intelligence, Institute for Cybersecurity and Privacy, Georgia Informatics Institutes, and Center for Cyber-Physical Systems and other academic programs. The Board of Regents recently approved a new Master of Data Science, a joint program between the School of Computing and the department of statistics, as well as a new Ph.D. in Artificial Intelligence, offered by the Institute for Artificial Intelligence.

“We want this incoming class to succeed in the classroom,” said Vice President for Instruction Marisa Pagnattaro. “Every member of this incoming class will engage in experiential learning activities such as internships, research and service-learning prior to graduation. We’re working to expand hands-on learning opportunities for students and to provide scholarships to students who need them. We’re confident that the very bright class of 2026 will do great things, and we’re here to support them on their journey.”

UGA students are well prepared for success after graduation. Of the students who graduated in the class of 2021, 92% percent were employed, attending graduate school or engaged in post-grad internships within six months of graduation, according to career outcomes data released by the UGA Career Center.

“By connecting promising students with world-class faculty members who are the best and brightest scholars in their fields, the University of Georgia is contributing to the vitality of our state and world by educating the next generation of leaders,” said S. Jack Hu, the university’s senior vice president for academic affairs and provost. “We are excited about the upcoming academic year and the new opportunities in teaching, research and service it brings.”