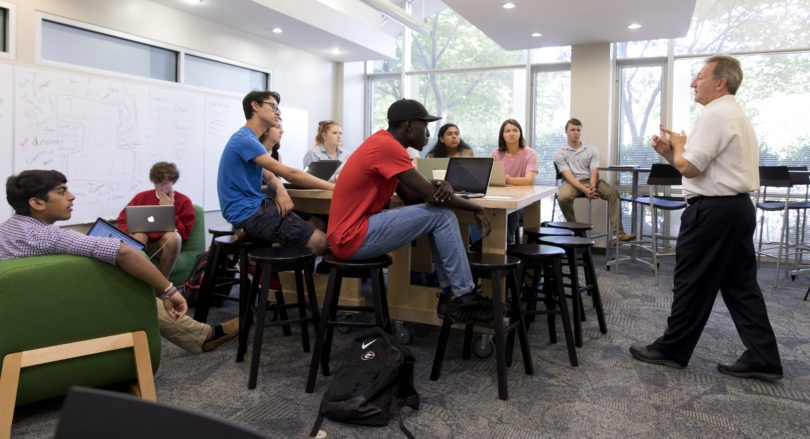 Academic enhancements over the past several years include experiential learning for all undergraduate students and initiatives to reduce class sizes and promote engagement, entrepreneurship and innovation.

A record 29,300 students applied for admission to the University of Georgia this fall, and 5,500 outstanding students will begin their classes today. Along with stellar academic credentials, the Class of 2023 brings to the birthplace of public higher education a commitment to academic excellence.

The rigor of students’ high school coursework relative to what is available at their school remains a key factor in admissions decisions, and the Class of 2023 brings an average weighted high school GPA above 4.0 and a record average of nine Advanced Placement or International Baccalaureate courses. For comparison, the average weighted high school GPA of incoming students was 3.91 just four years ago, and the average number of AP or IB courses was 7.

The standardized test scores of incoming students continue to place UGA among the nation’s most selective public universities. The average SAT score is 1359 while the average ACT score of the incoming class is a record 31. The scores range from 29 to 33 on the ACT and 1260 to 1430 on the SAT for the middle 50%, which forms the majority of the incoming class.

“The high caliber of our student body is one of the many distinguishing features of the University of Georgia,” said President Jere W. Morehead. “As we continue to enhance the learning environment and set new standards in undergraduate education, we are ensuring that each student who graduates is ready to make a positive impact on the world.” 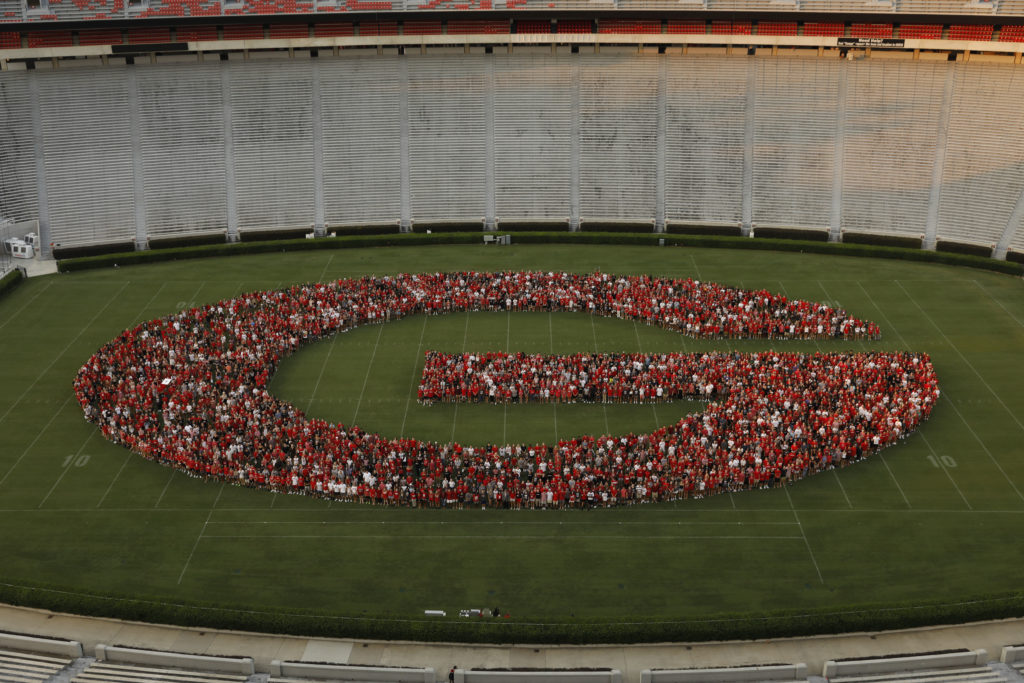 Eighty-two percent of the Class of 2023 are Georgians, and 91% of Georgia counties are represented among the incoming students.

The number of incoming students who are members of a racial or ethnic minority has risen by 14% since 2015, and one out of three students in the Class of 2023 is a member of a minority group. The Class of 2023 includes students from 43 states and more than 40 countries around the world. Eighty-two percent of incoming students are Georgia residents, and they come from 91% of Georgia counties.

UGA’s nationally recognized Honors Program accepted 671 extraordinary students who boast an average weighted GPA of 4.24, an average SAT of 1505, and an average ACT of 34. Just over 1,400 transfer students are beginning their classes at UGA this fall as well.

The number of applicants to UGA has risen by 40% over the past five years in conjunction with the university’s growing reputation for academic excellence. Academic enhancements over the past several years include experiential learning for all undergraduate students and initiatives to reduce class sizes and promote engagement, entrepreneurship and innovation.

To share information about college preparedness and the personalized learning environment that UGA provides, the Office of Undergraduate Admissions, the Office of the President, and other campus units travel across the state of Georgia and beyond to meet with prospective students.

The university held more than 400 off-campus events over the past recruitment cycle that reached students in 146 of Georgia’s 159 counties. A program known as Road Dawgs, through which UGA students use their spring break to visit high schools and share their experiences, is now in its fourth year. This year, the group traveled to areas affected by Hurricane Michael—including Cairo, Bainbridge and Albany—and also visited schools in Norcross and Snellville. 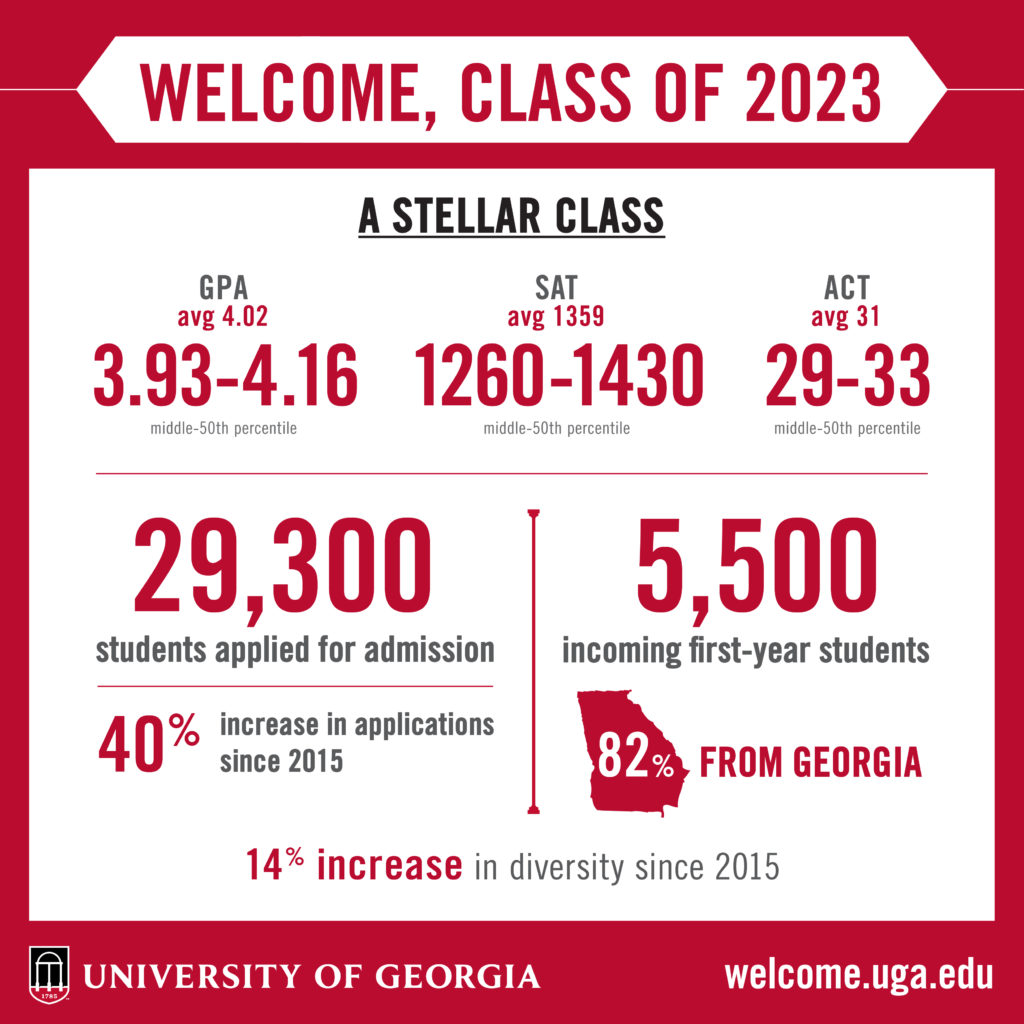 “Demonstrated academic performance and rigor of high school curriculum are primary factors in the admissions process,” said Patrick Winter, UGA’s associate vice president for admissions and enrollment management. “Beyond the numbers, which can fluctuate from year to year, factors like leadership, creativity, service and impact within their high school community are also given strong consideration in selecting a class.”

Members of the Class of 2023 begin their studies at a time when measures of student success, along with UGA’s national stature, are at record heights. Three out of every four UGA students earn their degrees in four years plus one semester, and the most recent data from the university’s career outcomes survey shows that 96% of recent graduates are employed or in graduate school within six months of graduation—a figure that is 12% higher than the national average.

“As educators, we are committed to providing students with learning experiences that facilitate transformative growth and discovery,” said S. Jack Hu, the university’s senior vice president for academic affairs and provost. “Our incoming students have demonstrated the potential to be leaders in a wide range of fields, and we are very pleased to welcome them to the University of Georgia.”