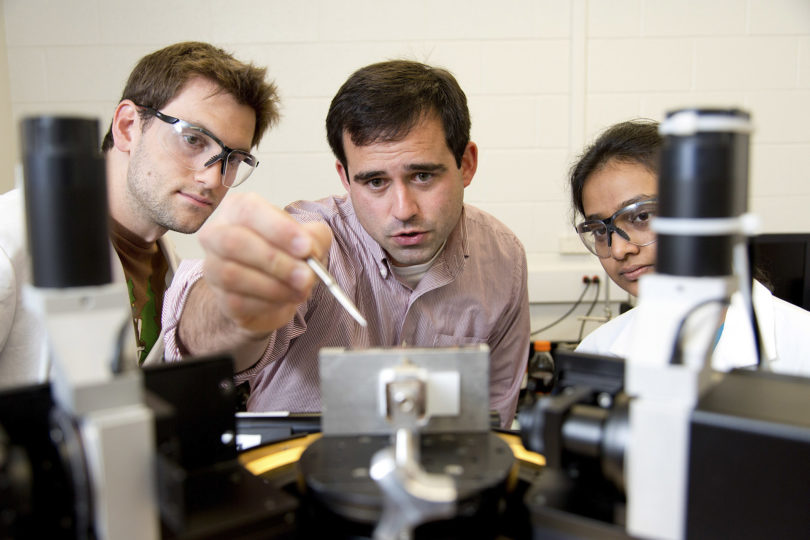 This photo of professor Jason Locklin

UGA public relations and communications professionals were recognized with five awards at the Council for Advancement and Support of Education District III conference Feb. 16-19 in Orlando.

Andrew Davis Tucker, a photographer in the Office of Public Affairs’ broadcast, video and photography unit, won a Special Merit Award for Best Photographer of the Year. Twenty-one of Tucker’s photographs were submitted for consideration.

Nancy Evelyn, a photographer in the Graduate School, received a Special Merit Award for Photography-Individual. Her photo “Brain Study” has Michael Amlung, a winner of the 2012 Graduate Student Excellence in Teaching Award, posing among three models of human brains.

A donor birthday card designed by Mary Andrews, a senior graphic designer in the Office of Public Affairs’ publications unit, won a Special Merit Award in the Specialty Piece category.

In addition to the individual awards, the Graduate School Magazine also won a Special Merit Award in the Magazine II section.

“This work reflects well on the individual professionals involved and on the university as a whole,” said Tom Jackson, vice president for public affairs. “Such professionalism helps us better tell our many audiences the stories illustrating UGA’s excellence.”

The Council for Advancement and Support of Education is an organization that serves universities and colleges as well as their advancement professionals who work in alumni relations, communications, development, marketing and other areas.