An alligator in the Okefenokee Swamp. (Submitted photo)

A partnership between University of Georgia researchers and the Okefenokee Swamp Park focuses on conservation and education efforts needed to maintain the swamp’s native alligator population, which is vital to the economic vitality of the region.

On Aug. 27, UGA’s Marine Extension and Georgia Sea Grant and the Okefenokee Swamp Park signed a commitment to continue its Alligator Education and Research Project, work that informs the OSP on conservation and management of the swamp, provides a better understanding of alligators and enhances wildlife education. 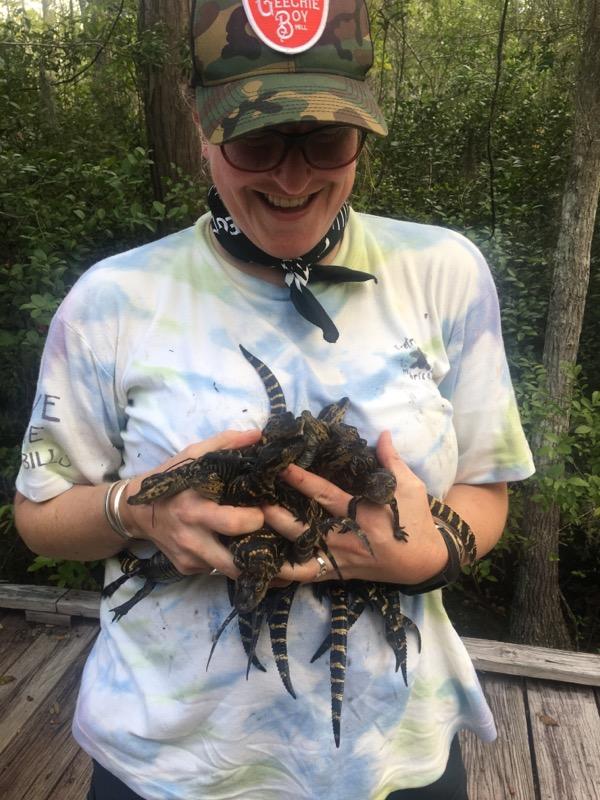 “Applied research like this project in south Georgia is helping communities throughout the state address critical, local challenges,” said Jennifer Frum, vice president for UGA Public Service and Outreach. “This is a great example of how UGA is fulfilling its mission as Georgia’s land-grant and sea-grant institution.”

The OSP first began funding the project in 2017 and since then UGA scientists have conducted field research in the swamp, located on the Georgia-Florida border, to inventory the current alligator population by sex, age and size.

“The American alligator remains a conservation concern for a number of reasons, including human persecution and loss of native habitat,” said ecologist Kimberly Andrews, a faculty member with UGA Marine Extension and Georgia Sea Grant. “It is important for us to understand how these reptiles are adapting to survive in a human-dominated environment.”

Using satellite tags and cameras, Andrews and her team at UGA have tracked seven adult alligators in the swamp, observing interactions between the sexes and age classes, courtship between males and females, maternal care and interaction with other species, such as bears or otters.

They regularly survey areas of the swamp to get approximate counts of the alligators there and their activity levels during day and night, from season to season and under changing environmental conditions.

… the results of the alligator research have already changed the way many people view this apex predator and we look forward to increasing our collaboration for years to come.” — Dr. William Clark

So far, their research has shown that adult females and their guarded young, ages 1 to 3 years, are typically the most visible while the males are on the move and the mid-size subadults are more covert. Alligator activity and their visibility in the swamp is influenced by social structure and the presence of dominant individuals and changes in environmental conditions, such as temperature and rainfall.

“We are excited to renew our partnership with Dr. Andrews and UGA Marine Extension and Georgia Sea Grant,” said Dr. William Clark, an ophthalmologist in Waycross and chair of the OSP Board of Trustees, a nonprofit organization. “So far, the results of the alligator research have already changed the way many people view this apex predator and we look forward to increasing our collaboration for years to come.”

Alligators are a conservation success story: they were the first species to be listed federally as an endangered species. Alligator farming replaced the overharvesting from the wild that caused their decline and alligator populations began to rebound.

Alligators are apex predators, consuming a diversity of food sources and regulating prey populations. At the swamp, researchers have seen that a single adult alligator may eat prey that range in size from a moth to a deer. When alligators are lost from a system, this balance is lost and the ecosystem instability impacts many other species, including people who rely on predators to manage prey populations, such as deer, that pose risk to our safety when overabundant.

Alligators are the engineers of their economy, creating habitat that is used by other smaller animals. During drought, alligators create “wallows” or use den sites that retain water after it becomes scarce in other areas. These wallows can be critical for breeding habitat for frogs. The loss of alligators in some ecosystems has contributed to subsequent declines in amphibian populations in many of their habitats where they have been removed.

The Okefenokee is the largest blackwater swamp in North America, serving as the headwaters of the St. Marys and Suwanee rivers. Most of the swamp is located in Southeastern Georgia and is considered one of the seven natural wonders of the state. Protected largely by the Okefenokee National Wildlife Refuge and the Okefenokee Wilderness, the swamp has an array of habitats including cypress swamps, peat bogs, marshes, open lakes and wooded hammocks. The diversity of ecosystems encompasses an assortment of over 620 plant species (including four carnivorous plant species), 39 fish, 37 amphibian, 64 reptile, 234 bird and 50 mammal species.