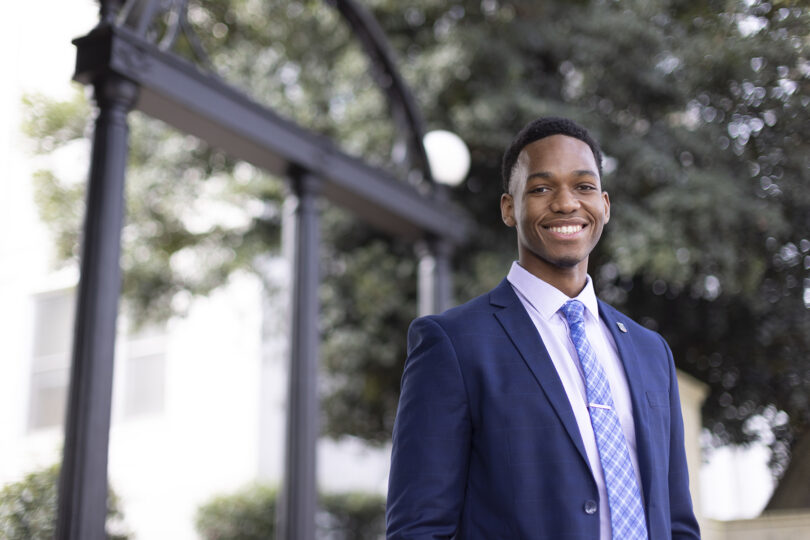 Kevin Nwogu is a fourth-year student in the Terry College of Business, working toward a BBA in management and a minor in leadership in student affairs as part of the Class of 2022. (Photo by Peter Frey/UGA)

Kevin Nwogu’s journey with the University of Georgia began while he was still a student at Stephenson High School in Stone Mountain.

Nwogu watched his older sister come to UGA as part of the class of 2021, and through visits with his sister and driving her to and from campus, Nwogu became familiar with the UGA community. He watched his sister thrive the minute she stepped foot on campus, and that environment solidified his desire to come to this university.

“Anytime I was on the campus, I just automatically felt welcomed by other students,” he said.

Nwogu is the undergraduate student recipient of the 2022 President’s Fulfilling the Dream Award. Nwogu is a fourth-year student in the Terry College of Business, working toward a BBA in management and a minor in leadership in student affairs as part of the Class of 2022.

Over the past four years, Nwogu has been an exemplar student who has given back to his university community in a variety of ways.

“Throughout my time at the university, I have done my best to learn from my peers, to serve them and to really just find ways that I can grow and thrive and become the best young man that I can be today,” he said, speaking at the University of Georgia Freedom Breakfast which recognizes students, faculty, staff and community members in their efforts to continue the legacy of Dr. Martin Luther King, Jr.

Before becoming a Bulldog, Nwogu participated in the Georgia African American Male Experience (GAAME), which brings high school aged Black males to campus to give a tour and introduces the students to other Black males on campus.

Nwogu said it showed him that “there are people on this campus that look like us and have experiences similar to us.”

Once stepping foot on campus as a UGA student, Nwogu wasted no time getting involved in student organizations and getting to know the Athens community.

Nwogu serves as a GAAME ambassador, was an orientation leader during the summer of 2020, joined the UGA Mentor Program as an ambassador, serves as president of the Student Alumni Council, contributed to the SGA First Year Program, was a peer leader for Forum, was a LSAMP summer bridge counselor, was a member of the Black Male Leadership Society and a member of the Black Affairs Council. Nwogu was also a UGA Amazing Student in June 2021 and grant winner from the Giving Voice to the Voiceless endowment at UGA.

As involved as Nwogu is in the UGA community, he has always kept a connection to Stephenson High School.

“I didn’t want to go to the University of Georgia and never look back,” Nwogu said of his relationship with Stephenson.

Using the Giving the Voice to the Voiceless grant and other fundraising efforts, Nwogu started a scholarship for Stephenson High School students that provides mentorship, professional/academic/personal development, and opportunities to serve within their community. The Servant Leader Scholarship, named after a phrase commonly used by King, has awarded $500 each to five students since its inception. 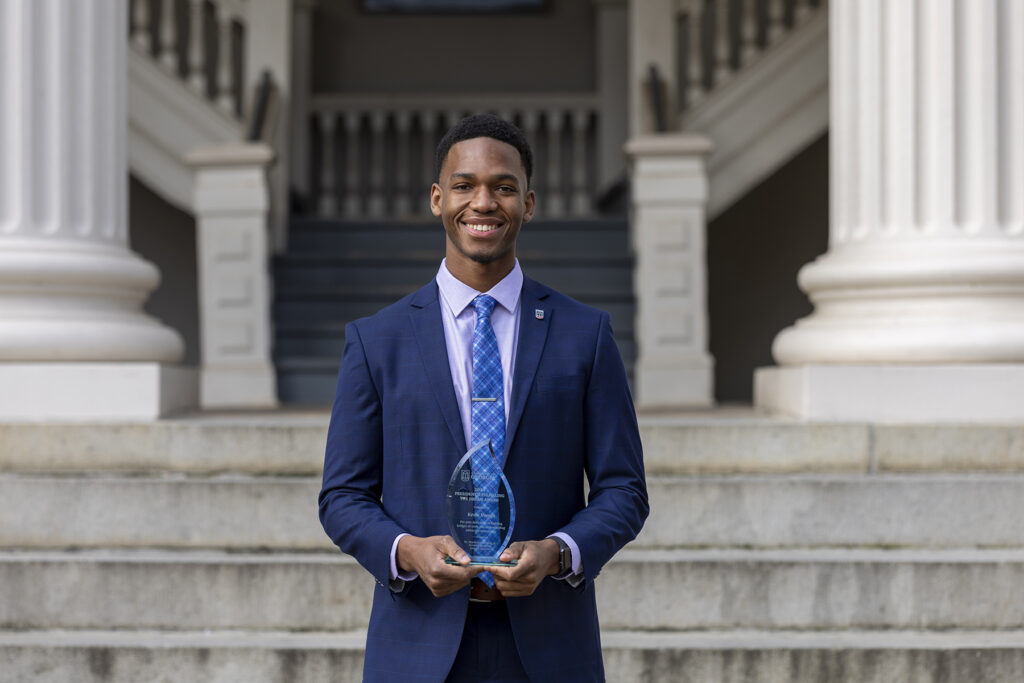 Kevin Nwogu is the undergraduate student recipient of the 2022 President’s Fulfilling the Dream Award. (Photo by Peter Frey/UGA)

“I always wanted to give back, but I always thought I would have to wait until I’m in my 30s with more money. But really, you can help out in whatever way you can,” he said.

Nwogu was surprised during the first year of fundraising for his Servant Leader Scholarship how much support he received from students and faculty of UGA, who often had no connection to Stephenson High School but just wanted to contribute.

“It was awesome to see the buy-in and the support that people have when you do have a vision, and you’re passionate about it,” said Nwogu.

Nwogu became deeply ingrained in the Athens community and started a project with a fellow UGA student to document the stories of Athens locals through a video project titled “Arcs of Athens.” Hoping to mimic the storytelling of Humans of New York, a photojournalism project, Nwogu hit the streets of Athens to talk to real people about their stories and uploaded the videos to YouTube.

He says this one-on-one experience only contributed to his willingness to put service first in his own life.

“I’ve always been taught that it’s not enough that I succeed on my own. I must look to my left, my right, my front and my back, and care about what happens to the others around me.”

Following Nwogu’s undergraduate graduation in May, he will be moving to Chicago after accepting a job as a solutions consultant for Google. He is excited about what the future holds in a new city and gives this advice to anyone hoping to do their part in continuing the King legacy: “Think about what your vision is and what you want to do and realize that there are so many people around you who will support you. Every little thing counts, whether it’s starting a scholarship or going back to your high school to tutor or giving a free ride or paying for someone’s groceries.”

That’s a reflection of Nwogu’s favorite quote from King: “Life’s most persistent and urgent question is, ‘What are you doing for others?’”