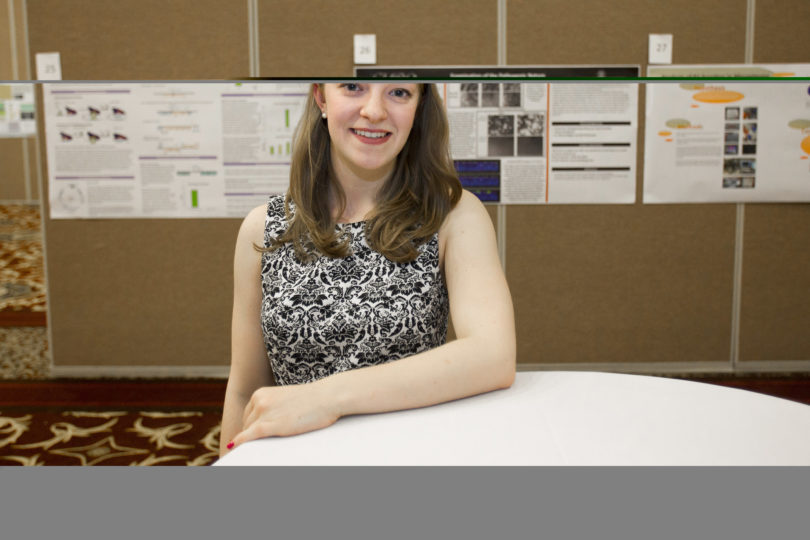 Chiara Tondi Resta presented research at the 2014 CURO Symposium that focuses on a marble statue of Aphrodite.

In the span of two days, more than 250 undergraduate students presented original research in this year’s Center for Undergraduate Research Opportunities Symposium.

In addition to delivering oral presentations, students also displayed nearly 120 posters describing their research. The amount of research presented at this year’s symposium, which is overseen by the Honors Program but open to all UGA students, necessitated an extra day as the symposium was expanded from a one-day event last year to a two-day event this year.

The concurrent oral presentations at this year’s symposium ranged in topic from innovations in social media to social behavior among burying beetles to Norse mythology in popular culture.

Chiara Tondi Resta presented research that focuses on a marble statue of Aphrodite held in the North Carolina Museum of Art. She is the first person to conduct substantial research on this statue, which, to her, was the most exciting part of the project.

“Original research in the humanities doesn’t come up a lot,” she said.

Tondi Resta met with her mentor, Mark Abbe, an assistant professor in the Lamar Dodd School of Art, for three hours every week since January. Both Abbe and Tondi Resta were new to CURO, and that mutual learning experience went a long way in shaping her research, she said.

Joseph Hopkins, a fourth-year student majoring in Germanic studies and philology, got a chance to think out of the box for his project. He researched something that isn’t taught at UGA: Norse mythology.

“A lot of the stuff I research isn’t covered at UGA at this time,” Hopkins said. “CURO gave me a chance to do that.”

Hopkins spent part of the summer of 2013 in Copenhagen through a CURO Summer Fellowship. Additional funding was courtesy of the Germanic and Slavic studies department, which is part of the UGA Franklin College of Arts and Sciences. He conducted interviews in Copenhagen, which he then compared to interviews he conducted in Athens, to determine cultural differences in how Norse mythology is viewed and portrayed.

“CURO gave me a lot of freedom to work with,” Hopkins said. “The fact that you can take your research abroad without all the red tape was incredibly beneficial.”