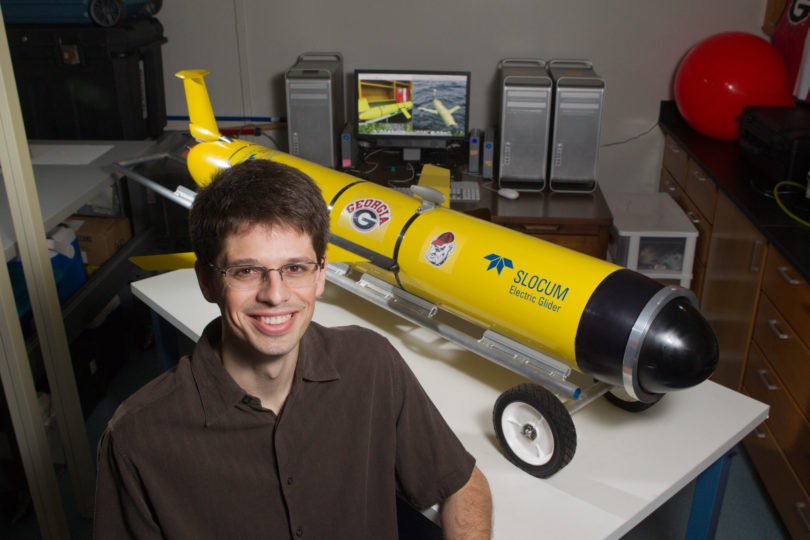 UGA will launch its first robotic submersible later this year, joining a growing number of research institutions that use the efficient and cost-saving instruments to explore the oceans.

Renato Castelao, a physical oceanographer at UGA, and Ruoying He of North Carolina State University will launch two autonomous underwater vehicles called gliders in the fall. UGA’s Salty Dawg and NCSU’s Salacia, named for the Roman goddess of salt water, remotely will collect data on the exchange of water between the coastal ocean off Georgia and the Gulf Stream.

“The oceans are chronically under-sampled, and it is difficult and expensive to deploy traditional instruments in the water to measure them,” said Castelao, an assistant professor of marine sciences in the Franklin College of Arts and Sciences, and the project’s principal investigator. “Gliders provide a cost-effective way to increase the number of observations we collect by the sheer number and detailed analysis of samples they can collect over time.”

The Gulf Stream is a powerful ocean current that runs from Florida up the Eastern Seaboard and across the Atlantic Ocean. Along its route it influences fish and shellfish populations, weather and even ship fuel usage. Tendrils of the current, known as eddies, shear off from the Gulf Stream and move from the deep ocean toward the continental shelf, which extends for miles underwater from the shore. The eddies—which are colder and saltier than the more shallow coastal waters and carry many nutrients—are thought to provide a major food source for marine life.

The glider—which looks like a torpedo with fins—moves forward when the nose cone fills with seawater, causing it to sink at an angle. At the desired depth, the glider discharges the water and slants upward again toward the surface, where the action is repeated. The speed is slow but steady, about 12 to 15 miles daily in an up-and-down, sawtooth pattern.

As it rises and falls, the instrument-packed glider samples seawater at different depths and send reports via satellite to a laboratory, where researchers download the data and monitor the vehicle’s progress. Except for launch and recovery, researchers stay on dry land.

Using a $775,616 grant from the National Aeronautics and Space Administration, Castelao and He first are mapping the eddies using data from NASA satellites.

Once mapped, the researchers will launch the gliders to measure the properties of seawater in and near the eddies. They will analyze water at different depths for temperature, salinity, chlorophyll, dissolved organic matter, light and oxygen levels, and the speed of the currents.

The measurements will be correlated with the satellite data to provide a more detailed picture of eddy activity.

“Knowing where particular water temperatures and salt levels occur is very useful for fishermen, because different species of fish prefer different habitats,” Castelao said. “Providing that information to fishermen will help them reduce catches of unwanted species and lower their fuel costs.”

Salty Dawg will go on its first test voyage this fall. Starting in 2014 and continuing through 2016, the gliders will traverse the entire width of the continental shelf, from about 15 to 70 miles off the coast, going all the way from Georgia to North Carolina.

Each glider deployment will last approximately one month. The data they collect will be uploaded in real time to a publicly accessible website, where it can be used by researchers and fishermen to plan trips, and by students to learn more about ocean conditions.